Fierce military operations may eliminate individual terrorists, but do nothing to destroy their strategy. Some analysts go as far as to argue that excessive force only encourages hatred, boosting the networks that nurture new recruits. In the second article of this two-part series, author Michael Krepon suggests that India – with almost 20,000 civilians killed in terror attacks since 1994 – has reason to pursue terrorists based in Pakistan. Yet, India has exercised restraint when it comes to retaliating against terrorist attacks with suspected links to Pakistan-based groups, resisting opening another front in the war on terror. Both nations hold nuclear weapons, so opening that front could be disastrous. The Bush administration, proud of improving relations with both nations, would face a dilemma about which side to support if such a confrontation emerged. Embroiled in crises with Iraq and Afghanistan, the US cannot expect India to act with restraint against acts of terror, and yet any action against Pakistan would provoke an explosive reaction in the country. Krepon urges the nations battling terrorism to take preventive actions, developing heightened security as well as pursuing delicate diplomacy that could reconcile competing interests. – YaleGlobal 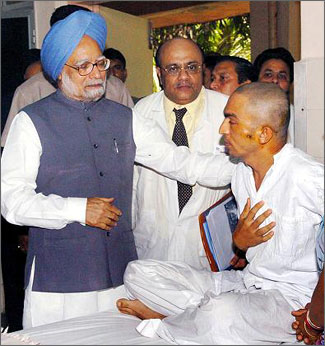 Patience for how long? Prime Minister Manmohan Singh comforts a Mumbai train bombing victim, but there is worry about the limit to India's restraint. (Photo: Reuters)

WASHINGTON: When you have a hammer, every problem can look like a nail. But when a hammer is used to deal with the problem of terrorism, the nails can multiply. The US is learning this painful lesson in Iraq, and Israel seems to have relearned it in Lebanon, where Israeli military campaigns first created Hezbollah and now greatly empowered it. The development of power projection capabilities takes hard work and considerable expense. But it takes real wisdom to know when and how to use military power to combat terrorism. Without wisdom, power projection can be negated, while producing adverse, unintended consequences.

One dog has yet to bark in what President George W. Bush calls the “global war on terror.” Since 1994, India has suffered almost 20,000 fatalities as a result of acts of terror, losses that dwarf those suffered by the US and Israel. Despite these losses, New Delhi has been very reluctant to initiate cross-border military strikes against targets based in Pakistan, where supporters and perpetrators of acts of violence directed against India have found safe haven.

Pakistan is an essential partner in fighting terrorism, but is also an incubator of terrorists. This paradox, which has long confounded US and Indian leaders, is most evident in Kashmir and the Pashtun belt along Pakistan’s border with Afghanistan. If or when the Indian government feels compelled to retaliate militarily against acts of terror, it is likely to do so across the Line of Control that divides Kashmir. Prediction in such matters is hazardous, given New Delhi’s record of prior restraint, which also makes the element of surprise more likely. Cross-border military operations would open another “front” in the war against terror, one in which both adversaries possess nuclear weapons.

A face-off involving India and Pakistan would therefore be quite different from the military campaigns waged by the United States and Israel. To begin with, the use of force would presumably be far more glancing and circumspect. Prior wars between these two rivals, which were joined at the hip until partition in 1947, have been limited in scope. But choreography in warfare is a tricky business, and any new front in the global war against terror – especially in South Asia – poses huge risks, including risks for the Bush administration.

The Bush team has prided itself on improving bilateral relations with both India and Pakistan. This significant accomplishment could be destroyed in the event of military hostilities on the subcontinent. As the victim of terrorism, India would naturally expect the sympathy and support of the Bush administration. If, instead, Washington seeks to play an evenhanded, honest-broker role, the vaunted strategic partnership sought by the Bush team would be placed at risk. And if Washington aligns with another democracy under threat by Islamic extremism, its relations with Pakistan would plummet, with potentially far-reaching consequences for the war against terror, domestic politics in Pakistan, Afghanistan’s future, proliferation and India-Pakistan relations.

The initiation of another limited war between India and Pakistan would also test the “stability-instability paradox.” This academic construct – an offshoot of deterrence theory – holds that two nuclear-armed rivals will rile each other, but will avoid crossing the nuclear threshold. So far, both elements of the stability-instability paradox seem very much in place on the subcontinent. India and Pakistan have experienced a succession of crises and one limited war since acquiring nuclear weapons – without producing mushroom clouds. But academic theories are neat and tidy, whereas crises and warfare can take unexpected and unwanted turns.

Clearly, much could go wrong if successive acts of terror lead to skirmishing between India and Pakistan, which means that much is riding on New Delhi’s state of mind regarding its chronic difficulties with Pakistan. The US has served as the crisis manager in previous nuclear-tinged confrontations, a role that was greatly facilitated by the reluctance of Indian leaders to go to war, even after grievous acts of terror. In the last such effort, the Bush administration brokered a climb-down from a 10-month-long military mobilization triggered by an attack on the Indian parliament building in December 2001.

The Bush team is not well positioned to play this role again. The White House and State Department have their hands full in dealing with wars in Iraq, Lebanon, Palestine and Afghanistan, as well as with the nuclear ambitions of Iran and North Korea. The administration has waged wars in Iraq and Afghanistan predicated on the imperative to root out distant dangers before Americans again suffer the consequences of terrorist acts at home. Having embraced a proactive role in fighting terror, and having backed Israel’s military campaign against Hezbollah in Lebanon, the Bush administration is in no position to counsel New Delhi to exercise restraint.

The last crisis between India and Pakistan was defused by then-Deputy Secretary of State Richard Armitage, who in 2002 extracted a pledge by Pakistani President Pervez Musharraf to “permanently” end cross-border violence directed against India by Islamic extremists. This pledge and others like it from Musharraf make it more difficult to defuse another crisis preceded by heightened infiltration across the Kashmir divide and by bomb blasts at sensitive locations in India.

Since the last exercise of US crisis management, Pakistan’s list of grievances with the United States has grown considerably, while India has become the Bush administration’s most favored up-and-coming regional power. Most recently, New Delhi has been gifted with a nuclear cooperation agreement that Bush pointedly declined to offer Islamabad. This deal was strongly supported on Capitol Hill by US business interests and by the Indian-American community, which views the “Jewish lobby” as its model. With Republicans unwilling to undercut the White House, and with Democrats unwilling to offend the Indian-American community in an election year, the Congress shunted aside substantive concerns to endorse this deal overwhelmingly.

If, after this sequence of events, India suffers horrific acts or terrorism, New Delhi has every reason to expect US support if it decides to strike “terrorist camps” and other targets across the Line of Control. And if New Delhi gets that backing, Pakistan could well explode.

The Bush administration has long wanted to “de-hyphenate” India-Pakistan relations. If this dreaded scenario plays out, de-hyphenation could be shunted aside by a stark either/or choice. President Bush’s famously simple formula – are you with me or against me in the war on terror? – could conceivably be played back at him. Then the Great Simplifier would face an excruciating choice: whether to lose one strategic partner or two.

Because this scenario is sufficiently grim and plausible, preventive action in India and Pakistan is worth taking in the form of heightened domestic security against extremist groups and renewed diplomacy. A disproportionate share of this burden falls on India because its leaders understand far better than their counterparts in the US and Israel that military power is not well suited to combat terrorism. But at some point, reaching for the hammer could become New Delhi’s unwelcome choice.

Michael Krepon is the co-founder of the Henry L. Stimson Center, the editor of Nuclear Risk Reduction in South Asia, and the author of Cooperative Threat Reduction, Missile Defense and the Nuclear Future, both published by Palgrave Macmillan.