Human beings have occupied most of the inhabitable surface of the earth for tens of thousands of years, but only recently have we had the means to accurately determine where on Earth we actually are. The technology that supports this is one of a new breed of global utilities and, surprisingly enough, comes free - compliments of Uncle Sam. Global Positioning System (GPS) technology allows or enhances many of the things one takes for granted in the modern world, like cell phones or the accurate navigation of airplanes. Recently, the emergence of potential competitors in Europe and China has raised concerns about whether the happy situation will continue. Space systems specialist Joan Johnson-Freese says that since GPS technology grants enormous advantages to its provider - the US military - it is imperative that the US continue to invest in system upgrades rather than cede its superiority to other providers. - YaleGlobal

US will likely remain the main provider of technology that drives ATMs and guided missiles
Joan Johnson-Freese
Friday, May 23, 2003 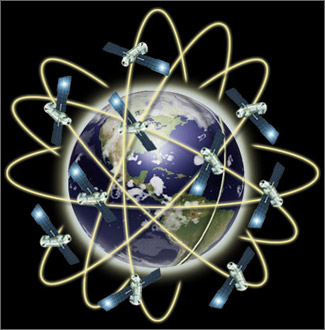 Beacons in the sky: 24 US military satellites help people navigate the world

NEWPORT, RHODE ISLAND: What do tourists trying to navigate through Boston using the NeverLost system on their rental car have in common with a mountain climber in Nepal trying to reach base camp, a soccer mom paying for gas with a credit card at the pump, and American bombers dropping precision-guided munitions on Iraq? All do - or soon will - rely on the Global Positioning System (GPS) for assistance. Owned and operated by the U.S. military, GPS is rare free lunch - a global utility available to the world at no cost. And despite emerging competition in the area, the US government's need to stay on top of this technology means that it will remain free to the world.

Effectively, GPS is a highly accurate time-transfer system. Each GPS satellite has four atomic clocks on-board, accurate to one nanosecond - and they will be even more accurate in the future. The basic technique for determining location utilizes radio data constantly transmitted from the GPS satellites to the receiver on the ground. If you know where the satellites are and how long it takes for four signals to get to a particular point, that point can be calculated and imposed on a latitude and longitude grid available to anyone with the technology to use it. The devices required can be purchased at electronics stores in the US for under $200 - or on the internet for even less. At any moment, at any point on Earth at least four satellites can be seen. A signal from one satellite is enough to determine the time accurately, but signals from four satellites are required to calculate time and positional information for navigation.

What does that all mean? It means that the location of a car equipped with GPS can be immediately identified by vectoring from four satellites so that directions can be provided to the driver's destination. It means that pagers, video feeds for cable and broadcast transmission, credit card authorization networks, and bank ATMs can be linked to communications satellites for transparent customer use through GPS-provided synchronized timing. GPS will help ease crowded transoceanic air routes by enabling aircraft to safely fly closer together. The accuracy of GPS positioning is what enables a dumb bomb, retrofitted with GPS equipment, to get smart. Just weeks ago, a GPS-linked military system allowed US field commanders in Iraq to identify the approach of friendly troops by blue (versus red) identifiers on a screen in their Humvees.

In 1995 the United States Air Force declared the Global Positioning System (GPS) fully operational. That system offers the world navigational capabilities which have become critical in both the civilian and military arenas. The importance of GPS is such that the U.S. must maintain system superiority, regardless of the cost.

It is unlikely that anyone who has the technology to read this article has not used GPS services on a regular basis. Indeed, GPS is often referred to as the first global utility. The cost of the GPS program through 2016 is estimated at $22 billion, paid for entirely by the United States. All of it. Consideration was once given to charging a small user fee, but that was discarded for a variety of reasons - primarily that the United States did not want to encourage competitive systems both out of American control and potentially interfering with the US system. Other countries are, however, now considering development of their own systems. Even the possibility of that occurring, which is by no means certain, makes it imperative that the United States do whatever is necessary to assure continued system superiority in the future.

But, a globally accessible, free system means that there is nothing to prevent other countries from using GPS as well - potentially for both civilian and military purposes. And they do. China, for example, has used GPS measurements to study tectonic strain rates associated with earthquakes. The Chinese military are also purportedly incorporating GPS technology into their "M" series short-range missiles.

Just how reliant we as individuals have become on GPS has already been demonstrated. In 1996, a timing error was mistakenly transmitted to one GPS satellite. The error was caught after only 6 seconds. Nevertheless, subsequent communication disruptions between satellites resulted in over 100 cell phone networks in the United States going down, some in excess of 24 hours. Clearly, if there were to be a major GPS failure, disruptions in fire, ambulance, and police operations could occur; the global financial and banking system could be crippled; electric power distribution would likely be disrupted; and air traffic control could be threatened. So would a second, back-up system be a good idea? The Europeans certainly think so. They worry considerably that the U.S. military could deliberately degrade GPS in times of hostilities to deny it to adversaries, potentially wreaking havoc globally.

Europeans not only fear the US capability to degrade or turn off GPS signals at will but have long resented the dependence created by the virtual US monopoly on the technology. Consequently, they have embarked on their own, "complementary" program, called Galileo.

Leadership disputes between Germany and Italy, and the United Kingdom and France, have repeatedly threatened to disrupt the project and are still not fully resolved. Ironically, the latest disputes have been generated because there is too much money available for the project - with the largest contributor entitled to host the project's industrial headquarters and to win about a quarter of the contracts. Indeed, even the meetings planned for April 2003 - meetings considered critical to get the program going - were cancelled. The 2008 operational date will have to be, at best, pushed back by two years.

The United States has watched this drama unfold with interest and considerable angst, as the potential for signal frequency overlap between the two systems and consequent disruption of the GPS system, including its military uses, is very real. Europe has considered placing one of the four services Galileo will provide, the restricted and encrypted Public Regulated Service (PRS) directly on top of, or "overlaying" the US encrypted military "M-Code" capability. Jamming one would subsequently jam the other. There are other options for the Europeans, but those options are not as potentially "robust" from a business perspective - a necessary consideration for Galileo's financial backers. Galileo, unlike GPS, is being developed complete with a business plan. Consideration is being given to private sector involvement, payment for special encrypted signals, taxation on receivers, and the market for receivers and equipment. The United States must be concerned that Galileo doesn't become the navigation equivalent of the VCR or DVD system and leave GPS as BetaMax. 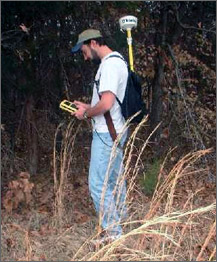 The Europeans aren't the only ones considering their own GPS system; China has expressed serious interest in Galileo participation. China has also launched two Bei Dou navigation satellites of their own, part of a planned four-satellite system. China, like the Europeans and Russia - with their own seriously deteriorated GLONASS navigation system - are very concerned about depending on the U.S. for what they consider a system critical to them economically and militarily.

Ironically, the GPS program came precariously close to cancellation in the 1980's, because no one was quite sure exactly what military mission it would be used for. Now, ideas as to what it can be used for have grown exponentially. Because it has become so valuable - from multiple military and civilian perspectives - the U.S. government now recognizes the importance of modernizing the technology, including a stronger "M- Code" signal to prevent jamming and commercial interference. Again, however, modernizations cost money. How much largely depends on the extent to which the Air Force emphasizes enhancement of current satellites, or moves on to new GPS III satellites, envisioned to have 100 to 500 times the anti-jam capability of current satellites.

If GPS is the first global utility, there will be more. Indeed many people already consider the Internet a global utility as well. The fact is, if the United States wants to maintain any semblance of control over the capabilities rendered by these global utilities, the price will be high. For GPS it will entail constant upkeep and technical modernization; for the internet it will be even harder since it is not primarily a hardware issue. Clearly, however, this is not a case of whether the US can afford it. To maintain its superiority, the US has no choice.