As profits surge, financial players eschew government intervention, but crave rescue as problems emerge. Public confidence in banks around the globe could make a cautious comeback, after the UK-led massive semi-nationalization of banks with "equity injection." This YaleGlobal series explores the global financial crisis, detailing how US troubles over mortgage-backed securities and the worst panic since the 1930s quickly spread overseas. As a result, the focus for banks and investors around the globe quickly shifted from high earnings to safety, and Europe backtracked from a united stance that the crisis is an American problem. In the third and final part of the series, financial analyst Scott B. MacDonald analyzes the attempt at coordinated rescue by Europe’s national governments: Nations that compete for trade and wealth can minimize pain by coordinating intervention. Economies on both sides of the Atlantic are inextricably linked, and public confidence on both sides can be restored by decisive leadership, with all governments acting together to recapitalize banks, ensure stability and emphasize the common good. As French president Nicolas Sarkozy announced today: “The time of everyone moving alone is over.” – YaleGlobal 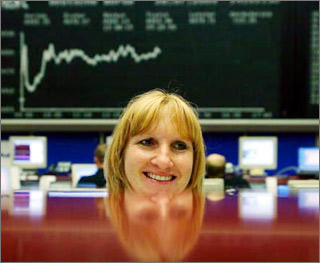 Will the smile last? Trader at Frankfurt Stock Exchange is relieved as the market rises, following UK-led intervention

STAMFORD: Lingering hope that by some ad hoc measures Europe could isolate its economies from the financial cyclone battering the US came crashing last week. Amidst indications that stability of top Western banks have sunk below many in the developing world, European leaders frantically worked to devise solutions to prevent economic collapse. Denial about the totally interconnected economic life of today’s globalized world is no longer possible, but new battle will begin about the shape of capitalism to emerge from the present ruin.

Alarm bells started ringing with the stunning collapse of the Icelandic banking system in early October, leaving the island nation of 320,000 with prospects for an economic contraction of around 10 percent and likely dependence on the International Monetary Fund for its survival until recovery starts. As central bankers and finance ministers scramble for solutions, Europeans are bewildered, worried and mistrustful. It’s obvious that failure to restore confidence will result in ongoing descent into a 1930s-like crisis, pulling along a train of severe macroeconomic and sociopolitical consequences. 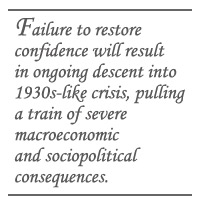 The stark reality facing many European banks and investment and pension funds is that they bought many of the same toxic financial products that sank US financial institutions. In other cases, European banks overextended in lending to local real estate markets and to Central and Eastern European markets. Consequently, slowing economic growth; tighter credit, as banks were quick to reduce lending; and extended evaporation of interbank lending, where banks lend to other banks, functioned much like a brake to a rapidly moving car. Interbank lending, in particular, became an acute problem, forcing the Bank of England, the European Central Bank and others to pump euros and pounds into the markets to guarantee some degree of liquidity.

Markets continued to be unstable, but unlike the rapid US acceptance of a $700 billion program to buy troubled assets from banks and implementation of the Federal Reserve program to purchase commercial paper, European governments remained adverse to a single policy response.

French President Nicolas Sarkozy briefly suggested the idea of a €300 billion, or US $460 billion, bank rescue fund. This was, however, rejected by German Chancellor Angela Merkel, leaving the European Union with a commitment to protect the financial system, but little else. As one commentator noted, the EU had “a common market with no common rescue plan.”

Lack of a broad, over-arching EU policy failed to calm investors or stop the crisis. In rapid succession, but in haphazard fashion, the largest Benelux financial conglomerate Fortis was rescued by joint Dutch, Luxembourg and Belgian intervention; the UK government intervened in the troubled building society Bradford & Bingley; the German government helped cobble a rescue loan for Hypo Real Estate. When these measures failed to stem the rising panic and the German government was forced to pull together yet another rescue deal for Hypo Real Estate, Fortis was sold to BNP de Paribas in Luxembourg and Belgium and nationalized in the Netherlands, and Dexia, the world’s largest lender to local governments. The dangerous risk of the financial crisis to the rest of the economy was evidenced by Dexia’s troubles. A failure by Dexia would have threatened €290 billion of commitments with local governments. The danger of local governments losing ability to finance development would be a problem in much of Europe, with a major impact on citizens’ daily life.

What’s evolved in the European Union is a rush by member states to create their own bank-rescue and depositor-protection plans. Along these lines, Ireland moved first to guarantee deposits in all personal bank accounts as well as backing debt of its banks. Other European countries followed out of fear of losing their bank deposits to Ireland’s safer program. In addition, Spain announced a €50 billion plan to buy assets from its banks, hoping to nudge open credit markets.

In the UK, growing concerns over losses at such large institutions as the Royal Bank of Scotland, Halifax Bank of Scotland, Barclays and others saw the government resort to a partial nationalization of some of the country’s largest financial institutions. The Brown government implemented a program with as much as £50 billion, or $97.2 billion, to buy preferred shares in banks to boost capital. In addition, the government raised the level the Bank of England makes available for banks to borrow to at least £200 billion. France and Italy also created bank-protection programs, and Germany soon joined in with €400 billion in loan guarantees, providing as much as €80 billion to recap banks, and setting aside €20 billion in its budget to cover potential losses from loans. 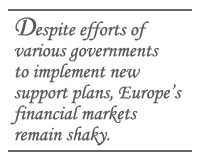 Despite the plethora of European government programs, investor confidence may remain elusive for two reasons – the large costs of financial bailouts and concern over the possibility that one of Europe’s large transnational banks fails. The International Monetary Fund estimates that total losses and write-downs from the credit crisis will amount to $945 billion, and there are higher estimates in excess of $1 trillion. Thus far, according to Bloomberg calculations, total losses are $633 billion, with $383 billion in the Americas, mainly the United States; $225 billion in Europe; and around $25 billion in Asia. Chances are that the European losses will grow, possibly approaching the same level as the Americas.

The major priority is to restore confidence, and this comes from creating a more uniform G7 plan. In a practical sense this means defining which banks are too big to fail, creating cross-border safety nets for those that might be too big to save, partially nationalizing the banks where necessary and pumping capital directly into the interbank market to guarantee transactions between banks currently reluctant to lend to one another. This also means overcoming ideological stickiness over state intervention, fear of bailing out others or need to cast blame.

Over the weekend of October 11-12th, EU leaders made another effort to stabilize markets, with three measures, which could be fine-tuned: Member states will guarantee new bank debt until the end of 2009; governments will shore up banks by buying preferred shares; and they announced a commitment to recapitalize any “systemically” critical banks in distress. There’s also an indication that measures would be further coordinated within the G7. 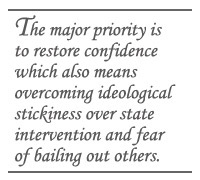 The current financial crisis is the most serious since the 1930s. Although many Europeans blame the US for the financial panic due to its almost blind faith in unfettered free markets, models and derivatives, globalization has left them very interconnected to US markets. While the financial philosophy guiding the US and UK is very similar, continental Europe holds a view that this is a chance to reshape the financial sector for the "public good." This philosophy very much ties into the main battle over the commanding heights of the global economy that’s sure to begin as markets stabilize.

Whatever model emerges as the winner, there can be no divorce between the US and Europe in this regard. The stakes are exceedingly high and further steps are required to restore confidence.

Scott B. MacDonald is a senior partner and head of research at Aladdin Capital Management, LLC, in Stamford, Connecticut, and currently writing a book on Asia and globalization.