Capitalism is not the only '-ism' flourishing in China today. Since the early 1990s, the country's battles against dust storms, deforestation, watershed pollution, and other problems have attracted the attention of both domestic groups and foreign environmental organizations. The government in Beijing signaled its official commitment to sustainable development after the 1992 Rio Earth Summit. Since then, says China scholar Guobin Yang, an array of bilateral aid agencies, development banks, and international non-governmental organizations has bolstered homegrown Chinese activism. The ever-widening diffusion of the internet has also granted Chinese environmentalists a vibrant, if politically precarious, space to come together to discuss grievances and debate solutions. Yet even with the influence of foreign organizations in cyberspace and on the ground, Yang argues, Chinese activists have agendas and concerns that are particular to the Chinese context. If they are to succeed in addressing China's urgent environmental problems, Yang says, they must find the right balance of global input and local leadership. - YaleGlobal 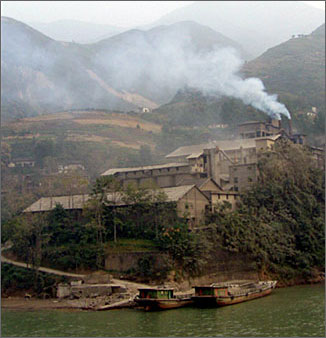 As a factory on the banks of the Yangtze River spews pollution, the need for civil society intervention is rising. (Photo: Nayan Chanda)

WASHINGTON: If one of these days you find yourself in a fast food restaurant in Beijing, you might witness the following: A professional-looking woman sails into the restaurant, makes her order, and fishes out a pair of chopsticks from her purse, with which she begins to eat. Guess why she doesn't touch the disposable chopsticks on the table? Well, she is an environmentalist committed to saving trees.

Environmentalism is one of many "isms" - consumerism, materialism, nationalism, and capitalism - that hit China in the 1990s. Its linchpin notion is the globalized language of sustainable development. The birth of environmentalism thus signals the arrival of global environmentalism in China. Despite its short history, it is already exerting influences on Chinese politics and society. 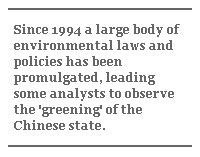 First, environmentalism has found expression in various cultural forms. The Beijing-based Environmental Literature Research Society, for example, has published several series of literary works on environmental themes. The series involve some of the best-known writers in China today. Environmental reporting in the newspapers is also on the rise. One survey shows that while on average Chinese newspapers carried only 125 articles on environmental issues in 1994, the number had grown to 630 by 1999. Television and radio programs about the environment have become common features. With the diffusion of the Internet, environmental websites have mushroomed. As a result of this cultural effervescence, a "greenspeak" has entered the Chinese vocabulary. Biodiversity, GM foodstuffs, green consumption, and animal rights have all become hot public topics. (See "Global Anti-GM Sentiment Slows China's Biotech Agenda").

Environmentalism has also found an organizational base in China. Over the past decade, about 100 environmental non-governmental organizations (NGOs) have cropped up, not including the thousands of government-organized NGOs, so called because they are sponsored by government agencies. Additionally, about 200 student environmental associations - fledgling NGOs - are active on college campuses.

These organizations are spearheading a quiet grassroots environmental movement engaged in consciousness-raising, problem-solving, and even advocacy. For example, the Beijing-based Friends of Nature goes to rural schools to teach children about environmental protection. The Center for Legal Aid to Pollution Victims, also in Beijing, has provided legal assistance to pollution victims since its establishment in 1998. Its telephone hotline has received thousands of calls about environmental legal issues. The Green Volunteer League in Chongqing city, Sichuan province, publicizes the ecological problems related to the Three Gorges Dam project. Several organizations have launched large-scale campaigns to protect wetlands and endangered species. Others have exposed business enterprises that violated environmental laws.

How to account for the growth of environmentalism in China? Timing is crucial, and this is where the globalization story comes in. In the 1990s, a host of domestic and international events integrated China further into the world community, widening domestic political spaces and boosting environmentalism.

First, with Deng Xiaoping's "Southern tour" in 1992, during which he sang the virtues of economic reform, China accelerated its integration into the world market system. Then, following the 1992 Rio Earth Summit, the Chinese government published its strategies for sustainable development in a "China Agenda 21" white paper issued in March 1994. A large body of environmental laws and policies has since been promulgated, leading some analysts to observe the "greening" of the Chinese state.

In the 1990s, multilateral banks, bilateral aid agencies, and international NGOs poured into China, bringing funding, projects, expertise, and legitimacy to Chinese NGOs. In 1995, the UN World Conference on Women smuggled international NGO culture into China through the back door. The NGO Forum on Women before the UN Conference, although relegated by the Chinese government to the inconvenience of a suburban town outside Beijing, nonetheless brought the vigor of international NGOs to public view in China and gave Chinese participants direct exposure and networking experience.

A growing awareness of China's grave environmental problems - like dust storms, greenhouse gas emissions, pollution of trans-border watersheds, and deforestation - has increased China's connections to the world. Many international environmental NGOs, such as WWF, Ecologia, Pacific Environment, and Friends of Earth, have set up projects or opened offices in China. Even the radical Greenpeace now has an office in Beijing. As recently as November 2003, its executive director, Gerd Leipold, even gave a public lecture at Beijing University.

The 1990s also saw the dramatic growth of an Internet population and culture, with the number of Internet users rising to 80 million in December 2003. Of the numerous citizen groups, China's environmentalists were among the first to embrace the Internet to advance their cause. In a draconian political system, cyberspace offers relatively free spaces for such civil society activities. Some environmental groups depend on the Internet for existence, with organizational identities closely tied to their websites.

Although China's political system generally does not welcome input through unofficial channels, two important public trends have emerged that reveal people's concerns about the environment. One is the growing range and intensity of public debates on environmental issues. These could range anywhere from environmental rights and animal rights to the ethical lapses of extravagant lifestyles. The other trend is the rise of NGO-led citizen action, such as environmental monitoring, community recycling campaigns, and educational projects in rural schools.

Public debates and citizen action contribute to environmental consciousness-raising as well as tackling concrete problems. They have political consequences too, for their development both reflects and boosts the growth of civil society. Furthermore, NGOs may serve as laboratories of democratic participation. Tang Xiyang, founder of Green Camp, an annual summer camp for college students, hopes to provide training in democratic practices to China's younger generation. As he puts it, "without real democratic life, there will not be everlasting green rivers or mountains." Inaugurated in 1996, Green Camp has graduated enough young environmentalists to be jokingly dubbed the "West Point of China's environmental movement."

For all its global inspiration, environmentalism in China is not a just a copycat movement. For Chinese environmentalists, one local aspiration is to ground the global discourse of sustainable development in eastern philosophical traditions such as Buddhism and Daoism. These traditions stress the harmony between humans and nature, reject human-centered approaches to the environment, and admonish humility before nature. These ideas bring global ecological thinking closer home.

Guobin Yang (yangguo@wwic.si.edu) is a Fellow at the Woodrow Wilson International Center for Scholars and an assistant professor of sociology at the University of Hawaii-Manoa. He is the author of several articles on the role of the Internet in civil society development in China.