Intensive agriculture, pesticides, pollution, deforestation, habitat loss, invasive species and a changing climate are decimating populations of bees, ants and beetles, reports research published in Biological Conservation. Meanwhile the populations of houseflies and cockroaches, insects that reproduce quickly and live among humans, could rise. “Insects make up the majority of creatures that live on land, and provide key benefits to many other species, including humans,” reports Matt McGrath for BBC News. “They provide food for birds, bats and small mammals; they pollinate around 75% of the crops in the world; they replenish soils and keep pest numbers in check.” One third of all insects are now classified as endangered, and it’s estimated 40 percent of insect species could go extinct. Insects are part of the food chain, and their decline threatens other species including birds, reptiles and fish. The study’s authors, FranciscoSánchez-Bayo and Kris A.G.Wyckhuys, urge serious reduction in pesticide use and agriculture practices that priortize environmental protections. – YaleGlobal

A scientific review of insect numbers suggests that 40 percent of species are undergoing dramatic rates of decline around the world
Matt McGrath
Wednesday, February 13, 2019 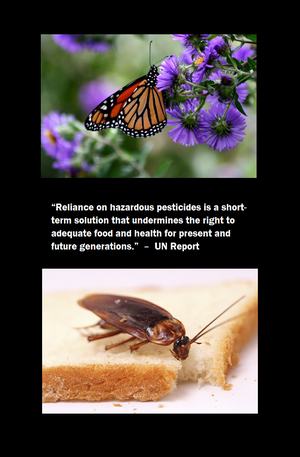 Read the article from BBC News about scientific research that reports a decline in populations of larval insects land and some aquatic insects.

Matt McGrath is the environment correspondent for BBC News.

Read the study “Worldwide Decline of the Entomofauna: A Review of Its Drivers” from Biological Conservation.

Read the UN Report of the Special Rapporteur on the Right to Food, which addresses the dangers of pesticides: “Pesticides cause an array of harms. Runoff from treated crops frequently pollute the surrounding ecosystem and beyond, with unpredictable ecological consequences. Furthermore, reductions in pest populations upset the complex balance between predator and prey species in the food chain, thereby destabilizing the ecosystem. Pesticides can also decrease biodiversity of soils ….  While scientific research confirms the adverse effects of pesticides, proving a definitive link between exposure and human diseases or conditions, or harm to the ecosystem presents a considerable challenge. This challenge has been exacerbated by a systematic denial, fuelled by the pesticide and agroindustry, of the magnitude of the  damage inflicted by these chemicals.”

Insecticide! (An Ecological Disaster That Will Affect Us All)