The upcoming meeting of the Group of Eight must help resolve the contentious trade disputes that threaten to ruin the free trade regime, says Ernesto Zedillo, Director of the Yale Center for the Study of Globalization and former President of Mexico. Without intervention by the leaders of the developed world at their June gathering in France, the Doha Round of WTO negotiations will continue to be mired in disagreement, he writes. Talks on three issues - intellectual property rights and pharmaceuticals, agricultural subsidies, and special protections for developing countries - are on the brink of collapse, but they could still be resuscitated by sincere negotiation and substantial compromise, particularly on the part of France and the US. If the Chirac and Bush governments don't make the effort, Zedillo concludes, the current trade conflicts could lead to a massive failure of the multilateral trading system on which global prosperity is based. - YaleGlobal

G-8 leaders must work to prevent the collapse of the WTO's Doha Round
Ernesto Zedillo
Tuesday, May 27, 2003 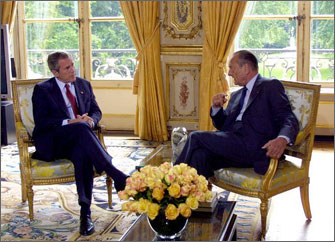 President Bush and President Chirac in happier times in 2002: Now they both need to embrace multi-lateralism to save the world order. (Photo: White House photo by Paul Morse)

NEW HAVEN: The new American doctrine of pre-emption has resulted in two regime changes for the price of one: the first in Iraq, the second in the international order itself. We don't yet have a new international system, but we're witnessing an international disorder. The summit meeting of the leaders of the Group of Eight developed nations in June - the first since the Iraq war - will offer them an opportunity to urgently address the task of halting the slide into further disorder.

During the Cold War, the US response to the Soviet Union was to build an international order with two pillars. One pillar - security - was based on military deterrence and containment, ideas which were successful in preventing a catastrophic conflict. The other pillar - prosperity - was based on multilateral institutions, democracy, and open trade. It was supported by a multilateral system of cooperation and rule-based political and economic institutions that had the United Nations as its centerpiece. In the past two years, that second pillar has also become shaky. The multilateral trading system, in particular, is in danger of becoming the battleground for unsettled geopolitical disputes, with disastrous consequences.

The Doha process was heralded with great fanfare as 'the development round'. This was supposed to mean that at last negotiators would seriously address the issues of greatest interest to developing countries. Chief among these were the need to resolve the implementation issues of the Uruguay round, including the question of trade-related aspects of intellectual property rights (TRIPS) and access to essential medicines, the liberalization of agricultural trade, and the removal of remaining barriers in non-agricultural products. Unfortunately, unless urgent steps are taken, talks on all three issues are now in danger of collapsing.

At the WTO Doha meeting in November 2001, all members reaffirmed the right to grant compulsory licenses to generic manufacturers. This helped to clarify the situation of developing countries that have the capacity to manufacture pharmaceuticals, such as Brazil and India. But it left out the poorest countries that lack pharmaceutical industries, such as sub-Saharan African nations. The special Doha Declaration on TRIPS committed WTO members to find a solution for these countries before the end of 2002.

The deadline was missed. A compromise carefully crafted over several months was, in the end, rejected by the United States. And since then, attempts to resolve the gridlock have failed. I suspect that the cost - an erosion of US leadership by poisoning the Doha process - will be far higher than any possible benefit to the US. Even worse, it is undercutting the diplomatic and humanitarian value of President Bush's proposal to provide an additional $2 billion a year to fight HIV/AIDS in Africa, a significant example of international cooperation.

On the issue of agricultural protectionism, too, the deadline for reaching a settlement was missed. High subsidies in rich countries have hampered agricultural growth in the developing world (where almost 60 percent of the population lives in rural areas) and have aggravated their poverty problems. Members of the WTO agreed to commit to a framework for agriculture negotiations by last March 31. That framework would have involved the adoption of specific targets for achieving the mandate of the negotiations.

The first bold move to lower agricultural subsidies was made by the United States. In July of 2002, amid acrimony over its farm bill, the US put forward an ambitious proposal for liberalizing agricultural trade. The proposal was opposed from the very beginning by their European counterparts, who saw it as aggressively antagonistic to their Common Agricultural Policy.

The bottom line is that the agricultural negotiations became highly polarized. Striking a deal from the two extreme positions presented by the US and the EU is practically impossible. Stuart Harbinson, the chairman of the WTO Committee on Agriculture, made a compromise proposal which sought a good balance among the different positions. Yet nobody wanted to give in. The Harbinson draft was rejected and the March 31st deadline abandoned.

Equally dire are the talks on the third issue: special and differential (S&D) provisions, which are supposed to give developing countries special rights and enable developed countries to treat them preferentially to other WTO members. It was agreed at Doha that S&D provisions would be reviewed to make them stronger as well as more precise, effective, and operational. Yet the third deadline for these negotiations was missed last February 10th, and there is now little or no hope for any significant progress before the next ministerial meeting.

The deadlock in the Doha Round must be broken, not only because its goals are important by themselves (especially in light of the Round's purported development emphasis), but also because failure to move forward now will throw more gasoline on the already fierce fire of trade disputes and flagrant abuse of trade safeguards by both developed and developing countries. But saving the Doha Round will take much more than the hard work of negotiators and ambassadors to the WTO in Geneva. For better or worse, the matter must go the highest political levels. National leaders will have a moment of opportunity to repair the present international disorder at the G-8 summit at Evian in early June.

It is an almost cruel circumstance that the burden to overcome the Doha gridlock lies chiefly with both the United States and France, given the importance and complexity of the agricultural issue. President Chirac can show that his commitment towards multilateralism is unquestionably sincere by abandoning his opposition to Europe's agricultural reform. Similarly, a meaningful step toward restoring "the good kind" of American international leadership would be for Washington to become more open to compromise on the key Doha issues.

The neo-protectionist spiral must be checked immediately. Any later might be too late.

Ernesto Zedillo is the director of the Yale Center for the Study of Globalization and former President of Mexico.