Global Risk of US Credit Crisis – Part I

Uncertainty swirling in the US financial markets and the Federal Reserve's rate cut leave world players, along with US homeowners and investors, in a quandary. In the first part of this series, economist David Dapice analyzes the global implications as the uncertainty and lack of confidence associated with the credit crunch spread beyond US borders, hurting banks in Europe and investors in Asia. Prospects for recession could mean a weakened demand in the US, hurting the bottom line for Chinese exporters that supply US stores. With rising oil prices on the horizon, problems once assumed to be under control by economists and wealthy nations, could emerge to roil world markets. Dapice advises all global players to examine their investments and customer base – and to diversify. – YaleGlobal

Global Risk of US Credit Crisis – Part I

The US responds too little, too late, to the credit crisis
David Dapice
Friday, September 21, 2007 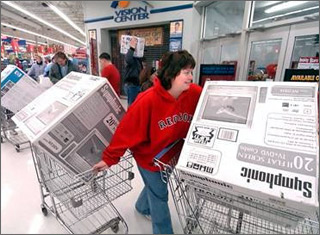 Carrying debt: The US interest-rate cut may spur spending now, debt burden will come back to haunt in the long run

MEDFORD: The US Federal Reserve cut the “Fed funds rate” from 5.25 percent to 4.75 percent on Tuesday, ending a long period of stability. Stagnation and inflation, once thought banished from the US because of high productivity growth and globalization, could re-emerge, and that could have implications for the global economy.

Under scrutiny is the rate at which US banks borrow from one another in the short term. From late 2002 to mid-2004, the rate had been held down to 1 to1.5 percent, but then Alan Greenspan, the former chairman of the Federal Reserve Board, began a series of steps upward, ending in early 2006. Ben Bernanke took over as chairman, and his tenure has been marked by inaction until now. The rate cut takes place against a background of core inflation still above 2 percent and slowing productivity growth, but also during a period with soft job data and a housing and credit crisis, the dimensions of which are still being plumbed. 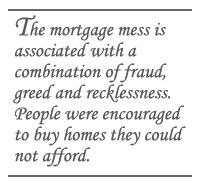 The mortgage mess is associated with a combination of fraud, greed and recklessness. People were allowed and even encouraged to buy homes they could not afford, and advised they could refinance later. This group included not only the well-publicized sub-prime group, but also the much larger group of “Alt A” mortgages that did not require documentation of declared incomes.

The assumption among lenders and perhaps government regulators was that rising real-estate prices would bail out strapped borrowers, allowing them to refinance or sell homes later; with little or no down payment, the worst that might happen is homeowners would give up houses and start renting again. Other buyers were “flippers,” trying to speculate on rising home prices.

In any event, when housing prices began to fall and as credit conditions tightened, many of these risky loans went bad. It is unclear yet how many will result in foreclosures and forced sales, for government agencies scramble, seeking ways to keep many of the buyers in their homes. There’s an overlapping group of about 2 million homeowners with adjustable mortgages, many of whom had low initial “teaser” rates. These people will face higher payments no matter what the Fed funds rate is, unless they get a targeted subsidy. Obviously, more forced sales would depress overall housing prices and decrease wealth and consumption for most households, and not only those directly affected. For exporters, especially developing countries like China that stock shelves of American stores, reduced spending by cash-strapped consumers would be very bad news. 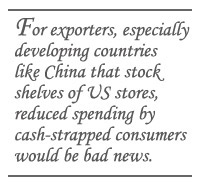 These problems spill over into other credit markets, the ripples of which have reached foreign shores. As Wall Street bought pools of mortgages and created exotic derivatives with different amounts of risk, the pricing of these products depended on complicated models good only as their built-in assumptions. As prices on homes fell in late summer and more borrowers defaulted than expected, many of these securities were found to be much more risky than expected or than rated. This created general concern that any short-term corporate paper, or commercial paper, might also be risky, and a multitrillion-dollar market froze up. It’s beginning to return to normal, but hundreds of billions of private-equity takeovers, a pillar of support for the US stock market, are now in question. Foreign banks that bought these derivatives are in difficulty, and the fallout from these credit uncertainties and losses have dented financial stocks as well as bank lending in Europe.

It’s not clear how much the rate cut by the Fed will help, though the short-term response of the stock market suggests investors are optimistic. If inflationary pressures reappear, the rate cut could impose more costs than benefits. The dollar is already at an all-time low against the euro and could fall even lower against this and other major currencies. This would raise import prices and tend to push up long-term interest rates. (The Fed funds rate is for overnight or very short-term loans.) If the dollar were perceived as a weak currency, overseas investors would demand higher returns from longer-term dollar-denominated assets, so that their return in euros or yen would be as healthy as investments in assets based in their currencies. Since the US is a net international debtor and borrows about $700 billion a year, higher interest rates are a burden.

Economists are not very good at predicting recessions, but most put the chance of one in the next year or so at greater than 25 percent and less than 50 percent. The mainstream view is that growth will slow and unemployment may well rise, but output will continue to grow. A major concern is that lower import quantities at higher prices would combine with lower housing prices to reduce real consumption and imports. One US official estimates that housing prices could fall by 20 percent, which could reduce consumption by 2 percent. This decline in the value of housing, leading to reduction in both consumer and business confidence, would then depress global trade and economic activity.

One possible complicating issue is that home prices have risen even more sharply in many European countries than in the US, even when adjusting for housing supply, incomes and interest rates. If general global weakness causes economies in the UK, continental Europe, Australia and elsewhere to slow down, housing price declines in those places might cause problems akin to those in the US, though without the sub-prime mortgage whammy. Economies tend to slow down or even shrink when housing prices fall due to the direct impact of lower investment and consumption, as well as the indirect impact of less wealth and lower confidence. If these problems spill over into stock and bond markets, the results are more severe. Again, lower interest rates can soften, but not fully reverse such problems. 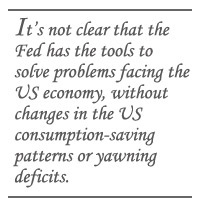 The world economy is fairly robust just now, though Japan may be in recession. Record high oil prices hurt an energy-hungry US economy, and high household debt with low savings make the US more vulnerable to any shocks. Slow US wage and employment growth would tend to remove one of the pillars of recent demand, the resilient US consumer. If real personal consumption does start to decline, then a recession is much more likely. While the stock market signals confidence, the bond market has not – rates have been inverted, with short rates higher than long rates, and long-term rates only 4.5 to 4.7 percent, below the level of earlier this year and quite low in real terms.

It’s hard to say whether stock-market confidence or bond-market pessimism is justified, but a prudent bet would be that growth will slow down a lot unless oil prices come down. In the meantime, the Fed will try to stimulate the economy by cutting rates, but also keep an eye on inflation and the weak dollar. It’s not clear that they have the tools to solve the problems facing the US economy, without fundamental changes in the US consumption and saving patterns or yawning budget and trade deficits. Meanwhile that part of the world that counts on growth by exporting to the US would be prudent to scale back their expectations and diversify.