The globalization of finance has made vast amounts of capital available to many across the world, allowing select leading firms and individuals to become fabulously wealthy. But a lack of effective regulation and opaqueness of many financial instruments also exposed many firms and individuals to enormous risk. Globally connected financial markets and high-speed technology mean that one nation’s financial crisis can affect the entire world very fast. The recent turmoil in the world financial market caused by the US sub-prime lending crisis has come as the newest example of such danger. Journalist David Crane suggests that the US export of complicated financial instruments, with their hidden risks, rivals Chinese exports of toys with lead paint, and that both could benefit from global oversight. Crane offers some specific recommendations for regulating international finance that could restore global trust. – YaleGlobal 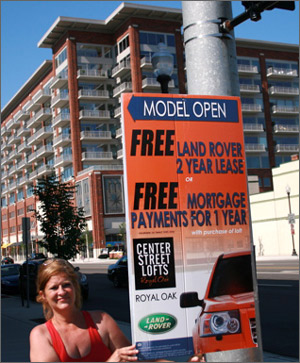 PARIS: Americans, quite rightly, are concerned about the safety of products they import from China. This is why they have insisted that the Chinese adopt stronger standards for toys, for example, and even let Americans conduct factory inspections there. Emerging as a new issue is whether similar supervision should be applied to other international transactions in order to ensure the safety of the financial world.

As we see with continuing turmoil in world financial markets, a leading US export – complex financial products – has also produced a threat for the world economy. And other nations now demand that the United States adopt improved regulatory oversight for those financial-product exports. China is already moving to improve regulatory oversight to assure the safety of its exports. Now, the US must take its turn to upgrade quality assurance and transparency of US financial products. 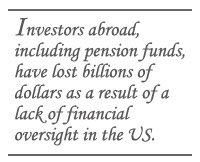 Investors abroad, including pension funds, have lost billions of dollars, a result of a lack of financial oversight in the US. At the same time, foreign central banks have been forced to inject billions of dollars into their banking systems to offset a dangerous credit squeeze and even prevent bank failures.

The US Federal Reserve lowered interest rates in a bid to ease the credit crunch and prevent a recession. Countries around the world have lowered economic-growth prospects. And individual consumers and small businesses face both greater difficulty in obtaining credit and higher credit costs. Poor countries will also face higher borrowing costs.

The turmoil in financial markets is due in large measure to the hands-off approach of US regulators toward the introduction in recent years of new and increasingly complex financial products that are far from transparent. They also ignored a deterioration in credit standards for too many borrowers.

American mortgage institutions, many of them unlicensed and operating with questionable business practices, arranged mortgages for some 2 million or more families with poor credit histories, enabling them to buy their own homes and enticing them with low “teaser” rates that made credit seem extraordinarily cheap and easily affordable.

These mortgages were then combined into large packages by banks, in a process known as securitization, repackaged in a process known as “slice and dice,” with some resold several times over, until they ended up in the portfolios of pension funds, insurance companies and other investors around the world. Rating agencies provided assurance by giving generally favorable ratings to these investments, but the originators of these financial products were the paymasters of the rating agencies. This meant that those making high-risk loans passed the risk of default on to others, with the “others” often unaware of the risks they had taken on.

A growing number of families that committed to sub-prime mortgages are defaulting as the “teaser” rates expire, replaced by much higher interest rates. Investors in the securitized packages of sub-prime mortgages have no idea of what they’re actually worth.

Fears over these securities have fueled a contagion effect, with investors now shy of a wide range of securitized products. The effect has been to freeze the market for many of these products, and so as they come up for renewal, there are no purchasers. To protect themselves, banks have been hoarding cash. The end result is a liquidity squeeze and a credit crunch for normal borrowers. Europe has been especially hard hit.

Britain has also taken up promoting many of these same financial products, and like the US, also resisted transparency and regulation, with the two countries representing what might be called laissez-faire Anglo-Saxon capitalism. Not surprisingly, France and Germany have led much of the criticism of this kind of capitalism. At this year’s G-8 summit, for example, German Chancellor Angela Merkel tried to get a consensus on a code of conduct for hedge funds, but was strongly rebuffed by the US and the UK.

Now a number of countries insist on better regulation and improved transparency for many of these financial products. Financial globalization needs global oversight since regulatory mismanagement in one major country quickly spills over into the rest of the world, putting economic growth and millions of jobs at risk. And other countries have leverage over the US because its economy cannot function without access to large amounts of foreign savings to cover its ongoing current account and budgetary deficits. 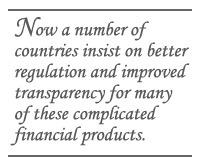 French President Nicolas Sarkozy has instructed his finance minister, Christine Lagarde, to draft a plan to compel financial institutions to disclose more information about the financial products they sell. “There is a growing case for better state involvement on a coordinated basis in various areas, one of which is stock markets and financial markets,” she has said. Lagarde, with support from Germany, plans to present her ideas to G-7 finance ministers in October.

The good news is that the US seems to take these concerns seriously. Secretary of the Treasury Hank Paulson recently visited Sarkozy and Lagarde in Paris to show his support for greater transparency in financial markets.

There are a number of possibilities, including improved reporting by hedge funds and other complex financial products, now largely exempt from effective oversight. While securitization does make markets more efficient by spreading risk, there is a need for better information on what’s inside the debt packages being sold to investors.

The role of the US Federal Reserve in dealing with speculative bubbles must be re-assessed. There are concerns the Fed was too lax in monetary policy in recent years, which encouraged speculative activity, and too slow in addressing problems in the sub-prime market and the proliferation of complex financial products. There’s a need for internal soul-searching at the Fed.

A greater role for the International Monetary Fund, the Bank for International Settlements or the Organization of Securities Commissions is also possible. Barry Eichengreen, US expert on financial markets, argues that the risks to the financial system justify global regulation. “We need to push [these organizations] to act more aggressively and more forcefully, and put a little less faith in the ability of markets to solve their own problems,” the International Herald Tribune reported him as saying.

In many ways the global economy has become finance driven. Such an economy enables small groups of people to become immensely wealthy from financial globalization. According to a new report from the Institute for Policy Studies, the top 20 private equity and hedge-fund managers in 2006 earned an average of US $675.6 million in 2006, or US $12.6 million a week.

But as financial executives make enormous wealth, millions of others pay through lost jobs and slower economic growth. The globalization of financial markets can only work if there’s adequate oversight to ensure that risk is transparent and understood. That is lacking today. But just as the Chinese are trying to clean up what they export, it is time for the US to reassure the world that it’s serious about taking responsibility for what it exports as well.

David Crane is an award-winning Canadian journalist whose Global Issues column appears in the Toronto Star on Mondays. He can be reached at crane@interlog.com