With the advent of the global war on terror, local first-responders in many parts of the world have been charged by national governments with countering and mitigating the effects of terror attacks. Globalization scholar S.L. Bachman, however, argues that tragedies like the September 11 attacks on the US and the 2002 Bali bombings in Indonesia show that local police, firefighters, and medical personnel are often little prepared to take on these roles. Poor funding, inadequate technology, and insufficient coordination between local and national-level authorities are substantial barriers to effective responses to terrorist attacks. In the war on terror, she writes, getting first-responders up to speed is a task even more important than training a national military. "Preparing to meet global threats locally," Bachman argues, "means balancing unpredictable global threats against known, immediate needs." But for first-responders in many cities, whether the funding and political will necessary to meet those immediate needs will be forthcoming is still an open question. – YaleGlobal 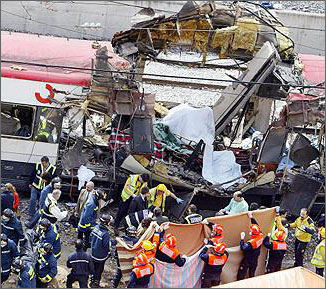 SAN FRANCISCO: Among the heroes of the terrorist attacks of September 11, 2001, the New York City firefighters stand out. They trooped into the burning World Trade Center towers despite slim odds of saving the people inside, or coming out alive. But, as three years worth of hearings and investigations have made clear, their task was even more quixotic than they realized. From New York to Istanbul, the police, firefighters, and medical personnel that make up a city's first-responders may be dedicated to their duties, but most are poorly equipped to handle the extreme emergencies brought on by global terrorism.

As a US investigative commission confirmed on July 22, gross failures of “imagination” kept national officials from adequately preparing for a catastrophic Al Qaeda attack, despite Al Qaeda’s 1993 truck-bombing of the World Trade Center. The firefighters' emergency radios operated poorly or not at all inside the twin towers. First-responders failed to "achieve unified incident command," according to the final report of the '9-11 Commission' – the independent, bipartisan commission that examined America's civil preparedness for the 2001 terrorist attacks.

Many who died that day perished because the United States had prepared to fight states, not a loosely organized, internationally dispersed coalition of terrorists. 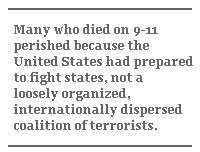 Nations around the world face the same paradox: As global terrorist groups target population centers, local first-responders are at least as important as standing armies – and at times more important. But first-responders – firefighters, police, emergency medical technicians, transportation workers, and others – are largely commanded, trained, and equipped to respond to local emergencies.

Those who are first on the scene at emergencies now must not only stanch bleeding wounds, put out fires, or arrest trouble-makers. They also must consider: Is this emergency the first event in a series of global terrorist attacks? Is this illness the result of a chemical or bio-terror attack? Are these ill patients the first sign of an epidemic that could spread via international travel around the world, causing untold thousands of deaths and billions of dollars of economic losses?

Since 2001, cities from New York to New Delhi, Istanbul to Kabul have upgraded first-responders' equipment, training and command. But there is a long, long way to go. Helping local first-responders to meet a global threat is in many ways more difficult than equipping, training, and commanding national military forces. The local puzzle contains many more pieces: more political officials, city bureaucracies and political micro-climates; local sources of revenue or lack thereof; and the ability and willingness to do the job among people who have never prepared for it.

Consider rich countries, such as the United States. 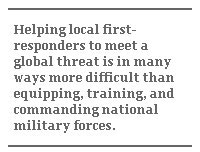 New York firefighters have new emergency radios that will function inside skyscrapers during emergencies. "Homeland" defenses have been consolidated, and millions of dollars appropriated. "We have dramatically improved our capacity to prevent, and if necessary, respond to a terrorist attack," said President George W. Bush on the day the 9-11 Commission's report was released.

But in many ways New York and the rest of the country remain unprepared. Numerous "soft targets" remain unprotected, according to Stephen Flynn, a retired U.S. Coast Guard commander now at the Council on Foreign Relations.

Big cities and states are fuming that, for political and bureaucratic reasons, states and territories with small, scattered populations are budgeted for many times more money per capita than New York, California and other more populous states.

Human and mechanical errors are rampant. In June, a series of human and computer errors almost caused officials to shoot down a Kentucky State Police plane, carrying the states' governor, as it approached the airport closest to Washington, D.C.'s urban core. The airport has been all but closed to general aviation (small planes) since 2001, when a hijacked plane crashed into the nearby Pentagon, which houses the Defense Department.

Ideological and political blunders complicate readiness and responsiveness. In Spain, anti-terrorism measures failed to head off 10 explosions that rocked Madrid's commuter rail lines during a single day in May, killing nearly 190. (The police did find and defuse three more bombs.) National political leaders initially blamed Basque terrorists, a target of the sitting government's reelection statements. The failure to quickly identify the bombs as the work of Islamic terrorists spurred Spanish voters to oust the pro-U.S. government and replace it with one that vowed to remove Spanish troops from Iraq.

The Madrid bombs spurred a rethinking of the European Union anti-terrorism policy adopted in 2001. "The key challenge is to establish a way of reinforcing existing collaboration in intelligence-sharing and police investigations without creating new bureaucracy that would be too cumbersome," write Magnus Ranstorp and Jeffrey Cozzens of the St. Andrews' Center for the Study of Terrorism and Political Violence.

That is a huge task, even for a group of wealthy, technologically advanced countries. But for the developing world, the challenges are even bigger.

In Indonesia – where bombs in Bali and Jakarta in 2002 and 2003 killed 214 – the Transnational Crime Co-ordination Centre (TNCC) opened in Jakarta in July. The center will allow police to access data on up-to-date computers. But many of Indonesia's police stations, like police stations in many other developing countries, still lack telephones and computers.

And in Istanbul, Turkey, four truck bombs blew up two synagogues, the British Consulate, and a British-based bank, taking more than 60 lives, in November 2003. Scores of suspects have been rounded up since. Even so, seven months later, and four days before a NATO summit, a bomb destroyed a bus, killing four. (Another bomb exploded in Ankara on the same day, and another bomb damaged an airplane at Istanbul airport during the summit.)

To meet local terrorism-preparedness needs, at least two central questions must be addressed:

First, how will local officials coordinate with national, and international, anti-terrorism efforts?

Coordination among national and local officials is no mean feat in the best of times. The shadowy and unpredictable threat posed by global terrorism increases the challenge many-fold. Jurisdictional and technical issues complicate matters.

It is painfully clear, however, that coordinating national-level action with local first-responders is crucial. In 2002, Chechen terrorists seized a Moscow theater, taking more than 700 audience members hostage. A military anti-terrorism unit stormed the theater, quelling the occupants with an anesthetic gas. But the military failed to immediately identify the gas to local medical personnel, and 129 former hostages died for want of immediate, or appropriate, medical help.

The second key question for first-responders is: Who will pay?

The deaths of almost one hundred Australians in the Bali nightclub bombing, combined with concerns over the spread of terrorists into Australian cities, prompted the Australian government to help pay for the new anti-terrorism center in Jakarta. But where will other cities get money to train, equip, and command first-responders?

In the US, the question remains unanswered. "Unless the Bush Administration takes responsibility for the cost of providing national security in our cities," warns Los Angeles City Councilman Jack Weiss in a press release, "local governments may be forced to reduce the level of response because we simply can't afford it." Officials from many of the world's major cities could write almost the same thing of their own national leaders.

S.L. Bachman is the author of “Globalization in the San Francisco Bay Area”, published by the Pacific Council on International Policy, www.pacificcouncil.org.

© Copyright 2004 Yale Center for the Study of Globalization