Globalization 3.0 Has Shrunk the World

The process of globalization continues to produce new surprises. Thomas L. Friedman, whose 1999 classic “The Lexus and the Olive Tree” has been translated in 30 languages, offers an update on globalization since his last interview with YaleGlobal editor Nayan Chanda a year ago. Friedman says that the first phase of globalization - the globalization of countries - lasted from roughly 1400 until World War I. Over this period, the world shrunk from “Size Large” to “Size Medium”. The second phase of globalization - the globalization of companies - lasted from the end of World War II until 2000, as the world shrunk from “Size Medium” to “Size Small”. According to Friedman, the newest phase of globalization has continued since 2000, shrinking the world from 'Size Small' to 'Size Tiny'. Now,he says "we're talking about the globalization of individuals." One Indian entrepreneur has provided a striking example of this, says Friedman, by finding young people trained in Hindu temple art and hiring them to do computer-assisted character design for American and European game companies. Friedman acknowledges that this example highlights a problematic trend for white-collar employees in the US. “We have to listen to those people, and we have to think about what strategies, what public policy, we can design to cushion them,” he says. “Whether it's wage insurance, whether it's health benefits, whether it's re-education and training, we have to have public policy that addresses their pain.” Additionally, in order to respond to the outsourcing challenge, Friedman says the US must “open India's markets more for the things we still do well, whether it's financial services, insurance, entertainment. Countries like India and China still have a lot of tariff barriers and non-tariff barriers, not to mention Japan, and we really need to be busting open those markets as well. We want to increase aggregate demand everywhere.” - YaleGlobal

Globalization 3.0 Has Shrunk the World 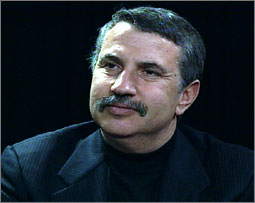 The following is a partial transcript of Nayan Chanda's interview with the New York Times foreign affairs columnist Thomas Friedman conducted on March 25, 2004.

Nayan Chanda: Tom, you were here about a year ago. And recently you came back from India, one of those countries that you mentioned as being one of the leaders in globalization. So what can you tell us about the changes that have come in globalization since our last interview?

Thomas Friedman: Well I guess the biggest change, and I really learnt this in India - having spent the last two years on 9/11, post-9/11, pre-Iraq, Iraq, and post-Iraq - I really had lost the thread of the globalization story, and I found it in Bangalore, on my last trip to India. And here's what I discovered. I think we've seen in the world three great eras of globalization. The first I would call Globalization 1.0. And that was primarily the globalization of countries that began with Vasco da Gama and Christopher Columbus globalizing their countries and exploring the world on behalf of their countries. And that era, one could say, started in the 1400s and continued all the way - in its own way - right up to the invention of the steamship, the railroad and the telegraph, but ended with World War I. I call that Globalization 1.0. And it gradually shrank the world from a “Size Large” to a “Size Medium.” Then came Globalization 2.0. And that was from World War II right up until the year 2000, until Y2K. And it really intensified from 1980 until 2000.

Chanda: The manifestation of this Globalization 3.0, where in India did you see this?

Friedman: Well I'll give you an example of a company - you've never heard of it - Dhruva. Dhruva is a little game company in Bangalore, founded by a guy named Rajesh Rao, a young man who is really into games. You know the gaming business today is bigger than Hollywood. The X-Boxes, all those things - more of those games are sold and downloaded off the internet than movies! So this is big business. Well, Rajesh, he wanted to get into this business. And he thought India had a lot of unique skills because there are a lot of sons and daughters of Indian Hindu temple artists, where drawing and painting have been elevated to a high art, who are very adept at transferring those skills to computer-assisted design to draw up characters. And he thought, “Woah! If I could use all this technology to connect these Indian artists to the game industry, I could be part of this game! So what did he do? He started a company! They bought some PCs, got a fiber-optic Internet connection - the pipes and the PCs. And then they used the software that is now available to offer their services to draw characters for American or European game companies.

So they downloaded from Google all this Wild West imagery. They used email, and all these new software for computer-aided design, and they developed a whole game which they marketed over the internet, which so attracted American companies that some of the biggest game companies in American now are outsourcing characters to little Dhruva on a backstreet in Bangalore. That's a world gone tiny.

Chanda: There is this outcry over outsourcing of jobs to India, and people are seeing globalization as a threat to the United States now. What do you say to those people?

Friedman: Well, I say two things. One is that, first of all, I feel your pain. If I were an accountant, if I were a radiologist, if I were a call-center worker, or my kids were, I would be frustrated, I would be angry, I would be worried, because this world without walls has shrunk to a “Size Tiny”, and it seems to be taking my job with it. I think that we have to listen to those people and we have to think about what strategies, what public policy, we can design to cushion them. Whether it's wage insurance, whether it's health benefits, whether it's re-education and training, we have to have public policy that addresses their pain. You know, there's an old law in trade theory that says that people who are harmed by free trade know exactly who they are. People who are benefited by free trade have no idea. And, so people who are harmed, know who they are, and now these are increasingly white-collar workers who vote and write op-ed pieces for the New York Times. And so they will be mobilized, they will have a political impact, and we can see that today.

So, to me, first of all, we have to listen to what these people are telling us. At the same time, we should not be putting up walls, because what has kept our economy going forward all these years is our ability to innovate. It's our ability to come up with companies like Google, companies like Yahoo, and Ebay, and Amazon. Those are all the products of American innovation. They weren't invented in India, they weren't invented in Germany, they weren't invented in Beijing. They were invented in a culture, in a society that is incredibly flexible, that doesn't believe in walls, is hypercompetitive, but has a decent regulatory system, great capital markets, a venture capital system that rewards innovation, and a culture of try, fail, try, fail, try, fail, try, succeed, start Ebay, become a billionaire. And I am confident, as long as we maintain those things, we'll then have the resources to cushion the people who are hurt by that innovative cycle.

But my friend David Rothkopf, former under-secretary of commerce , says that most jobs are not being outsourced to India or China, they are being outsourced to the past. There's someone who was working as a counter employee for Southwest Airlines who probably doesn't have their job now, because I can go on my own computer and download my own boarding pass on to Southwest. So many more jobs are destroyed by Schumpeter [referring to economist Joseph Schumpeter's theory of creative destruction of companies brought by the march of capitalism] than are destroyed by India. They're destroyed by creative destruction and technological change. Thirty percent of Americans worked in agriculture in 1900. Where is that now? Somehow the economy has absorbed that, as long as you have an economy full of innovation. The other strategy has been tried; it's been tried in places like Germany. And look at all the problems they have, the chronic unemployment that they have, and the place is full of cushions, full of social welfare programs. But meanwhile, they have this chronic unemployment.

Chanda: The other thing is the question of creating demand. Part of the world population is living in misery -- those people are outside the market. So unless those people come to the market to create demand for goods, you are going to be flooding the current market with more supply, prices being depressed and people losing jobs.

Friedman: Which is why we have to be doing things in response to the outsourcing challenge. One of the things we have to do is to open India's markets more for the things we still do well, whether it's financial services, insurance, or entertainment. Countries like India and China still have a lot of tariff barriers and non-tariff barriers, not to mention Japan, and we really need to be busting open those markets as well. We want to increase aggregate demand everywhere. Just as Indians don't want to be told by us, “Say, wait a minute. You want us to buy your Microsoft and your Coca-Cola, but you don't want to send us any of your jobs,” we don't want to be in the position of saying to India, “Hey, you guys want our jobs, but you don't want to buy our Microsoft and our Coca-Cola, or our E-Trade or our Merrill Lynch.” I think part of this - the result of what I call the “flattening of the world” - is that there is going to have to be an equalization of trade barriers, which is to say they're all going to have to come down.

Chanda: So, there are a lot of changes that are required by this new Globalization 3.0. Friedman: Absolutely. The outsourcing thing is like the canary in the coal mine. And what is chirping is, “You're in a new world, you're in a new world.” That's what it is telling us.

A full video of this interview can be found here.

A transcript of this interview can be found here.

© Copyright 2004 Yale Center for the Study of Globalization