Globalization and the Corrupt States

Corrupt states thrive on producing goods and services that are illegal but increasingly profitable in the global world. Due to low costs of transportation, more illegal goods enter middle-class markets. Once criminal groups start controlling an economy, they throw their support behind corrupt politicians in government, complicating the work of local activists or international organizations that seek reform. "Meaningful reforms do not begin in the corrupt states themselves, but in the rich world that consumes illegal goods and services," suggests economist Branko Milanovic. Legalizing the goods would reduce profits, and corruption ends when the profits vanish. – YaleGlobal

Globalization and the Corrupt States 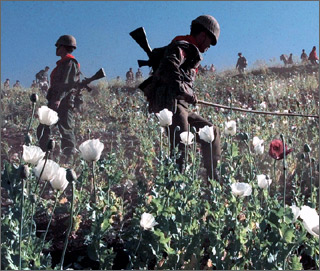 Field of corruption: With globalization, corrupt nations profit from

WASHINGTON: It's become a cliché that globalization in the sense of greater integration of the world economies has brought both pain and gain. But in the general painting of the dark side of globalization, one aspect is frequently ignored: Intensified trade and travel have enabled the rise of corrupt states that thrive on illegal businesses. Only by changing the rules of the same global trade that has allowed corrupt states to grow can one hope to remove this blot on globalization.

"Corrupt states" are different from a more commonly used category of "failed states." The distinguishing characteristic of a failed state is its inability to exercise control over its national territory; a key feature of a corrupt state is its weak governance structure, lawlessness and inability to move toward self-sustained development. While failed states have existed in the past - think of the Ottoman Empire in its last century - the spread of corrupt or criminalized states is a recent phenomenon, almost non-existent before the current wave of globalization. Is this a coincidence? 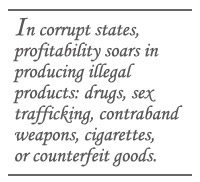 The best examples of corrupt states are found in the less developed parts of Europe, Asia and Latin America, exemplified by Albania, a regional center for human trafficking and cigarette and drug smuggling; Burma and Afghanistan, key drug-producing countries; and Paraguay, center of arms smuggling and counterfeit goods, and Colombia, the largest coca producer in the world. And indeed, in both 2005 and 2006 according to two World Bank governance indicators - control of corruption and rule of law - Albania is the most corrupt and lawless European country, exclusive of several former USSR countries, followed by Kosovo, the UN-administered territory that shares many characteristics. In Asia, Burma and Afghanistan easily top the list, again in both aspects of misgovernance. In Latin America, Haiti and Paraguay are deemed the most corrupt with Colombia somewhat better ranked, but still significantly below the continent's average.

Globalization's contributed by creating new suppliers - for example, Albania could not supply people and guns while it was a closed state. More significantly, globalization reduced transportation costs, bringing these goods and services within the reach of the middle classes in the rich world. East European women are shipped to Western Europe because they are willing to provide sex services more cheaply than the local prostitutes, while their illegal status keeps them firmly in the grip of the mafias.

Low transportation costs help Moroccans and Nigerian "illegals" come to Spain, or Albanians and Moldovans go to Italy and France. 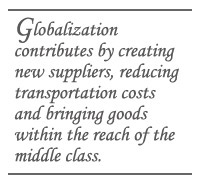 While, according to the 2007 UN report, the overall production and use of narcotics have stabilized (about 5 percent of adult world population is estimated to be annual users of opiates), the unit street-price is down and the global value of the narcotics trade is staggering. It is estimated at 5 to 6 percent of overall world trade, slightly larger than the combined global trade in agricultural products and cars. As in the case of electronics, toys, textiles or mineral water, the costs of producing and transporting drugs, women, weapons or copy-cat products have declined - and globalization opened up new possibilities for countries to specialize.

But, from an economist's perspective and leaving ethical issues aside, why would specialization in drugs, sex or guns be any different from specialization in textiles or computer chips? The reason lies in the illegality of the transactions, which naturally attracts entrepreneurs who, in addition to the usual business acumen, possess a requisite dose of ruthlessness. Enter the so-called "mafiya."

Once organized crime and its supporters become the largest employers in the country, they play the same role that a more conventional business plays in other countries. They try to influence the political process. Moreover, they need to control the political arena - election of presidents and parliaments - even more tightly than "normal" business people because their very existence depends on having a government willing to tolerate violation of international rules as the country's main activity.

The government structure that emerges is "endogenous": It reflects domestic social and economic structure, which in turn is the outcome of greater international trade and economic incentives, much like other countries, except that the governance structure is, almost inevitably, more corrupt. The recent World Bank and International Monetary Fund's insistence on reforming governance in these countries is bound to fail because the cause is misdiagnosed. 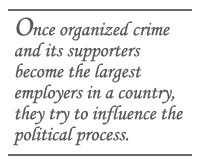 Governance is viewed by the international organizations as something "exogenous," something that a country just happens to have and which - through a better electoral process, more transparent laws and more honest lawmakers - can be improved. Thus the international organizations are in a permanent, and fruitless, search of an "honest" lawmaker, an Eliot Ness who will bust corruption and illegality. They fail to notice that governance structures respond to underlying incentives, and to expect an honest person to rise to power in a corrupt state is akin to expecting a person with no financial backing from big business to be elected president of the US. In both cases, the outcome of a political process reflects the country's underlying economic conditions.

A different approach is necessary: legalize the currently illegal activities like prostitution and drug use and modify the often draconian US and European immigration laws that stimulate human trafficking. If prostitution and drugs indeed became like haircuts and candies, their production would obey the same rules: Countries that export beauty services and confectionary products are not notably more corrupt than others. Some of the current entrepreneurs would remain in these activities, others would move to others. In either case, there would be a general "normalization" akin to what was observed after prohibition on alcohol sales was lifted in the US. Thousands of "bootleggers" became normal producers of alcohol, alcohol-linked criminality decreased, and only a minority of those with preference for high risk and crime moved to other illegal activities.

Most people involved in illegal activities today are not doing it because they love crime and are intrinsically different from the so-called law-abiding citizens. They do it because the gains are so high. Or to give another example: They're no different from "normal" businessmen in Eastern Europe, Asia and Latin America who violate the law rather than pay exorbitant taxes but would, if taxes were reduced, rush to become "legal." 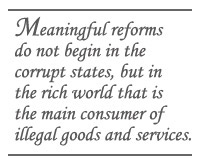 The key is that meaningful reforms do not begin in the corrupt states themselves, but in the rich world that is the main consumer of illegal goods and services. This requires a total overhaul in our thinking about the root cause of a corrupt state. Many of the most corrupt states are "corrupt" because they specialize in goods and services that are deemed illegal. But what is illegal today is not necessarily illegal tomorrow. "Illegality" is a historical category, as the long history of accepted prostitution and drug use shows. Thus if illegality is the main cause of corrupt governments, then the best way to root out corruption is to remove illegality.

The way to help corrupt countries does not lie in hectoring them about the virtue of good governance, but in pushing for the legalization of their main exports. The target constituency of the international organizations' advocacy thus becomes the rich, not the poor, world.

Branko Milanovic is a lead economist in the World Bank’s research department and an associate scholar with the Carnegie Endowment for International Peace.