Extremism and authoritarianism are rising, and Helena Norberg-Hodge, writing for the New Internationalist, blames economic globalization. She writes about Ladakh, an area administered by India that opened to tourism and development in mid-1970s. With increased economic development and external funding, local farming went into decline. Competition for jobs increased, contributing to ethnic and political differences. Global media reports added to insecurity. The young leave villages, and decision-making shifted from villages to the centralized government. She explains that many people “lost confidence in themselves and their culture" and "It is not hard to see how people so insecure and disempowered can turn to anger and extremism.” Similar insecurity undermines jobs, politics, local control and local identity worldwide. “Meanwhile, governments are left to cover the heavy social and environmental costs of global growth… and many people see their government leaders as inept at running the nation’s affairs, while the growing wealth of businesses suggests that the solution is to ‘run the country more like a business.’” Another challenge: Growing numbers of insecure citizens are “susceptible to false narratives purporting to explain their precarious situation.” Communities must restore solidarity and self-control by resisting consumerism, extremism, deregulation and standards of contentment driven by external forces. Individuals and communities can redefine prosperity. – YaleGlobal

Read the article from the New Internationalist that suggests how rapid economic development and insecurity can lead to discontent, extremism and authoritarian governance.

The KOF Globalisation Index strives to measure the economic, social and political dimensions of globalization, on the rise since the 1970s.

The Global Terrorism Index from the Institute for Economics and Peace strives to analyze the impact of terrorism - and points out the world lacks an internationally-accepted definition for terrorism.  The index suggests that South Asia has had the highest impact from terrorism since 2002. 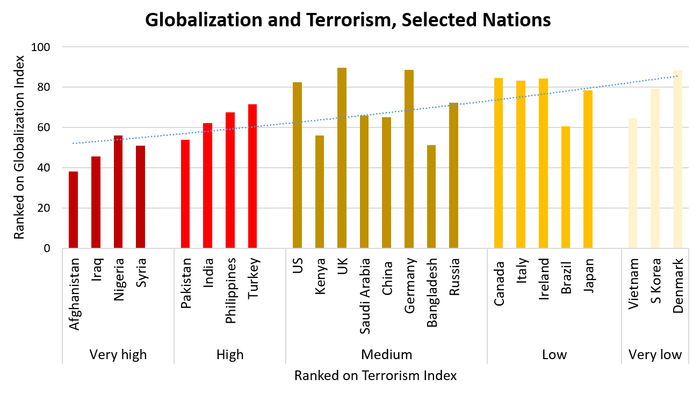 A comparison of the two separate indices on globalization and terrorism suggests that less globalization can be linked with terrorism (Source: KOF Globalisation Index and Global Terrorism Index)

Inequality in India and China: Is Globalization to Blame?

Globalization Has Role in This Double Whammy