Globalization and the Markets – Part I

Stock-market indexes have tumbled like dominos around the globe, exposing vulnerability of intricate economic connections. A crisis in one nation – and the panic – can quickly bounce from one country to the next. A major cause behind the stock-market plunges the world over are US financial instruments designed to spread and protect risk by including all manner of home mortgages, explains economist David Dapice in the first part of a two-part series. But banks, credit-rating agencies and investors did not count on a decline in US home prices, the foundation for many of the fancy debt instruments. As home prices and wages fall and food and other prices rise, US consumers lose confidence, Dapice explains. Credit is now tight throughout the world, putting a stranglehold on business. Rising oil prices, massive debt and slow job growth in the US hamper flexibility in tackling the crisis. Meanwhile economists have limited tools for untangling the complicated derivative investment packages or restoring trust to the markets necessary to avoid a long recession. – YaleGlobal

Globalization and the Markets – Part I 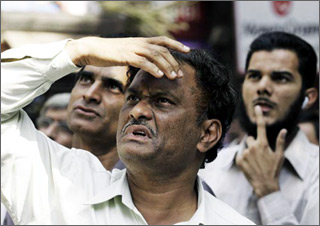 Foreclosures rise in the US, markets fall worldwide: In an integrated global economy, a massive stock-market sell-off frightens shareholders like these in Mumbai

MEDFORD: The recent meltdown in global stock markets is the first truly global financial crisis since the word “globalization” became widely used. While Latin America and Asia suffered in the 1990s, this crisis marks a wider, possibly deeper set of problems underlining how vulnerable the integrated world economy has become to failures in one part of the globe. What began as worry over tremors in the US mortgage market has become a full-blown confidence crisis.

The fundamental problem is that financial innovation in the US has outpaced the ability of either private managers or public officials to monitor what’s going on with the financial industry slicing and dicing loans to create ever-newer instruments that few understood. That complexity has tied the financial world in knots as it seeks a way out of the mess.

Broadly speaking, each part of the US financial system became fee-oriented and ignored basic rules of fiduciary responsibility. Mortgage companies originated new home loans – sub-prime mortgages and others – for a fee and promptly sold them. Banks bought, bundled, and then sliced and diced these mortgages into different risk classes, selling them to hedge funds and even central banks. How risky was each part? The ratings agencies, paid by the banks that originated these bundles, looked only at recent default experience. Since real-estate values had been rising, any borrower in trouble could sell the property or refinance, so defaults were low and the bundles seemed safe enough for triple-A ratings.

The buyers of these mortgage fragments relied upon the ratings agencies. This debt was safe, but only until property prices began to drop. Then the lack of underwriting standards – not even checking the income declared in some cases – began to matter.

If the problem were confined to sub-prime mortgages, it would be a serious but not overwhelming problem. However, many adjustable-rate mortgages, home-equity loans, second mortgages, credit-card debts and even “regular” mortgages are also threatened. As property values fall, many borrowers find their debt is worth more than the property. At that point, it often makes sense to walk away from the property and let the bank foreclose. One reason for the panic is that nobody really knows how many millions of foreclosures there will be, how much these will depress real-estate values and thus render additional classes of debt suspect. Some observers expect that commercial-property and regular bank loans will also suffer as this process proceeds.

Many banks, confident about the loans, ended up holding some of the debt they originated or promised to take back debt if the buyer wanted to sell. Banks now have less equity capital relative to their loans, as needed to remain within financial standards. Until that’s repaired, banks will likely be conservative in making loans. This problem is not solved by low interest rates, though they might ease the problem over time. With inflation at 4 percent and a weak dollar, it’s not clear if the Federal Reserve can lower interest rates much below 3 percent without running risks. As of Tuesday, the Fed lowered the overnight rate on interbank lending to 3.5 percent, and now has little room to maneuver.

Fiscal policy in the US is similarly hobbled. The Iraq war was “paid for” with tax cuts, following the neoconservative wisdom that government deficits don’t matter. Because debt to GDP has grown so much, the feasible amount of tax cuts is small, only about 1 percent of GDP. As housing and stock prices fall, the net worth of families declines and consumption drops. Since several trillion dollars of wealth are likely to evaporate and consumption is likely to fall by several hundred billion dollars, there’s little faith in the $150 billion fiscal-stimulus package announced by the Bush administration. In short, there’s an ongoing massive decrease in both housing and financial wealth, aggravated by reduced bank lending, and limited ability of monetary or fiscal policy to respond. This explains why US markets are weak and many Americans – and some Wall Street investment banks – think a recession is already here.

But what about decoupling? Wasn’t the rise of emerging market economies and growing trade among them supposed to reduce the world’s reliance on the stressed US consumer? Several points explain the simultaneous movements in stock markets: First, many banks around the world bought these “collateralized mortgage obligations” issued by US banks. Several European banks have suffered billions of dollars in losses and may face further difficulties as other loan losses rise in a soft economy. This makes them more conservative. Indeed, the European Central Bank has actually pumped in more liquidity than the Federal Reserve into shaky credit markets. As the euro has strengthened – a logical step as global central banks diversify out of dollars for reserve holdings – exports have come under pressure and imports have grown. Finally, several EU nations also had overheated real estate that has begun to cool. Overall, Europe finds it has diminished prospects for growth.

Japan was already weak with a negative quarter of gross domestic product – a broad measure of the economy in 2007. Most of its growth came from exports, which are now uncertain. Japanese consumers seem reluctant to spend, and business investment is muted as exports slow and population declines. 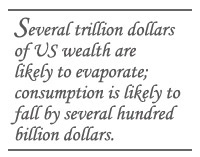 Australia and Canada had strong currencies driven by the commodity boom, now looking tired. They might escape if the “BRIC” story had remained intact and the large emerging economies of Brazil Russia, India and China continued to grow. However, the Chinese and Indian economies face issues of stock market and real-estate bubbles, inflation, social unrest and too-rapid credit expansion. They, too, are more fragile, and when money began to seek safety, they no longer seemed a safe haven.

So where is the world economy now? The optimists say that the real problem is panic, not reality. Growth may slow, but is intact. Even if the US suffers a recession – and many predict it will not – the other parts of the world will continue to grow and by the end of 2008, the worst should be over with. The pessimists cover a broader range of outcomes, but believe that the financial fallout from bad debts could feed upon itself and become worse. Given the limited ability of fiscal and monetary policy, they see a much larger chance of a prolonged slowdown or even severe recession.

Given the complicated financial links among nations, it’s not just a question of projecting a modest decline in exports for fast-growing nations like China. Rather, it’s a matter of understanding how the world’s economies are bound together in various ways and avoiding a self-fulfilling decline in investment due to conservative banks and diminished growth expectations.

A witty economist once said that stock-market declines had predicted nine of the last four recessions. The message is that a decline in stock prices need not predict future economic difficulties.

In this case, the complexity of the debt instruments may prevent countermeasures from effectively preventing a recession. In the “old days” of the 1990s, a local bank might have negotiated with a homeowner, reducing the mortgage payments and avoiding foreclosure. Without new legislation, this is difficult as the mortgages are owned by many parties; the payment collector does not own the mortgage and cannot easily negotiate with homeowners.

Other debt instruments are similarly complex, and it just may be that like the sorcerer’s apprentice, we have created things we do not understand and cannot easily control. If that is the case, the stock markets may be telling us something correctly this time.