Globalization and the Markets – Part II

As anxiety spread about a possible recession hitting the US, stock-indexes went into sharp decline in Europe and Asia. Not surprisingly, worried investors scrutinize the Chinese stock market, as conventional wisdom suggests that China investments are the world’s next over-valued bubble. But analyst Steven Xu points out that the Chinese market could continue to grow, especially this year as China prepares to host the Olympics and with the typical Chinese household keeping 70 percent of its savings in bank deposits. The Chinese have confidence that their government can stabilize the markets, and indeed, the government has taken steps to deflate rising stocks and prevent a sudden pop. Moving ahead with a proposal to allow China’s investors to purchase shares in the Hong Kong exchange, Xu notes, would contribute to stability and serve as a major step toward gradual integration of China’s stock market with the global markets. – YaleGlobal

Globalization and the Markets – Part II

Despite initial flutter, China won’t let its stock market fall in the much anticipated year of the Olympics
Xu Sitao
Thursday, January 24, 2008 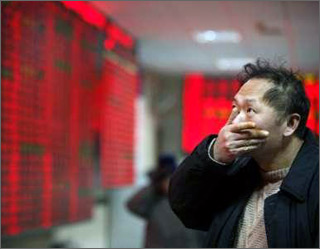 BEIJING: After a two-year bull run, China’s stock market has joined other Asian markets in what looks like a free fall. But China’s dominant political consideration about maintaining stability during the year of the Olympics and broader economic considerations are likely to stem the slide, gently cooling the economy.

From 2000 to 2005, the Shanghai A-share index went nowhere, hovering around 1000 despite strong economic fundamentals, including double-digit GDP growth and low inflation. Then during the past two years, the market strengthened – even amidst investors’ increasing fears over rising inflation, investment excesses and economic-tightening measures including six interest-rate hikes in 2007. The A-share index has risen from less than 1000 to about 5500 in just two years. Kicking off 2008, the bearish sentiments seen in global bourses over rising oil prices, a weakening US dollar and expectations for a US recession did not initially hinder continued run-up in Chinese stock prices.

This prompts questions about the A-share market: 1) Is the bubble out of control? 2) Would the government dare burst the bubble in the year of China’s coming-out party with the Olympics? 3) If the market crashes, how would that affect the Chinese economy as well as the world? Conventionally speaking, the Chinese stock market shows clear signs of a bubble: extremely high valuations, with shares trading at price-to-earning ratios of 50 and forward ratios of 40. This is not a cheap market by any stretch of the imagination.

In addition, domestic investors can access cheaper alternatives, as many Chinese firms are listed in both China (A shares) and Hong Kong (H shares). In other words, capital controls alone cannot explain why A shares are so over-valued. Today, H shares trade about 30 percent below their mainland counterparts. The valuation discrepancy between A and H shares has prompted more Chinese firms to return to China to tap into cheaper capital and induced more Chinese investors to speculate, both legally and illegally, in H shares.

However, as history has proven repeatedly, bubbles can reach immense sizes before they finally pop. Although Chinese stocks are pricey, a number of structural factors could yet push A shares higher in the Year of Rat.

First, many Chinese citizens are just beginning to taste the culture of equities – or financial risk in general. This might sound odd given the stories of rampant speculation, day-trading employees and record numbers of accounts at brokerage firms. Such anecdotal evidence on speculation is true. But, in the larger picture, the typical Chinese household still has over 70 percent of its savings in bank deposits, compared with 30 percent in Japan, less than 25 percent in Europe and less than 20 percent in the US.

Even India, whose per-capita income is less than half that of China’s, the average household has only 40 percent of its savings in banks, the rest in bonds and equities. Given that India’s stock exchange is more than 100 years old, while China’s stock-market did not start trading until 1994, perhaps this is not surprising.

Second, China’s stock market is not nearly as large as its market capitalization may suggest. True, market capitalization is about 120 percent of China’s GDP, but complicated ownership structures of listed state-owned companies mean that the proportion of free float is only 15 percent. With such limited choices of stocks, the index rises fast so long as liquidity is favorable.

Third, although everyone has specific complaints, Chinese investors have faith in the government overall. As an old Chinese saying goes, “The market is driven neither by bears nor bull, rather than by pigs.” Note, the word “pig” and the last name of Zhu Rongji, former prime minister and a principal architect of economic reform, are homonyms.

During this year of the Olympics, it’s questionable whether the government would tolerate a sharp correction of stocks. The easiest way for the government to reverse or mitigate a sharp fall in the market would be to lower interest rates and thus discourage habitual saving in banks. The reality is that the majority of retail investors anticipate the government to step in on any major corrections. Many expect that the government’s obsession with holding a “successful” Olympics will likely ward off any negative sentiment.

Despite the momentary drop in the market, there’s good reason to believe that the economy won’t suffer. During the five-year bear market, until early 2006, the economy accelerated and the corporate sector grew. Even with the current boom, equity financing accounts for only 15 percent of total corporate financing, according to the China Banking Regulatory Commission.

Meanwhile, China’s government is aware of market over-valuation and has taken a number of steps to gently deflate it. The goal is not to prick the bubble, but rather prevent social consequences caused by any potential crash. Assuming Chinese export growth will be hit by a slowing US economy and also assuming that Chinese producers are unlikely to reduce production, inflation should subside once export growth decelerates significantly. As such, the existing tightening measures – both interest-rate increases and administrative control in credit – could be halted as early as mid-2008.

However, nagging upward pressure on the Chinese currency may nevertheless be exacerbated as most major central banks are already in an interest-rate easing mode. Rate differentials between the renminbi and major currencies are expected to widen as a result of China’s faster build-up of foreign reserves – nearing $1.5 trillion.

So what should China do? The worst combination has to be unstoppable currency appreciation combined with higher stock-market valuations. The best outcome would be accelerating capital outflow to bring down the stock market and mitigate the upward pressure on the renminbi – specifically implementing the so-called Hong Kong share “through train” aimed to facilitate purchase of Hong Kong shares by Chinese domestic investors through the Bank of China’s Tianjin branch. This initiative, which effectively put greater capital relaxation ahead of a more flexible exchange rate, is controversial. Few developing countries have experimented with similar tools. Indeed the over-riding lesson of the Asian financial crisis is to go slow in opening capital accounts and embrace floating currencies.

So, why should China adopt the opposite sequence in liberalization?

Thailand and Korea were deeply mired in foreign-currency debt in the mid-1990s. China’s saving rate is over 40 percent of GDP today, and the country is a large net exporter of capital. A much stronger renminbi won’t reduce Chinese consumers’ saving rates. Therefore, expanding investment choices for domestic savers is the best way to bring the over-valued A shares to a sensible level.

In conclusion, China’s domestic stock market is likely to be a domestic affair in 2008 as it has in the past. Continued expectation of a rising currency and the government’s wish to ensure a favorable backdrop to the country’s coming-of-age event will keep bullish sentiment intact.

In short, politics will triumph over economics in 2008. Policy initiatives in cracking a bigger hole in capital accounts are expected to cool A shares somewhat, but not weaken the surging domestic demand for financial assets. From international investors’ perspective, the movement of Chinese stocks should not be viewed as a reliable leading indicator of the broader economy. That said, meaningful capital-account relaxations will integrate China’s stock markets into global ones. The “through train” would be a big step in unifying Shanghai and Hong Kong’s Hang Seng indexes in the long run.