In many academic disciplines, books, journals, and letters have long been the preferred ways of communicating over long distances. Thanks to the 'information revolution' facilitated by the internet, though, today the spread of knowledge around the world can happen almost instantaneously. In Physics and other branches of science, researchers and scholars are enjoying tremendous intellectual benefits from daily interaction with others around the globe - all at the click of a mouse. - YaleGlobal

With faster communications, scientific discoveries are speeding up the globalization of knowledge
Ramamurti Shankar
Friday, March 28, 2003 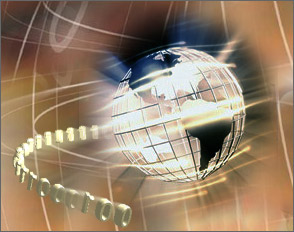 Globalization, meaning the economic, social and technological revolution of recent decades, has shrunk the world. It is not surprising that those who have helped make the world a smaller place have also benefited enormously. For scientists all over the world, the internet and electronic publication revolution have proved a boon - expanding the areas of research and accelerating the pace of knowledge exchange.

Scientists have been one of the early beneficiaries not only because of the technological advantage they have but because of the universality of the problems they address and the language they speak - mathematics.

Let us begin with the following fundamental fact: the laws of science are the same all over the world. For subjects which deal with inanimate things, like Physics, one can go further and say the laws are the same all over the visible universe. These laws are best expressed in the universal language of mathematics. Consequently, physicists all over the world (or the universe), thinking in different mother tongues and working under a variety of conditions, will discover the same laws. For example the Raman Effect, which describes the change in frequency of light as it is scattered by a medium, was discovered in a makeshift laboratory in Calcutta but would have been the same had it been found in Pasadena (and it would have earned the same Nobel Prize). It is also believed that the laws of nature are not only the same everywhere, but also unchanging over time. Thus the globalization of science, in this sense, started when the universe began with the Big Bang about 14 billion years ago. 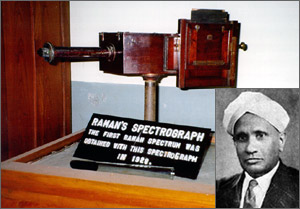 C.V. Raman and his device in a Calcutta lab. The same discovery could have been made in Pasadena.

With Nature playing the role of ultimate arbiter, one may naively think that it is a level playing field for all practitioners. Indeed, the discovery and recognition of the Raman Effect seems to corroborate this. Unfortunately, however, in reality there are many inequities that place scientists in some locales at a distinct disadvantage. These inequities are related to the exponential growth of scientific activity arising from the following inalienable dictum: the greater the sphere of knowledge, the larger its contact with the area of darkness. Thus each new answer brings with it more questions, and the quest for truth grows in its scope, breadth, and pace. This basic fact led to a severe communication problem. Thanks to the revolutionary effects of the internet, however, Physics and other disciplines have a powerful new tool for daily information exchange.

To appreciate the innovation, one must understand how physicists normally operate. Typically someone does an experiment that yields an unexpected result. For example, in the case of superconductivity one finds that as the wire is cooled down, the electrical resistance drops gradually and then suddenly plunges to zero, meaning a current can flow without a voltage to drive it! This result is then sent to a journal, refereed by peers and eventually published. It is then reproduced in other laboratories. Meanwhile, theories are espoused to explain what is going on in the wire. Each conjecture is sent to some journal, refereed, and then published. Sometimes the answer to our research questions come in one fell swoop from one source, and in other cases (e.g., superconductivity) they take several decades to fall into place, and come from multiple authors dispersed the world over.

It is in this process of interactive progress that scientists in the Third World began to feel at a disadvantage as the pace of research picked up, starting in the 1960's. First, they got copies of the journals months after they were published. If they had a clever response to what was published, they could send it in to some journal. The refereeing took some more months since it was done by regular mail. Eventually, the journal carried the paper. But the author had to pray that his colleagues in the West had not had the same idea in the intervening months. Matters became worse a few decades ago, when the custom of sending out preprints began in the West. Preprints were non-refereed previews of the works circulated by the authors to a few chosen colleagues. If you were not in the club, you were not privy to this information and had to wait for it to appear in the journals, while those in the club had access to possibly valuable data or theoretical ideas. Even if you were in the club, but lived in the Third World, it took some time for you to get the preprints by sea mail. If you sent your own preprints (on what looked like recycled toilet paper) they just did not carry the same authority as the glossy and beautifully typeset or laser-printed ones from the West.

When the internet came along, all this was truly revolutionized. In 1991 Paul Ginsparg, then at the Los Alamos National Lab set up a website (called xxx.lanl.gov) where authors could upload their papers. Here is how the system works: If you want to publish a result in his archives, you create a source file, usually in a language called TeX and send it to his machine electronically. The next morning readers all over the world will see the abstract of your paper, along with abstracts of all other papers sent in the last 24 hours. If their interest is aroused, they can click another button that will show them the whole paper. This will not be a TeX file, which is an amalgam of text and commands, but the finished product (where what you see is what you get) thanks to the TeX program devised by another genius, Donald Knuth. The reader can either move on, or print it out and file it. The author is free to submit the article to a regular journal, and when the paper is published there, indicate so on Ginsparg's machine. This has been going on for nearly ten years now. Ginsparg wrote the entire program on his own, without funding from anyone, in his spare time. It was nothing short of visionary to think of it, and nothing short of brilliant to execute it and set up machinery that never has crashed as far as I know. By using TeX, (whose files contain ASCII characters only) as the medium of communication, he made sure people with any kind of hardware, anywhere in the world, could participate.

As long as you have access to the internet, you can search the electronic archive and dig up any paper back to 1991. From any one paper, you can follow the trail to yet another with the same ease. For scholars who in years past spent hours sifting through moldy library volumes, this is an incredible boon! There is no question of a missing volume, no question of the one issue you care about having "gone to the binders", looking for a journal your institution does not carry, or not knowing which journal the article came out in. There is also no danger of publishing a paper and then finding out that the same results appeared in a journal you do not read or were not aware of. Nowadays, in just about any area of physics the number of people who do not read the archived papers online is very small - and rapidly shrinking. 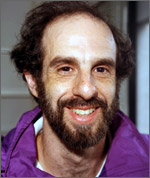 Ginsparg's system is a great equalizer. Consider some physicist from the Third World. He no longer has to wait four to six months before he gets the copy of the new papers. If he has a clever response, he does not have to wait another four to six months (possibly longer, if referees had questions) to get his response published. This debilitating delay of nearly a year (which can be a kiss of death in today's fast-paced environment) is completely wiped out in the electronic version. The "inner circle" of people on the preprint list is no more. As for the appearance of the paper, the situation is completely reversed: the paper from the West is printed by the Third World user on Third World paper with a Third World printer and vice versa! Some of these considerations also apply to physicists in lesser known universities in the West. In the electronic archive, as seen on the computer screen, all articles look the same; all are treated the same way and all take the same time to see the light of day, i.e., less than a day. There was a time when you had to choose between paying huge page charges and having your paper face further delays. Publishing on the network costs nothing.

The inventor of this system of scholarly interchange, Paul Ginsparg, was honored with a MacArthur Prize in 2001. The revolution he initiated in a corner of particle physics has since spread to many sister disciplines. If scientific discoveries speeded up the process of globalization in the 20th century, in a virtuous cycle the globalization of communication has accelerated the process of scientific discoveries.

Ramamurti Shankar is Chairman of the Department of Physics at Yale University.