From anti-McDonald's crusader Jose Bové's campaign, to violent clashes between Genoan police and demonstrators, to the anti-globalization theme's growing popularity with left-wing socialist and right-wing nationalist candidates, the idea might seem to be dominating the European political landscape. Not so, says Brookings Institution scholar Philip H. Gordon. In fact, polls show that a majority of Europeans trust their own experiment in trans-national integration, the European Union, to mitigate the negative effects of greater economic liberalization while ensuring its benefits. In the last 20 years, the EU has gradually adapted to the pressures of privatization and free-market reform. Most citizens believe that the EU will preserve those aspects of government and society considered essential to the "European" way of life. Despite its flaws, the EU is indispensable in easing European nations into a globally connected world. – YaleGlobal

Most Europeans believe the European Union can protect them from the downsides of globalization - and they're right
Philip H. Gordon
Monday, November 1, 2004 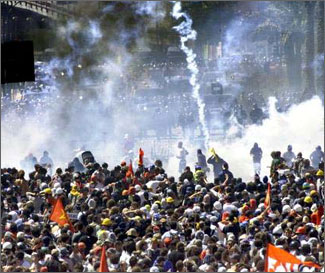 Anger in Genoa: Despite violent anti-globalization demonstration in the street, sixty-four percent of Europeans favored globalization

WASHINGTON: In a recent television interview, leading French Socialist politician and aspiring Presidential candidate Laurent Fabius announced his opposition to the European Union's new draft constitution. It was, in effect, a vote against globalization. While supporting European integration, he explained that the constitution did not sufficiently protect France and its workers against job losses due to globalization. Well aware that some 40 percent of voters in the first round of the last French presidential election supported anti-globalization candidates, Fabius appeared to be positioning himself for a presidential run.

Fabius's decision is just the latest example of what appears – on the surface, at least – to be a built-in European resistance to globalization. Whether in the form of populist political rhetoric, anti-globalization street protests, or the destruction of genetically-modified corn fields, this activity gives the impression of a continent determined to resist the integration of global markets and cultures.

That impression, however, is wrong, or at least highly misleading. Many Europeans worry about globalization's effects on jobs, economic equality, European culture, or political independence vis-à-vis the United States. But the prominent anti-globalization movement is actually a small if vocal minority. In fact, a clear majority of Europeans accepts that increasing global economic, political, and cultural exchange can enrich their country and their lives. They believe that a strong European Union can help them take advantage of globalization's benefits while shielding them from its negative effects. And, regardless of opponents' assertions, the people who believe these things are right.

It is true that globalization and economic liberalization pose greater challenges for Europe than for the United States. One reason is that the state plays a greater role in EU economies: State spending in the EU averages 48 percent of its Gross Domestic Product, compared with only around 36 percent in the United States; social expenditures average over 25 percent, compared with just 15 percent in the United States. Europeans are also more attached to equality and collective rights than are most Americans, who have a proud tradition of individualism. The problem is further complicated by relatively inflexible European labor markets. EU citizens are almost six times less likely than Americans to move from one region to another, and workers are less likely to accept wage or benefit cuts in order to preserve jobs threatened by trade. Finally, many Europeans fear that globalization – in the guise of "Americanization" – will threaten their local culture.

The past 25 years certainly provide evidence of EU adaptation (versus resistance) to globalization. As late as 1980, the major European economies were still highly regulated, capital movements were restricted, and hundreds of non-tariff barriers prevented true economic integration even within the EU. Today, while much progress remains to be made, the internal EU market is complete, most industry has been privatized, and many state subsidies and obstacles to cross-border mergers and acquisitions have been removed.

In retrospect, the "Europeanization" of the 1980s was the prelude to the "globalization" of the 1990s. Even its opponents were the same: left-wing socialists, environmental groups, and right-wing nationalists. These groups all fought against the late-1980s European integration process and the 1991 Maastricht Treaty that consolidated that process. When they lost that debate, the anti-globalization activists turned their energy toward resisting globalization and its manifestations in the late 1990s: the WTO, the Multilateral Agreement on Investment, the World Economic Forum, and the spread of American culture. In other words, whereas in the 1980s, the EU was mainly seen as a force behind globalization and liberalization, by the 1990s it had become a tool for managing those processes.

How does the EU play this role? First, by providing a large, single market, the EU allows its member states to take advantage of many of globalization's benefits among relatively like-minded countries at similar levels of economic development. Europeans find it easier to accept European integration than global integration because of their similar value systems and common commitment to generous social and environmental provisions.

Second, Europeans count on the EU to protect them from the inequalities that globalization can create. The generous provision of "structural funds" (aid to its poorest regions) and a social safety net make the Union safer for globalization.

Third, by aggregating the separate member states' strength, the EU increases leverage in international negotiations – whether on trade, environment, food safety, international finance, foreign policy, or culture. None of the individual states could ever hope to stand up to the United States in any of these areas, but with economy and population comparable to the United States, the EU has increasingly done so. Trade Commissioner Pascal Lamy, for example, negotiates with US Trade Representative Robert Zoellick as a genuine equal. The repeal of US steel tariffs in December 2003, American willingness to eliminate its foreign sales corporation tax scheme, and the agreement not to implement secondary sanctions on European companies that do business with Cuba or Iran are all examples of Europe's collective leverage winning concessions from the United States.

Finally, Europeans turn to the EU to regulate certain sectors, such as agriculture or culture, that would be dramatically transformed by unregulated globalization. Without the EU's Common Agricultural Policy (CAP), for example, globalization would entail the destruction of much of European farming, especially small farms. From the standpoint of global efficiency and production, that would be a good thing. But Europeans (and not only the farmers) apparently would rather pay a significant price – including higher food prices – in order to maintain this aspect of their traditional culture. The EU will eventually have to scale back its agricultural protection, but Europeans expect the EU to manage that process without causing the pain associated with living in an entirely unregulated world.

Many Europeans will, no doubt, continue to protest against globalization – and sometimes for good reason. Growing international interdependence challenges many basic aspects of traditionally European political and economic systems, threatens aspects of national cultures, and leaves the continent vulnerable to new and unprecedented hazards. But globalization also has many positives, including prosperity, development, and cultural diversity. Much of it, in any case, is inevitable. In the EU, Europeans have found a tool to help them manage these processes, taking advantage of their many benefits while protecting citizens from some of globalization's more negative effects. The EU remains an imperfect tool for managing globalization, but it is also an indispensable one.

Philip H. Gordon is Senior Fellow and Director of the Center on the United States and Europe at the Brookings Institution. He is the author, with Jeremy Shapiro, of Allies at War: America, Europe and the Crisis over Iraq (McGraw-Hill, 2004).