Globalization Was Good Then, Not Now

Even as economists fret about sustaining global economic integration and politicians in the wealthiest nations make opposition to globalization a winning campaign theme, the phenomenon continues to connect the world. Such a dichotomy may not continue for long, warns economist Mark Thirlwell. Growing alarm in the developed nations stems from the emergence of powerful competitors in the developing world, especially China and India: Workers in wealthy nations worry about open markets and competition from workers in countries with low wages; industry leaders worry about more competition for non-renewable resources, including oil, and a new economic world order; and environmentalists and a growing segment of the public at large worry that emerging economies and rapid growth will quicken the pace of climate change. Thirlwell argues that governments trying to restrict the inevitable process of globalization will only increase competition and add to their list of challenges. Instead, governments should pursue a strategy of cooperation, continuing along a path that has long led to economic prosperity and security. – YaleGlobal

Globalization Was Good Then, Not Now 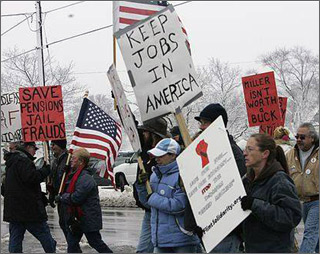 America first: Globalization brought prosperity to the US, but fears of a reversal drive protesters to the street

SYDNEY: After reaping benefits from globalization for decades, the developed world is having second thoughts about its value.

Pollsters in advanced economies report declining public support for open markets and free trade; politicians increasingly gain more political mileage by being identified as a globalization skeptic than globalization booster; and essays fretting over the sustainability of international economic integration fill the opinion pages of the world’s leading financial newspapers and international-affairs journals 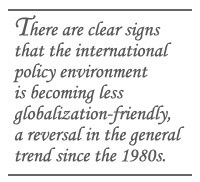 Yet at the same time, globalization itself continues apace, as trade and investment flows surge around the globe, tying national economies ever closer together and delivering perhaps the strongest period of growth for the world economy since the Second World War.

Can this dichotomy persist, or will the rich world’s rising globalization angst be sufficient to send the integration process into reverse?

Certainly, there are clear signs that the international policy environment is becoming less globalization-friendly, a development marking a pronounced reversal in the general trend since the 1980s. After the failed meeting in Potsdam, the Doha round of international trade negotiations looks to be on its way from intensive care to the crematorium. Meanwhile, protectionist sentiment is on the rise in the US and Western Europe, manifesting itself in public and political disquiet over offshore outsourcing, foreign investment in sensitive areas, migration and, in particular, trade with China. 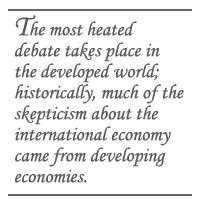 As Washington and Beijing face off over China’s exchange-rate regime and the ballooning bilateral trade deficit, the US Congress is busy crafting bills that threaten punitive sanctions, and pundits warn of the possibility of tit-for-tat trade sanctions. Granted, other forces still drive economic integration – the effects of technological innovation and the competitive pressures arising from the emergence of something that now closely approximates global capitalism both continue to run at close to full throttle. Nevertheless, the foundations for globalization are no longer as solid as they once were.

There are two strikingly new elements to this ongoing re-evaluation of the costs and benefits of the global economy:

First, it is largely being driven not by the failures of globalization – for example, a recurrence of the 1997-98 financial crisis – but instead by its successes, principally the adjustment strains created by the globalization-powered economic take-off in India and especially China. Of course, should the global economic environment become significantly less benign, anti-globalization pressures would likely become even stronger.

Second, the most heated debate is taking place in the developed world. Historically, much of the skepticism about the workings of the international economy came either from developing economies themselves or from their perspective. Critiques tended to be based on the assumption that the system operated largely to the unfair advantage of the rich world and the detriment of the poor, producing calls for a New International Economic Order in the 1970s and 1980s. Such criticisms can still be heard today, but they have been muted by the evident economic success of developing giants like China and India.

Instead, many of the loudest attacks on the consequences of globalization now come from those countries that were the architects and builders of the new global economy. 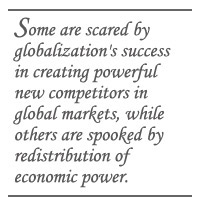 There is a powerful irony here. Policymakers in the developed world spent years preaching to their developing-country counterparts that the path to greater prosperity lay in closer integration with world markets. But when Beijing and New Delhi decided to listen, and moreover, when that policy advice turned out to be right, many in the developed world have found themselves increasingly disconcerted by the results.

Some are now scared by the success of globalization in creating powerful new competitors in global markets, while others are spooked by the security implications of the consequent redistribution of economic power. These critics seem to view unqualified support for open markets on the part of the developed world as a modern variant on the old theme of capitalists happily selling the rope to hang themselves.

A second group of skeptics focuses on the distributional consequences of globalization. They are ill at ease with a rise in national inequality that correlates with growing international economic integration and troubled by the implications of a growing share of trade with heavily populated, low-income economies like China and India. Alongside these longstanding concerns about the effects of international trade, there are new fears that the nature of trade itself has altered and that the steady expansion of the traded sector of the economy to encompass more service-sector jobs has somehow altered the basic rules of the game.

No matter how much mainstream economists argue that the logic of cross-border exchange still applies or how often government statisticians point to the relatively low number of jobs currently involved in offshore outsourcing, the result has been that a new set of workers feels exposed to the winds of international competition, and is hence more ambivalent about the case for open markets.

A third set of issues raising rich-world fears relate to natural resources and the environment. The prospect of intensified competition for non-renewable natural resources is often seized on by those searching for a zero-sum counterexample to most economists’ determinedly optimistic view of trade and globalization as positive-sum games. Fears that the world might run out of resources have been around since at least the time of Thomas Malthus’s 1798 “Essay on the Principle of Population,” despite the fact that to date technological progress and the price mechanism have worked to disprove earlier bouts of resource pessimism. But the prospect of a sustained boost to commodity demand, and hence commodity prices, due to the industrialization and urbanization of the world’s two most populous economies resurrects some old worries together with forecasts of a scramble to lock up control of strategic resources in the face of rising resource nationalism. 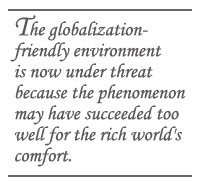 Meanwhile, the environmental consequences of feeding the growing appetites of the Chinese dragon and Indian elephant also make the developed world jumpy. With global warming now seen as a pressing policy issue by a growing share of rich-country voters, the role of both economies as major new polluters receives greater attention. So while the overall level of carbon in the atmosphere is overwhelmingly a legacy of the rich world’s own industrialization, the rapid rise of developing countries on the list of current and future emitters has not been missed, especially given recent estimates that China has overtaken the US as the world’s largest emitter of greenhouse gases.

In summary, globalization in general and the rise of China and India in particular now present the developed world with a series of reasons to worry. Not all of these fears are shared by the same constituencies, and it is far from clear that the best policy response in each case would be to unwind the process of international economic integration. Even so, the pressure on policymakers to temper or modify that process is undoubtedly on the rise. For more than two decades now, much of the world has pursued pro-globalization policies and the result has been a wealthier and more dynamic global economy. That globalization-friendly environment is now under threat because the phenomenon may have succeeded too well for the rich world's comfort.

Mark Thirlwell is director of the international economy program at Sydney’s Lowy Institute for International Policy. The paper “Second Thoughts on Globalisation: Can the Developed World Cope With the Rise of China and India?” is available for download here.