The telephone, satellite television and the Internet have connected the Islamic community of 1.2 billion people across the globe. This connectivity has strengthened Muslims' sense of belonging to one community, which Islamic scholars call ummah. But it has also brought the realization that Islam, as practiced around the globe, is heterogenous. A group of Muslims in oil-rich Saudi Arabia have urged the worldwide adoption of a purist strand of Islam and advocate making it the sole basis of society and politics, a position creating tension and promoting extremism. Australian scholar of Islam, Riaz Hassan, says the only way to resolve this tension is to accept the existence of "culturally and religiously differentiated ummah" in different parts of the world. - YaleGlobal

How to create one Islamic community in a diverse world
Riaz Hassan
Thursday, April 17, 2003 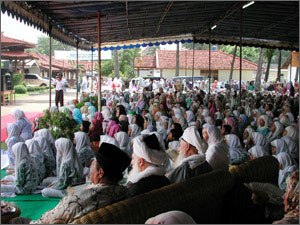 Muslims in Indonesia: One God, many colors.

NEW HAVEN: In the aftermath of the terrorist attacks of September 11, the effect of globalisation on Islam has emerged as a hotly debated topic. With twenty percent of the world's population professing Islam as their religion, it is a matter of more than academic interest. A survey of the evolution of Islam in recent decades shows that ummah - a universal community based on shared Islamic faith and implementation of its law - has indeed become a greater reality in an ever-shrinking world. At the same time, globalisation has also allowed divisive militancy to arise and flourish. In the years to come the force of globalisation may lead to the emergence of multiple centres of Islam rather than the current one based in Saudi Arabia Islamic historians have credited the concept of ummah as an important contributing factor in the rise and development of Islam and Islamic civilization. The evidence from various studies shows that although Muslims share a sense of being part of a global ummah, the intensity of this feeling varies significantly across Muslim countries.

This variation can be attributed to the broader reality of the Muslim world. Unlike in the past, when limitations of transport and communication technologies made it difficult for Muslims worldwide to acknowledge the cultural and social diversity of the ummah, the introduction of satellite television, internet, international travel, and access to books and magazines and increasing literacy is now making Muslims aware of their cultural and social diversity. The impact of colonialism and the emergence of nationalist movements, which spearheaded the struggle against it, have also served to fragment the Islamic world into over 45 Muslim countries with competing economic and political interests. Another consequence of this development for Muslims is that while they are becoming aware of the cultural diversity of the Muslim world the new technologies are also promoting a greater ummah consciousness, a heightened sense of belonging to a global community of believers.

In the pre-globalised world ummah consciousness was largely determined by the practice of the 'five pillars' of Islam (belief in Allah, payment of zakat (welfare tax for the poor), performance of hajj, daily prayers and fasting) and certain other key beliefs. The existence of these Islamic beliefs and practices was seen by many believers everywhere as evidence that the entire culture of the Muslim societies was Islamised, that is, had come to resemble the Arabian Islamic culture where Islam had originated. This transformation of all Islamised people was considered to be an integral part of Mohammad's social and religious mission. It was rather naively assumed by many Islamic intellectuals in the Middle East that such a cultural trajectory was the common destiny of all Islamised people. The difficulties of communication and contact with people in far-off regions fed this belief.

Globalisation is prompting a reformulation of the common Muslim belief that Islam is not only a religion but also a complete way of life, which in Islamic discourse is known as the 'one religion, one culture' paradigm. Instantaneous and worldwide communication links are now allowing Muslims and non-Muslims to experience the reality of different Islamic cultures. Such experiences reveal not only what is common among Muslims but also what is different. For example, gender relations and dress codes for Muslim women are structured in different ways in Muslim countries like Indonesia, Saudi Arabia, Turkey and Uzbekistan.

Similarly, there are vast differences in the religious practices of Abangan or syncretic Javanese Muslims and Wahabi Muslims (followers of the strict practice insisted by Mohammad ibn Abd al-Wahab) of Saudi Arabia and Pakistan. This realisation has provoked an unfavourable reaction among some groups of Islamic intellectuals towards this 'hybridity' (syncretic and heterogenous Islam). It has caused some radical Islamic movements to seek to replace 'hybridity' with the 'authentic' Islamic way of life. In Indonesia, the largest Muslim country, Islamic scholars like Azyumardi Azra have rejected the ideologies of radical Islamic organizations like Front Pembela Islam, Jamaat Muslimen Indonesia and Al Qaida because they see these organizations as advocating 'Arabic Islam'(authentic Islam) and rejecting the accommodative Indonesian Islam (hybrid Islam).

The struggle between 'hybridity' and 'authenticity' represents perhaps the most important challenge of globalisation for the Muslim ummah. It is one of the underlying causes of the emergence of Islamic fundamentalist movements. Fundamentalism refers to a strategy used by followers of Islamic 'purists' like Maududi, Syed Qutb and Ayatuallah Khomenei to assert their own construction of religious identity and Islamic social order as the exclusive basis for a re-created political and social order. They feel that Islamic religious identity is at risk and is being eroded by cultural and religious hybridity. They try to fortify their interpretations of religious ways of being through their selective retrieval and particular reading of Islamic doctrines and practices from a sacred past.

Modernity in its political and social forms refers to increasing specialisation of societal institutions like political systems, law, economic management, and education in isolation from religion. Unlike social life in the pre-modern era, in modernity these functions are carried out free from the overarching influence of religion. From this perspective, religious fundamentalism - in the sense of a return to a purist past - is a problem produced by the encounter between modernity and the Muslim ummah in all its diversity and cultural hybridity. Although the strength of fundamentalism varies according to the intensity of attitudes towards these features, it is clear that in a globalising world diversity and cultural crossovers will become a matter of routine. Instead of eliminating hybridity, this may in fact transform different Islamic countries and regions into autonomous cultural systems, thus posing a challenge to the conventional categorical oppositions of 'us' and 'them', 'Muslim' and 'others'.

This type of development would have far-reaching implications for the Muslim ummah. Islamic countries in different parts of the world could be transformed into unique religious and cultural systems, each claiming acceptance and recognition as authentic traditions of Islam. This transformation may lead to the 'decentering' of the Muslim world from its supposed cultural and religious centre in the Arabic Middle East to a multi-centered world. Five such centres of the Islamic world can already be identified, namely, Arabic Middle Eastern Islam, African Islam, Central Asian Islam, Southeast Asian Islam and the Islam of the Muslim minorities in the West.

A decentered Muslim ummah would confer a kind of legitimacy on the regional ummahs, and thus could lead them to chart their own social, political, economic, religious and cultural developments along distinctive lines suitable to the history and temperament of their people. This would engender new opportunities for the Muslim ummahs to again strive for the intellectual, cultural and material superiority that was achieved by the ummah in its formative centuries under the institution of the Islamic Caliphate. In such a scenario, the Islamic ummah would gain strength not as a unified and unitary community but as a differentiated community consisting of the regional ummahs all striving to gain material and ideological influences in a global system. These developments would also produce their own opposing and supporting movements requiring each ummah to find appropriate responses to them.

In a culturally and religiously differentiated ummah setting, it is possible that political and cultural leanings of one or some of the regional ummahs may not find approval with the governors of the holy centres of Mecca and Medina. This may pose difficulties for the members of these regional ummahs regarding free access to these centres to perform their religious duties. This in turn may necessitate the formulation of new and appropriate governing structures for Islam's holy centres of Mecca and Medina.

Muslims from different parts of the Islamic world are becoming interested in reforms to the management and governance of the holy centres by the government of Saudi Arabia. There is growing dissatisfaction with the current idiosyncratic policies of the Saudi government. Policies and practices such as barring adult single women unaccompanied by a male member of the immediate family and banning non-Muslims from visiting the Islamic holy places like Mecca and Medina are seen as inappropriate, anachronistic and unsuitable to the conditions of modern times. While these and similar issues which are likely to arise may initially pose difficulties, they may also be the harbingers of the new futures which await a differentiated Muslim ummah in the modernized and globalized world of the twenty-first century.

Riaz Hassan is Professor of Sociology at the Flinders University of South Australia and currently a visiting Professor in the Department of Sociology, Yale University. He is the author of Faithlines: Muslim Conceptions of Islam and Society (Oxford University Press 2002).