The Gordian Knot of Gaza

The internal politics for authoritarian Arab nations allied with the US complicate any resolution of the Israeli-Palestinian conflict and empower nations that resist Western influence, like Iran. The lack of power and miserable existence for Palestinians who seek their own state resonates with millions of Arabs, especially those who live in corrupt regimes allied with the US, Israel's major supporter, argues Brookings analyst Tamara Cofman Wittes. She maintains that the US cannot link up with regional allies on a handful of foreign-policy issues and expect to be spared the taint of association with corrupt, cruel or failed governance. Such partnerships only fuel extremist opposition to the regimes and their US ally. Any attempt to restart the Middle East peace process, Wittes argues, must “recognize the integral relationship between domestic and regional politics in today's Middle East” and address the legitimate concerns of Arabs who live in authoritarian states. The US must act quickly to demonstrate that connections encouraging moderation and peace offer far more opportunity than rigid systems that thrive on separation, resistance and violence. – YaleGlobal

The Gordian Knot of Gaza 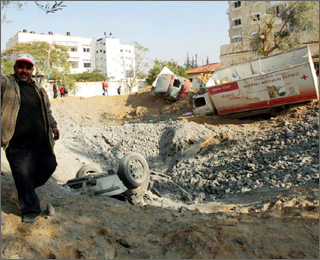 Eyeless in Gaza: Indiscriminate destruction of Gaza and the emotions it aroused have exposed a tangle of issues

WASHINGTON: The fire that raged in the Gaza Strip throughout January reversed a signal achievement of the Oslo peace process: that it had reduced the conflict from a regional conflagration to a series of bilateral arguments between Israel and its neighbors.

The new reality visible in the rubble of Gaza is a Gordian knot, tangling local and regional actors with external powers like the US. While the resumption of negotiations now pursued by the Obama administration is essential, the knot can be cut only with a comprehensive approach that addresses the broader Arab world and takes account of the regional interests at play in Palestine.

The Gaza war showed how the Arab-Israeli conflict today is increasingly subject to forces from well beyond its borders and how aspiring regional powers are once again using the Palestine issue as a platform from which to campaign for region-wide dominance. 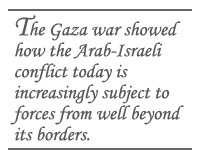 Primary among these aspirants, of course, is Iran. With Hamas’s forceful takeover of the Gaza Strip in June 2007, Iran – already emboldened by the removal of Saddam Hussein and the Taliban, and by the American quagmire in Iraq – seized the opportunity to expand its influence in the Arab-Israeli arena. With many Arab states cutting off support for Hamas, Iran emerged as the principal supplier of cash, weapons, and training.

As Iran flexed its regional muscles in Gaza, Lebanon and elsewhere, it helped crystallize a coalition of actors in the Middle East who are essentially revisionist in orientation: They do not like the current balance of power in the region nor the current influence of outsiders – especially the United States. They offer instead a vision of redemption through resistance, promising justice and dignity to Arabs humiliated by decades of defeat at the hands of the West and Israel, and decades of humiliation and neglect at the hands of their own governments. The revisionists include states like Iran and Syria and non-state actors like Hamas and Hezbollah. 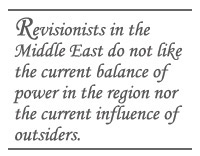 Against these revisionist actors is a looser coalition of status-quo actors – those who benefit from the current regional balance of power and are trying to preserve it. It is notable that today’s status-quo coalition, unlike any in the Middle East since 1948, includes all the major Arab states alongside Israel and the United States. To Arab leaders such as Egypt’s President Hosni Mubarak, Jordan’s King Abdullah II and Saudi Arabia’s King Abdullah – all close allies of the United States – the Iranian-led revisionist challenge deeply threatens both domestic and regional stability. These leaders, however, are at odds with majority of their population, less popular on the streets of their own cities than Hassan Nasrallah and Mahmoud Ahmadinejad.

These status-quo Arab actors are under assault for cowering under an American security umbrella, for making humiliating deals with Israel, and for ignoring and repressing the pleas of their own people. The assault comes both from the revisionist voices outside their borders and from the domestic Islamist opposition inside Egypt, Jordan and the other Arab status-quo states. Resentful publics now hear powerful external echoes for their long-held grievances – and they are responding in kind by echoing the revisionists’ demands. This balance of forces in the region had its coming-out party in the 2006 Lebanon War, and the Gaza war was one more skirmish in this regional war for influence. Thus, Saudi-owned Al-Arabiyya played up Hamas’s strategic error in baiting Israel, while Hezbollah’s Nasrallah jeered at Egypt for keeping its border with Gaza closed despite civilian suffering and called on Egyptians to overthrow their president.

The emergence of this Iranian-led revisionist bloc, and the pressures facing Arab governments from within and without, present a challenge for a new US administration struggling to stabilize Iraq and contain Iran. These goals require Arab cooperation, but it is hard for Arab governments to cooperate when their publics hark to Hezbollah’s radical rhetoric and see America’s very involvement in the region as harmful and illegitimate.

In today’s Middle Eastern environment, one can no longer draw a clear line between the domestic problems confronting Arab governments and the regional security problems that dog the United States and its regional allies. 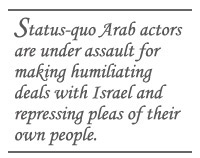 US-Arab cooperation cannot be reliably sustained in an environment where the Arab partners are tainted by unpopular American policies, while the United States is implicated by unpopular domestic policies in these states. Both reinforce the arguments of the regional revisionists.

The Obama administration’s urgent effort to renew Arab-Israeli peacemaking may be useful for public-relations purposes, to help repair America’s battered approval rating. Obama acted swiftly, though, not for the sake of feel-good diplomacy, but because a peace process is key to containing the revisionists, and especially Iran’s efforts to turn Palestine into a regional tinderbox. An active, viable Middle East peace process creates tensions and disagreements among members of the revisionist coalition, weakening their impact on the region and America’s regional allies. That’s why Obama will proceed with his plans for peace talks and for dialogue with Syria, even if Israel ends up with a right-wing government and Palestinians remain divided.

But to succeed in the Middle East, Obama must go beyond Arab-Israeli peacemaking and explain to the region, in a compelling way, what America is there for, beyond its own narrow interests. Countering the revisionists’ ideology of resistance requires a positive alternative vision of the future, one in which moderation, tolerance and peace provide more benefits and opportunities than “resistance” and violence. 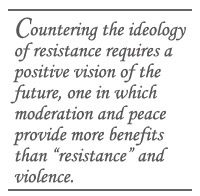 This suggests the need to promote Palestinian statehood, but also to present the vast majority of Arabs who live outside Palestine with the opportunity to shape their own future. And Obama can’t realistically set out a vision for a new American role in the Middle East without addressing the region’s governance failures – the corrupt and callous rule that affects 250 million Arab citizens every day, blocks their aspirations to build a better life for themselves and a better future for their children, and bends their ears to the revisionists’ siren song. Arab leaders feel keenly the threats from Islamists within their own societies and from revisionists outside their borders. They know that both these forces have capitalized on state failures and weaknesses. In this insecure environment, US efforts to persuade at least some Arab leaders of the need to reform should resonate – if it is part of a broader regional agenda and if accompanied by the right kind of incentives.

The Gaza crisis, and the geopolitical shifts it revealed, focused regional actors’ attention on the need to work harder to resolve conflicts like that between Israel and the Palestinians. As the United States embraces this trend, President Obama must also help Arab leaders understand that the best insulation against the rising regional storm is to promote greater freedom and opportunity, advance real accountability for Arab leaders, and so repair the frayed social contract between citizens and the state. To succeed, Obama must recognize the integral relationship between domestic and regional politics in today’s Middle East, and must present a policy vision that integrates them – one that works for peace, prosperity and progress for Arab citizens all across the region.

Tamara Cofman Wittes is a senior fellow in the Saban Center at Brookings and author of “Freedom’s Unsteady March: America’s Role in Building Arab Democracy.”