Although South Korea’s legislature just approved the deployment of 3000 troops to Iraq, South Koreans’ anger about US military actions has reached a boiling point, argues Sook-Jong Lee, a Visiting Fellow at the Brookings Institution. South Koreans have become increasingly critical of the US since the 1980s, with the presence of US forces in South Korea serving as a daily reminder of the country’s subservient role in the bilateral relationship. The death of two young Koreans struck by an American army vehicle as well as US forces’ abuse of Iraqi prisoners have increased public calls for a more independent South Korea. Many younger Koreans share a growing sense of nationalism that encompasses their North Korean neighbors, Lee adds, and are appalled by what they see as US military aggression towards that country. Although South Korea’s progressive political leaders have seized on anti-American sentiment to argue for a more independent foreign policy, Lee argues, the relationship is still salvageable. As a modern and Christian country that cherishes American material goods, South Korea is unlike Middle Eastern countries who also criticize the US. To maintain its interests in the region and resolve the current nuclear crisis with North Korea, Lee concludes, the US must reach out to the very South Koreans who remain so violently anti-American. – YaleGlobal 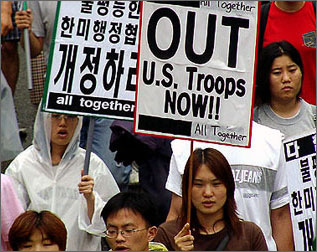 Be careful what you wish for: A third of American forces will be leaving South Korea.

WASHINGTON: Last October, South Korea’s liberal civic organizations began to protest more loudly as the South Korean government decided to dispatch more troops to Iraq to supplement the 670 engineering troops and medical workers sent over the previous spring. In spite of their protests, a plan to deploy 3,000 forces to Iraq was finally ratified by the National Assembly in February of this year.

Actual dispatch has been delayed as South Korean and American officials renegotiate the place to go within Iraq. Civic activists have rekindled their protests in the wake of the April 15th election, and are asking the newly composed National Assembly to reconsider its previous overwhelming approval of the military dispatch. Korean civic organizations say that South Korea should not sacrifice its young men for this immoral imperialist war, especially in light of recent prison abuse scandals. The massive wave of anti-American feelings that have accompanied recent US actions in Iraq and South Korea is unprecedented in Korean history, reflecting a growing popular resentment that could endanger the US-South Korea alliance. 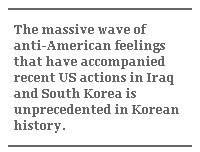 With the democratization of their society, South Koreans have become more sensitive about their relationship with the US, as evidenced by the reaction to a recent traffic accident involving US forces. Throughout the winter of 2002, tens of thousands of Koreans carrying candles assembled in Seoul’s downtown plaza every day. They gathered to mourn the two Korean schoolgirls fatally struck by an American armored vehicle the previous June, and to protest the subsequent acquittal of two involved American soldiers by a US Military Tribunal. The protests accompanied widespread public pressure to revise the bilateral military law that prevents Korean law enforcers from punishing most actions undertaken by American troops during their official duties.

Before the country emerged from authoritarian rule in the late 1980s, anti-American sentiments in South Korea were limited to radical students and leftist intellectuals angry at the US for supporting authoritarian regimes and facilitating economic disparities. Most Koreans became materially prosperous as the country democratized throughout the 1990’s, and old criticisms lost force. Instead, new grievances took hold in the minds of the populace.

Survey data suggests that South Koreans have been increasingly critical of the US since the 1980s, and that negative views have become more widespread since George W. Bush took office. An August 2002 poll by the Pew Research Center revealed that South Korea ranked eighth among the 44 countries surveyed in terms of unfavorable attitudes toward the U.S, with higher rates of disapproval than Indonesia and India. Only 53% of South Koreans had a favorable view of the US, while 44% were unfavorably inclined. 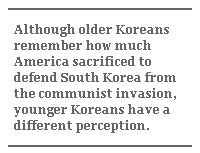 The current anti-American sentiment in South Korea has several sources. Most Koreans support the world-wide criticism of US unilateralism in foreign policy. They also resent the role the US plays in South Korea. The popular perception that South Korea has played only a minor role in the countries’ bilateral relations has begun to collide with South Koreans’ growing nationalism. The American Army headquarters in downtown Seoul reminds proud younger Koreans of a foreign occupation. Pollution and noise from army bases are viewed as an infringement of national sovereignty. Victimization of young girls and prostitutes inspires more resentment.

Many Koreans also see North Korea as less of a threat than in the past, causing them to question the need for deterrence help from US troops. Although older Koreans remember how much America sacrificed to defend South Korea from the communist invasion, younger Koreans have a different perception of security. The inter-Korean rapprochement and subsequent “sunshine” policy since the July 2000 meeting between President Kim and Kim Jong-Il planted the perception of North Korea as a poor brother to be helped by the rich South. A new inter-Korean nationalism advocating rapprochement and reunification is on the rise.

Even the current standoff over North Korea’s nuclear program has only strengthened South Koreans’ anti-American sentiments. South Koreans blame the Bush Administration for defining North Korea as one of an “axis of evil” and creating military tension in the Korean peninsular. Although American officials repeatedly deny any planned preemptive strike against the nuclear sites in North Korea, some Koreans view relocation of American troops away from the demilitarized zone as preparation to minimize US casualties in the case of war.

A significant number of South Koreans criticize the US for being preoccupied with its anti-terrorism and non-proliferation agendas without heeding its ally’s desire for peace. Having experienced the terrible Korean War, pacifism is strongly ingrained among South Koreans. For them, the assured ultimate victory of the combined forces of South Korea and the US in a war with North Korea is not preferable to the current status-quo if one considers civilian casualties in the hundreds of thousands. As the seeds of the Korea War were planted by the post-World War II division of the Korean peninsula by the US and the Soviet Union, many South Koreans also believe that inter-Korean rapprochement and reunification should be controlled by Koreans themselves – including those from the North.

South Korea’s progressive political leaders – who currently hold power – have taken up these anti-American sentiments and hopes for peaceful coexistence with North Korea. They advocate an independent foreign policy that diverges from Washington's confrontational approach to North Korea. But they must be alarmed by a recent US decision to move its troops in South Korea to Iraq and the subsequent US announcement to withdraw 12,500 US troops from South Korea. Anti-American sentiments are likely to dampen as most South Koreans are anxious to keep the remaining US troops. Korean progressives, meanwhile, face the dilemma that pursuing an equal partnership with the US would ultimately force South Korea to spend more money and personnel increasing its own defense capabilities.

South Korean public support for the US-Korea alliance itself is still strong despite growing anti-American sentiments. Nevertheless, American policy makers should act to abate the anti-Americanism in Korean society for two reasons. First of all, negative feelings towards the US among Korean civilians could harm the traditionally robust US-Korea alliance. Close cooperation and trust between Washington and Seoul is more necessary than ever if the current nuclear crisis is to be resolved. And as the US moves soldiers from South Korea to Iraq, it must prove its continued commitment to South Korea’s defense so that South Koreans feel confident about the alliance’s future.

Secondly, left unchecked, anti-US sentiment could transform domestic politics in South Korea. Inflated by South Korea’s currently unstable political scene, anti-American sentiment mixed with strong nationalism could empower political leaders who would create tension and create a chasm in the alliance. If an empowered progressive force in South Korea radicalizes its position towards the US, the divided Korean society is likely to be engulfed by chaos.

For the US, all hope is not lost. South Korean anti-American sentiments are less ideological or cultural than those found in other parts of the world. Unlike in the Middle East, negative feelings held by Koreans do not represent an outright rejection of all things American. South Korea is a highly Christianized country, unlike most of its Asian neighbors. Most of its intellectuals have heralded modernization as a means of catching up with the US. As long as American values and culture are emulated by many South Koreans, current anti-American sentiments are not irreversible.

Sook-Jong Lee is a Senior Research Fellow at the Sejong Institute of South Korea and a Visiting Fellow at the Brookings Institution until this June.

Of course South koreans hate everything about tye united states as South Korea is the completely same thing as North Korea.

An update of the above would be most welcomed. That is, after the recent US/NK declarations what impact has occurred in regard to any US pull out.

Wouldn’t it be interesting if the recent 2018 N Korea/US meeting had a predatory hidden agenda for N Korea to takeover S Korea? After looking at this 2004 article, I can see how the seeds for this kind of a move could have been planted decades ago.