Global trade is heavily dependent on shipping, with hundreds of port cities worldwide offering open doors to goods from other countries. Unfortunately, writes Michael Richardson, this same openness allows terrorists the possibility of bringing into the target country devastating means of attack – from high-explosives to radiological bombs, even nuclear devices. Al-Qaeda used a cargo vessel to transport explosives for its attacks on US embassies in Kenya and Tanzania. And with only about 5 percent of containers arriving in US ports screened with X-ray and gamma-ray devices, the potential for a major terrorist attack is quite high. As new security regulations come into effect in 2004, maintaining free trade at reasonable costs will be a challenge. Nonetheless, Richardson argues, bearing the cost of tighter security is far preferable to facing the repercussions of a major sea-borne terrorist attack. – YaleGlobal

How to protect ports while allowing global flow of trade is a new challenge
Michael Richardson
Friday, March 5, 2004 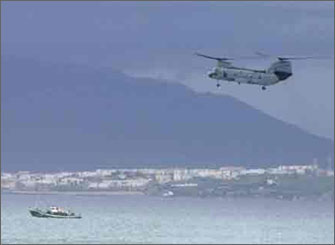 US Navy helicopter in the Horn of Africa: New task is to protect ports and sealanes from terrorist attacks.

SINGAPORE: What would happen to global trade if Al-Qaeda or one of its fanatical emulators successfully detonated a nuclear or radiological bomb in a major port-city? This is one of the nightmare scenarios for officials in the United States who warn that the next big attack on America could come by sea, not by air, and that it may involve chemical, biological, radiological or nuclear (CBRN) weapons.

Historically, shipping has played a pivotal role in world trade. Yet for all its global significance, the shipping industry is vast, poorly regulated, frequently beyond the reach of the law, and often secretive in its operations. Despite a raft of new maritime-based anti-terror legislation, the world's oceans and the shipping industry remain an attractive domain for terrorist operations.

The Al-Qaeda network has shown interest in exploiting the vital role of sea transport in the global supply chain. For example, in 1998 an Al-Qaeda cargo vessel carried explosives to Mombasa in Kenya not long before they were used in the bomb attacks on the US embassies in Kenya and Tanzania that killed over 220 people and injured more than 5,000. Al-Qaeda has used cargo containers to ferry agents and probably terrorist-related material around the world. According to court documents, shortly before his capture in Pakistan in March 2003, Al-Qaeda's director of global operations, Khalid Shaikh Mohammed, offered to invest US$200,000 in an export firm in exchange for access to the containers used by the firm to ship garments to Port Newark in the New York-New Jersey harbour complex.

Container security is of paramount importance in preventing maritime terrorist attacks on US territory. As many as 15 million containers are in circulation, criss-crossing the globe by sea and making over 230 million journeys through the world's ports each year. A mere 5.2% of the containers reaching American ports on ships are screened with X-ray and gamma-ray devices. This relative lack of security checks has raised fears that terrorists may conceal a radiological or nuclear bomb in a container and try to explode it in a key node for world trade.

The ultimate doomsday scenario would be the use of a CBRN weapon in a major global port-city with land links to the international supply chain. There are over 30 such ‘mega-ports', including New York, Los Angeles, London, Hong Kong, Singapore, Shanghai, Antwerp, Rotterdam and le Havre.

While there is no clear evidence that Al-Qaeda or any other terrorist group has acquired nuclear weapons, there is ample evidence that Al-Qaeda has tried to do so. Documents recovered from Afghanistan after the fall of the Taliban regime describe Al-Qaeda's nuclear ambitions. In the mid-1990s, Al-Qaeda agents tried repeatedly to purchase bomb-grade uranium in Africa, Europe and Russia. In November 2001, Osama bin Laden claimed that he had a nuclear bomb, but US intelligence officials dismissed his assertion. Experts say it would be difficult for terrorists to acquire enough plutonium or highly enriched uranium for a crude nuclear bomb. Morover, even if terrorist groups had the necessary fissile material, putting the infrastructure in place to build a usable bomb would probably take many years.

It would be easier, however, for terrorist bombmakers to assemble a radiological device – a ‘dirty' bomb – that uses conventional explosives to disperse deadly radioactive material. There are millions of radioactive sources that have been distributed worldwide over the past 50 years, with hundreds of thousands currently being used, stored and produced for civilian purposes. The International Atomic Energy Agency has warned that the radioactive substances needed to build dirty bombs can be found in almost any country in the world, and that more than 100 countries may have inadequate control and monitoring programs to prevent, or even detect, the theft of these materials.

Fortunately, building the most potent radiological bombs is much more difficult for terrorists than assembling explosives to disperse less toxic material. Not only are the very dangerous radioactive substances more difficult to obtain, the successful spreading of highly radioactive particles could only be done by a terrorist organization that had access to specialised scientific knowledge. But criminals are now trading in components and materials for dirty bombs. This makes it easier for terrorists to acquire powerful radiological sources. Indeed, scientists at the Los Alamos National Laboratory in the US have concluded that a dirty bomb attack "somewhere in the world is overdue."

No such attacks have been recorded. But in January 2003, the British Broadcasting Corporation (BBC) reported that Al-Qaeda had tied to assemble radioactive material to construct a dirty bomb in the Afghan city of Herat before the US-led invasion of Afghanistan in October 2001. No dirty bomb was found, but British intelligence officials were convinced that Al-Qaeda had the expertise to build another one, based on terrorist training manuals detailing the deployment of a radiological weapon to achieve maximum destructive effect. 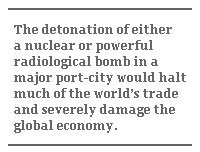 The detonation of either a nuclear or powerful radiological bomb in a major port-city would cut the arteries of maritime commerce if the device was believed to have come by sea. It would halt much of the world's trade and severely damage the global economy, as governments scrambled to put extra security measures in place to protect their populations, cities and economies.

A major sea-borne terror attack would also send marine insurance rates to prohibitively high levels. After terrorists used a small boat packed with explosives to set the French oil tanker Limburg ablaze off the Yemeni coast in 2002, underwriters tripled premiums on ships calling at ports in Yemen. The exorbitant cost of insurance forced many vessels to cut Yemen from their schedules or divert to ports in neighbouring states. A CBRN attack on a major international port would send ship and cargo premiums skyrocketing. The bigger the attack up the scale of terrorist violence, the greater the insurance shock would be.

A nuclear bomb could cause hundreds of thousands of casualties. But any serious CBRN attack from the sea would be followed by ramped-up security measures that would disrupt world trade. Such measures would include lengthy cargo inspections in the ports of the affected country, as well as in ports of nations that did extensive sea trade with it, or even the complete closure of ports for an indefinite period, while additional checks and safeguards were applied to allay public fears. One of the first things the US government did after the 9/11 attacks, for example, was to shut down US commercial aviation for four days – a security measure that had severe repercussions on aviation, travel, tourism, and business around the world, as hundreds of scheduled flights were cancelled or diverted. The Bush administration also closed US ports for two days.

A catastrophic terrorist attack from the sea would be particularly damaging because the global economy is built on integrated supply chains that feed components and other materials to industry on a 'just enough, just in time' basis. Disruption of this supply chain would have repercussions around the world and profoundly affect business confidence. Yet the global economy will also suffer if well-meaning security measures slow trade and make it more costly. Striking the right balance between free trade and security is critically important, and it must be done in 2004 as a wide range of new counter-terrorist measures for ships and ports take effect.

Michael Richardson, a former Asia editor of the International Herald Tribune, is a visiting senior research fellow at the Institute of Southeast Asian Studies in Singapore. His full report, “A Time Bomb for Global Trade: Maritime-related Terrorism in an Age of Weapons of Mass Destruction,” is available here .