The H1N1 Virus: Varied Local Responses to a Global Spread

This past spring, some of the responses to the H1N1 virus, known as the Swine Flu, were surprisingly reminiscent of the SARS epidemic from 2003. That is, some authorities imposed travel restrictions and quarantines to halt the advance of the virus. But as Director of the Center for Global Health Studies at Seton Hall University Yanzhong Huang argues, such methods are a direct contradiction of a WHO study that found travel restrictions did not delay the transmission of SARS. Indeed, that the H1N1 virus can be communicated without the individual manifesting symptoms and that the virus travels much quicker than SARS are further evidence that quarantines and travel restrictions are ineffective. Moreover, employing such inefficient methods squanders public health resources. As autumn – and the outset of flu season – approaches in the Northern hemisphere, monitoring responses to new cases of the H1N1 virus becomes critical, particularly if the aforementioned methods of containment find wider use. The effects on the global economy – still in a vulnerable state – could be deleterious. Additionally, the misallocation of resources could prove harmful both to governments, struggling to implement stimulus programs, and to individuals, as money is spent on political agendas – maintaining the illusion of control and stability – rather than public health ones. At this stage, it would appear that while pandemics are firmly part of the globalized era, governmental responses to the spread of disease are not. – YaleGlobal

The H1N1 Virus: Varied Local Responses to a Global Spread

Pandemics are global but political calculation to confront them is decidedly local
Yanzhong Huang
Tuesday, September 1, 2009

NEW YORK: Apart from killing at least 2,185 people worldwide, the H1N1 virus – popularly known as the Swine Flu – has sown great confusion and more than normal uncertainty about the future. Despite declaring that the flu has become a pandemic – meaning a global threat – the World Health Organization has advised against travel restrictions. More bizarrely, China which once earned the WHO’s opprobrium for its secretive and lackadaisical approach during the SARS crisis, is now ignoring the world body’s advice to set up stringent travel barriers. Is China right and what can be done to prevent further havoc by the virus are the questions that occupy health officials and the public world over. An answer to the last question may not be known until autumn comes to the Northern hemisphere. At this point, the Chinese approach seems to have had more impact on the country’s political life, than on the health of its citizens.

On May 1, even though no single confirmed case was found, the government suspended direct flights from Mexico to Shanghai. For more than two months, it was the only country conducting on-board temperature checks and quarantining groups of passengers. By early July, China had thrown tens of thousands people – including foreign school children on summer vacation – into government designated facilities. 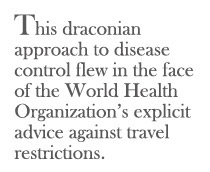 This draconian approach to disease control flew in the face of the World Health Organization’s explicit advice against travel restrictions. Since both exit screening and travel bans were recommended by the same organization during the 2003 SARS epidemic, the new WHO advice has drawn sharp criticism from some of Asia’s leading scientists. In crediting travel restrictions with containing the spread of SARS, the critics nonetheless forgot a 2004 WHO study which showed that travel restrictions did not delay transmission of SARS. The influenza virus poses a particular challenge for border screening: unlike SARS, it can be transmitted by carriers without any outward symptoms. The influenza virus is much more infectious, and moves too fast to be contained in the same way as SARS. No wonder that less than a third of the cases in China were identified through stringent border screening measures.

Quarantine measures heavily used in the SARS outbreak, were instituted by countries such as China in handling the threat of H1N1 as if they were a silver bullet for all infectious diseases. Quarantine (which is derived from the Italian “quarantina” or about forty in recognition of the number days of isolation imposed by the City of Venice during the Bubonic Plague of the 14th century) proved futile to stop the spread of the 1918 Spanish Flu even when vigorously enforced in military units. The same holds true in the 2009 H1N1 flu pandemic. By June 18 (the date of the most recent epidemiological data available), only 23 confirmed cases in China were identified through involuntary quarantine. 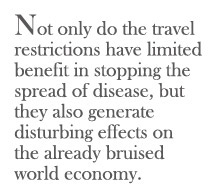 Not only do the travel restrictions and quarantine measures have limited benefit in stopping the spread of disease, but they also generate disturbing effects on the already bruised world economy, affecting travel and trade, dissuading the very kind of transparency and openness essential for a global response to disease outbreaks. Mexico, which like China imposed drastic social distancing measures, incurred the cost of $2.3 billion in the first week after the outbreak. Draconian and intrusive pandemic control may also undermine a country’s surveillance capacity – people who show symptoms might choose to shun public health authorities for fear of quarantine or stigmatization. Worse, these measures squandered limited health resources reserved for more severely virulent microbes. As Laurie Garrett of the Council on Foreign Relations has noted, by July signs of fatigue and resource depletion had already set in most of the world.

Paradoxically, despite the proved ineffectiveness of containment measures, a number of countries were hesitant to switch to a mitigation-oriented strategy. For countries that are still gripped by the memories of SARS, the aggressive response might be understandable. But unlike SARS, the H1N1 virus is a relatively benign virus. Its virulence is close to that of the routine seasonal influenza, and well below that of the dreaded 1918 pandemic virus and SARS. Its transmissibility is comparable to the seasonal influenza and the 1918 pandemic flu, but not as terrifying as SARS. 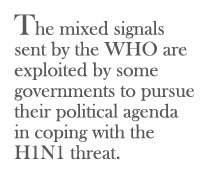 That being said, it is precisely the mildness of the H1N1 virus that poses one of the biggest challenges to global pandemic planning and control. Due to the high fatality rate of H5N1 – once considered the most likely candidate for the next flu pandemic, the WHO pandemic alert system focuses on the geographic spread of the pandemic flu. A full-fledged pandemic (“Phase 6”) can be announced provided there is evidence of sustained human-to-human transmission in two separate parts of the planet simultaneously. The rapid spread of a low virulent H1N1 (instead of a highly lethal H5N1) in 2009 thus lays bare the loophole of the WHO pandemic alert system. Within one week, the WHO alert level was raised to Phase 5, suggesting a pandemic was “imminent.” By May 8, the criteria for moving to the highest alert level had already been met, although the organization did not announce a full-blown pandemic until June 11.

The mixed signals sent by the WHO are exploited by some governments to pursue their political agenda in coping with the H1N1 threat. The Chinese government referenced several times the support of the WHO in justifying its excessive response toward the outbreak. In the eyes of Chinese leaders, the failure to tell the difference between SARS and H1N1 is not as important as demonstrating to its citizens and the world of a caring government fully in charge. In months leading up to the celebration of the People’s Republic’s 60th anniversary, forceful government action against H1N1 was shown to have helped shore up its legitimacy: a survey conducted by the China Youth Daily found that 85 percent of the Chinese supported the draconian government measures. As Caijing, a leading magazine published in China, noted, the cost borne by public health personnel, H1N1 patients and those who had close contact with them were secondary when it came to the issue of social and economic stability. 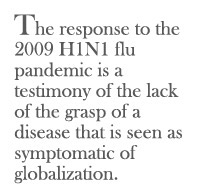 The response to the 2009 H1N1 flu pandemic is a testimony of the lack of the grasp of a disease that is seen as symptomatic of globalization. Despite the conventional wisdom that viruses do not need a passport to travel across the planet, some countries still look to a centuries-old approach to “contain” the rapid spread of H1N1. As the flu season approaches in the Northern hemisphere, scientists are trying to figure out how the H1N1 virus will behave. Sadly and ironically, the WHO can avoid the charge of crying wolf only with the arrival of a more severe second surge causing billions of cases and many more deaths than the seasonal influenza. The assumptions of this forecast nonetheless are based on a single pandemic 80 years ago, when laboratory and epidemiological capacity was extremely limited and effective treatment was not available. The ability of science to drive interventions against public health threats is further compromised as health is transformed from a humanitarian, technical “low politics” issue to one that features prominently on the political agenda. In short, policy makers need to update their thinking about the threats of diseases and the strategies aimed at their solution in a globalized era.

Yanzhong Huang is Associate Professor and Director of the Center for Global Health Studies, John C. Whitehead School of Diplomacy and International Relations at Seton Hall University, and editor of Global Health Governance: A Scholarly Journal for the New Health Security Paradigm.
Copyright © 2009 Yale Center for the Study of Globalization