As Japan confronts challenges of a low birth rate, an aging population, and a shrinking labor pool, Sharon Noguchi describes the country’s newfound reliance on illegal workers who are employed in low-wage jobs and unprotected from exploitation. Immigrants from China, Latin America and South Asia seek jobs with employers willing to risk legal punishments in order to hire workers at lower wages. Illegal workers are willing to accept bottom-rung pay, risking arrest and finding it difficult to claim all the wages they are owed. Some unions agree to represent illegal migrant workers, yet the country as a whole does little to welcome the laborers it desperately needs. Despite a lack of official policy, Japan continues to draw workers through unspoken promises of steady work and the hope of a better life. – YaleGlobal 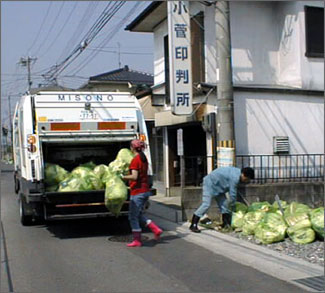 TOKYO: A ski cap pulled low to conceal her wavy brown hair, Luz Martinez stands near Kawasaki Station, hoping to avoid any appearance of loitering in the busy terminal regularly staked out by Japanese immigration officials.

After 11 years of illegal work in low-paid jobs, Martinez has become adept at blending in with the crowd. She is one of an estimated 220,000 illegal migrants who live in Japan, most of them workers from China, Southeast Asia, South Asia and Latin America.

She was fired from her last job, packing fruit for a Dole Japan affiliate. After 16 months, she took a sick day and was told not to show up again.

Martinez (which is not her real name) and her fellow foreign laborers experience the flip side of the polite, safe Japan that Western tourists and foreign business people encounter. Japanese society extends little protection from exploitation for powerless illegal immigrants.

Their numbers will undoubtedly swell now that Japan’s birthrate has sunk to 1.29 children per woman, well below the replacement level. In 2005, Japan’s population dropped for the first time since the government began keeping records in 1899, a year ahead of projections; births fell 4.2 percent and deaths increased 5.4 percent. With the population beginning an accelerating decline, factories need assembly-line hands, retirement schemes seek contributors, and producers want consumers.

The government does not issue visas for manual laborers or for immigrants. For decades, Japan had been one of the few countries to industrialize without drawing on immigrant labor, relying instead on rural residents and women. But during the bubble economy of the late 1980s, an acute labor shortage prompted Tokyo to grant long-term visas to Japanese descendants abroad, up to the third generation. The assumption was that such immigrants would easily fit into Japanese society, more so than other foreigners. 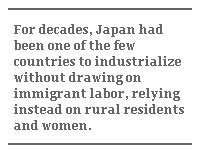 Today, more than 350,000 Latin Americans, most of them ethnic Japanese, live with their families in Japan. These legal immigrants do the so-called “3D work,” the dirty, dangerous and difficult jobs shunned by middle-class Japanese. They are joined by illegal immigrants, foreign students, and trainees—primarily Asians ostensibly in Japan to learn skills to use back home, but who in reality supply docile low-wage labor.

About 1.9 million foreigners are registered in Japan. Combined with illegal entries, non-Japanese make up 1.5 percent of Japan’s population, a tiny proportion compared to immigrant populations in Europe and North America. The challenges so familiar to officials in the US, Europe and Australia are thus relatively new in Japan.

Official policy has not come to terms with the labor deficit, and without government action, employers will meet the growing demand for workers with illegal immigrants. Business voices, such as the Keidanren (Japan Business Federation) and Toyota Chairman Hiroshi Okuda, have called for importing foreign labor. Prime Minister Junichiro Koizumi and legislators must decide whether to open the gates to mass immigration or prepare for a markedly shrunken economy. Yet recent central government initiatives focus on controlling or expelling those foreigners already here. In June, to better monitor foreign residents, officials announced a plan that could require them to carry IC chip identification.

Those workers without visas keep a low profile. “We stay to ourselves,” said U Sein, the pseudonym adopted by a Burmese asylum seeker in an interview a year ago. “Outside, I don’t talk.” Several months later he was apprehended and thrown in immigration jail.

Globally, the human flow from rural to urban areas, from developing to industrialized countries continues to surge, defying police barriers, jail and laws. In Japan, the influx is about to balloon, with a ready supply of laborers from China. Desperation drives most illegal workers. Some, like Sein, have fled repressive governments. Most left crumbling economies and seek a way to support families back home. Many, like Martinez, enter on short-term visas. As Japan has eased visa requirements for some neighboring countries, Asians slip in on false third-country passports. In November police announced that they had discovered 200 foreigners with fake passports, many forged in China.

Once in Japan, illegal immigrants face further barriers. Martinez, from Lima, Peru, was promised a “good job” in Japan by a friend of a friend. Although she had paid a broker $1,000, that job never materialized. With persistence, she found work packing frozen fish in Nagoya.

Because companies avoid employing them as regular employees, illegal migrants reap few benefits. Though in theory labor laws protect everyone, illegal foreigners have little leverage against low wages, long hours, grueling conditions and paying kickbacks – legal or not. It’s not unusual, for instance, for factory workers to flip-flop weeks between night and day shifts, or for employers to require workers to put in unpaid overtime. Hours and assignments shift suddenly when demand slackens or surges.

Martinez has held 13 jobs in 11 years here, but never with health insurance. She pays her own medical expenses – even after she scalded her hand in a vat of broth at a soup plant and after stomach and back pain immobilized her at a tile-painting factory where workers wore no masks.

After she was fired from packing fruit, she checked for her withholding refund. The company still owed her about 220,000 yen, or $1,000, she said, in withholding tax because she had not earned the taxable minimum. “But there was no form in the envelope, and when I asked the contractor, ‘Where is the tax refund?’ he pretended to be surprised and said, ‘The factory didn’t include it?’”

Martinez, a streetwise woman, saw an ad by Kanagawa City Union, one of the few unions that span industries and companies to represent foreign workers. Yet union power is limited, as is migrants’ assertiveness, and the vast majority of illegal workers are not unionized. Angry, she considered filing a claim to recoup her money, but backed off when a union adviser warned that her former employer could report her to immigration officials. She calls such contractors and companies “unscrupulous thieves.” Like other foreign laborers, she has quietly endured humiliation and intimidation: “The psychological abuse is worse than the physical hardship,” she said.

Some union activists believe Tokyo tolerates illegal immigrants at the behest of industry, to suppress wages. Immigrant advocates suggest that Japan can ease its labor shortage simply by legalizing illegal immigrants, allowing workers already acclimated to the country to surface legally. But Japan shows no interest in granting any amnesty. Police and immigration authorities stage raids at train stations and sweep neighborhoods like Tokyo’s Kabukicho, where immigrants cluster. In the public’s eye, illegal immigrants are criminals.

Martinez rejects this categorization. “We abide by the law. But what about their compatriots, who break the law and abuse all of us here? What do they want, for us to disappear? Then what would they do? They don’t want to do this kind of work.”

The plight of hidden toilers in Japan’s growth engine like Martinez not only throws light on the dark side of globalization but also shows the Achilles’ heel of Japan’s economy. Faced with the reality of a declining working population and a growing need to care for the elderly, Japan carries its underhanded solution to the problems at its own peril.

Sharon Noguchi is a staff writer with the San Jose Mercury News in California. From fall 2004 to spring 2005, she received a Fulbright fellowship to research immigrant worker communities in Japan. She can be contacted at snoguchi@earthlink.net.