Productivity growth is slowing down in the United States, part of a global trend, reports Noah Smith for Bloomberg. Comparing how much workers produce across countries is difficult because of variances in data reporting. Economists have long credited technological and organizational changes for rising productivity, but Smith suggests reduced globalization may also be a factor. “From 1993 to 2008, trade became more and more important to the world economy,” he writes. “This rapid globalization was the result of confluence of factors – innovations such as containerized shipping and the internet, as well as political developments like the end of the Cold War and a drop in the use of protectionist policies.” Research suggests that globalization boosts efficiency, competition, specialization while helping spread new technologies. Smith warns that the China-US trade war, a shifting supply chain, reduced foreign investment and rising protectionism could usher in an era of economic stagnation. – YaleGlobal

Read the article from Bloomberg about declining productivity growth in the US.

Noah Smith is a Bloomberg Opinion columnist. He was an assistant professor of finance at Stony Brook University, and he blogs at Noahpinion. 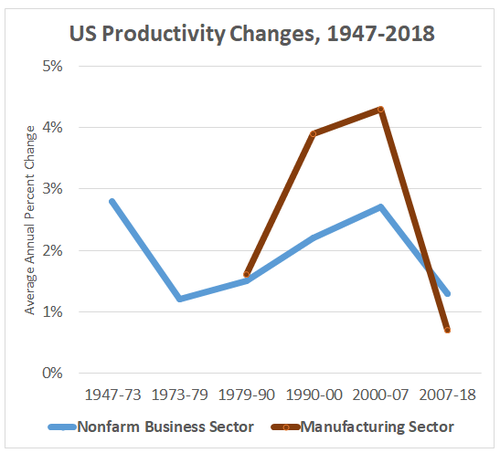 (Source: US Bureau of Labor Statistics)

Booming US Growth in Question