HIV/AIDS: A Truly Global Response Needed For a Global Scourge

Two years after its first appearance in 1981, the AIDS virus had spread to 60 countries. It rapidly became a global epidemic that clearly required a global response. Organizing such a response, however, has proved to be difficult. The first fifteen years of the global struggle against AIDS were marred by low funding, political infighting and controversy over prevention methods. The new millennium has brought a slate of new funding initiatives, increasing many-fold the resources available to expand AIDS treatment and HIV prevention to developing countries hard-hit by the epidemic. However, two goals must be achieved before this great potential can be actualized. First, the long-standing power struggle over coordination of the global campaign must subside with the emergence of a unitary strategy and will. Second, a global consensus around proven prevention methods must arise. A truly global response has not yet been achieved, but it is not too late. – YaleGlobal

HIV/AIDS: A Truly Global Response Needed For a Global Scourge

Power struggle over coordination of the global campaign must be ended to develop a unified strategy
Michael Merson
Tuesday, November 29, 2005 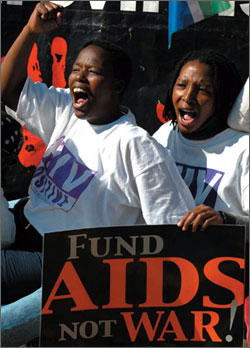 Cry of despair from Africa: South African activists call on the world to help fight HIV/AIDS

NEW HAVEN: The biggest global scourge of our time, AIDS, appeared quietly in 1981. But two years after it was first identified, the disease had been reported by 60 countries. Since then it has spread worldwide. An unprecedented epidemic in Africa has halved life expectancy in some southern African countries, the Caribbean region has been the second-hardest hit, and nascent epidemics in Asia and Eastern Europe now threaten to explode. To date, over 25 million people have died. Clearly, such a global crisis demands a truly global response, to meld the resources, political power, and technical capacity of wealthy nations with the needs and local expertise of hard-hit developing countries.

Yet, from the outset, the same obstacles have fractured and weakened the effectiveness of global efforts to combat the pandemic. The fact that the Human Immunodeficiency Virus (HIV), the cause of AIDS, is predominantly transmitted sexually injects controversy and moral politics into the global debate over HIV prevention and has been an impediment to action. In addition, institutional infighting, alongside reluctant political leadership, has hampered the emergence of a coordinated response.

It was not until 1987, six years into the pandemic, that the World Health Organization (WHO), the UN agency responsible for global health, responded to the reality that millions of people had been infected with HIV on all continents. As the late Jonathan Mann, the director of WHO's new Global Program on AIDS (GPA) testified to the US Congress that year, there was "no alternative to considering AIDS as a global crisis." GPA was intended to lead such a global response.

GPA successfully mobilized national responses, initiated needed research and became a voice for those living with AIDS. But it soon was plagued by conflict with other bodies in the UN system. These rivalries, as well as concerns over WHO's senior leadership, and an increasing preference by wealthy governments for bilateral programs in the face of declining foreign aid budgets and for UN reform after the Cold War, led to calls for a more multi-sectoral response. Accordingly, the decision was made in 1996 to disband GPA and replace it with a unique apparatus, a Joint United Nations Program on AIDS or UNAIDS, to coordinate AIDS-targeted programming across the United Nations system (including the World Bank).

This same year, researchers announced a new therapy to prolong the lives of people with AIDS. While this highly-active antiretroviral therapy (HAART) promptly saved millions of lives in developed countries, it underscored the inequities of access to essential drugs. The new cocktail cost over US$10,000 per patient per year – a price affordable to few in developing countries. AIDS death rates continued to rise in sub-Saharan Africa. At the same time, the new UNAIDS found its task of leading a coordinated response difficult, as its resources were constrained and resolving conflicts among the UN partners proved difficult. National-level AIDS control programs, having built partnerships with the GPA, found it disruptive to have these severed. Wealthy nations, increasingly disenchanted with the UN system and facing less in the way of AIDS mortality, seemed more and more disengaged from the pandemic, despite its increasing devastating impact on resource-poor countries.

Around the turn of the millennium, several key changes caused these same nations to be newly receptive to UNAIDS advocacy. First, the significant spread of HIV into Russia, China, and India in a post-9/11 environment prompted concern that AIDS could destabilize global political and economic systems. Secondly, as AIDS treatment became the norm in developed countries, agitation by international NGOs led to generic production of antiretroviral drugs at greatly reduced prices. Brazil showed the way in demonstrating how use of these drugs could dramatically reduce AIDS mortality and hospitalization in a developing country setting. Thirdly, politically powerful faith communities, particularly in the United States, long reluctant to support condom distribution and other prevention programs steeped in sexuality, embraced the need for global treatment, particularly for children. Lastly, millions of persons saw the impact of the pandemic on their television screens during the summer of 2000, when the international AIDS conference was held for the first time in a developing nation (South Africa).

The first new major funding initiative came in 2002 with the foundation of the Global Fund to Fight AIDS, Malaria, and Tuberculosis, proposed by UN Secretary-General Kofi Annan. Just 13 months later, President Bush announced the President's Emergency Plan for AIDS Relief (PEPFAR), a five-year, a US $15 billion program focused on 15 countries with 80 percent of AIDS cases. The World Bank also dramatically stepped up AIDS funding through its Multi-Country HIV/AIDS Program, as did the World Health Organization by its launching in 2005 of its "Three by Five" initiative (three million persons on HAART by 2005). In 2005 alone, US $8 billion dollars will have been spent on global AIDS, around 30 times the amount spent ten years ago, at the foundation of UNAIDS.

The most obvious impact of this funding has been in the arena of treatment. Due to a combination of generic drugs entering onto some markets and deals brokered between hard-hit countries and pharmaceutical companies, the price of a year's therapy has decreased to hundreds of dollars, allowing treatment programs to expand faster than was previously imagined. However there is a long way to go, particularly in strengthening national health systems to provide these drugs. Across developing countries, only 15 percent of the estimated treatment need has been met, and the WHO 2005 goal will be far from achieved. And if treatment is a relative strong point in the new funding environment, the long-standing controversies around prevention remain unresolved. For example, there has been much tension over the efficacy of condoms versus abstinence in programs funded by PEPFAR. Until this and other such controversies are resolved and there is a common commitment to proven prevention methods, the global response will be compromised.

Poor donor coordination, a long-standing impediment to a global AIDS response, is an issue that new funds alone will not solve. In fact, more funds may make it worse. The Global Fund and PEPFAR stand in a complicated relation, with overlapping goals and funding sources. Countries find themselves caught in the middle. Harmony must be achieved between all stakeholders in the global response if progress is truly to be made. In April of last year, UNAIDS, the United States and the United Kingdom hosted a stakeholders meeting which agreed to "The Three Ones" principles – one agreed national action framework, one AIDS national coordinating authority, and one national monitoring and evaluation plan – intended to harmonize the various global AIDS institutions. This effort can only succeed with the sustained support of all involved.

While these obstacles are significant, the global community stands a better chance than ever of overcoming them. Never before has this level of funding been achieved. Never before have major world leaders focused so intensely on a global health problem. The challenge now is for all players – including recipient nations – to consciously surmount the historical obstacles to a unified AIDS response. Only then will real progress be made in addressing this disease that threatens to kill 60 million more people in the next 15 years.