More than 6,000 people have been arrested for protesting in Hong Kong. That number could climb as authorities review surveillance recordings. The protests began in June over a bill allowing extradition of accused to China. “The early demonstrations were legally-approved marches, however, almost everyone who has attended protests in recent months has been at an event deemed unlawful,” reports CNN. “The number of people potentially eligible for arrest could number in the hundreds of thousands.” Some protests turned violent, though the city’s crime rate is otherwise low. The battle over democracy could criminalize an entire generation, jeopardizing education and career prospects. The CNN report describes Hong Kong’s education system as “hyper-competitive,” with many youth dedicating long hours to education. “In theory, the generation born after the 1997 handover, who never knew life in a British colony, should have been the most Chinese yet,” the report concludes. “But any chance of building a new generation of Communist Party-style patriots was undermined by the failure of the Chinese government to deliver on promises made around the handover regarding greater democracy for Hong Kong.” Beijing could end Hong Kong's special privileges in 2047. – YaleGlobal

Six months of protests may have changed Hong Kong, with trust eroded between China and many residents, especially the young
James Griffiths and Jessie Yeung
Tuesday, December 24, 2019

Read the article from CNN about the many protesters in Hong Kong who could be facing arrest. 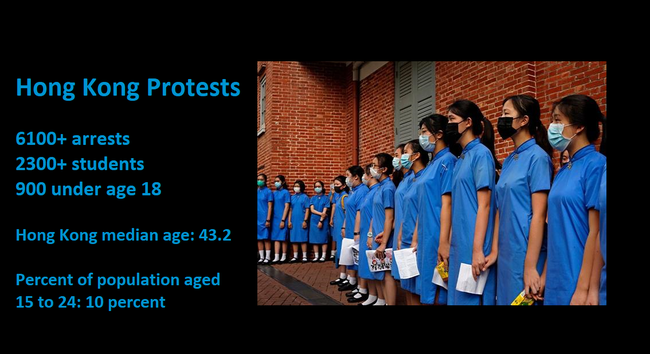 Why the Hong Kong Protests Have Gone Global