How Dangerous is the Bird Flu?

In recent weeks the avian flu has emerged as a matter of urgent concern for poultry farmers, health officials, and government leaders in Asian countries. Cases of infected poultry have been reported in China, Vietnam, Thailand, and seven other countries, with widespread culling and bans on chicken exports in many of these. But with fewer than twenty human deaths reported thus far, is this something the broader global public should be concerned about? It most definitely is, says Pulitzer-prize winning science journalist Laurie Garrett. In this 'Q &A' article, Garrett explains the origins of the bird flu, how humans could become infected, and why human-to-human transmission could present the entire world with a disastrous public health problem. - YaleGlobal

How Dangerous is the Bird Flu? 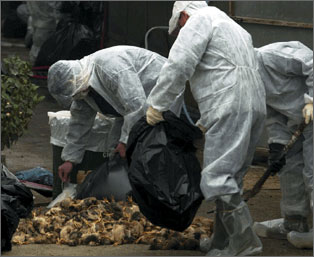 NEW YORK: As avian influenza spreads through poultry flocks across Asia, and the Thai government undergoes a shake-up amid allegations of an epidemic cover-up, scientists are trying to determine just how dangerous this new flu virus is for human beings. While it is clearly lethal for most infected domestic chickens and ducks, fewer than twenty cases in people have been laboratory confirmed. And there is so far no evidence that the virus can spread from one person to another.

QUESTION: How do birds catch the flu?

ANSWER: Influenzas of all kinds are normally harmless viruses carried by aquatic migratory birds. Normal strains do not hurt the migratory birds (such as ducks and geese), but can multiply inside the animals and be passed in the fowls' feces and urine. Other species of land-bound and domestic birds catch the viruses from the migratory birds via their feces or urine. Typically this happens in rural areas where the migratory birds may land and try to steal food or water from domestic animals on small family farms. Though the viruses are usually harmless to the migratory birds, they can be extremely dangerous to domestic animals, such as chickens, geese, and ducks. That appears to be the case this year with the strain of avian influenza that is circulating in Asia. Chickens do have a primitive immune system and make antibodies, but those protections appear to be inadequate when the animals are faced with a virulent form of influenza like this latest avian flu virus.

QUESTION: Current evidence indicates this avian flu, as well as nearly all other influenza viruses that spread among people, originated in China. Why?

ANSWER: These avian viruses have opportunities to mutate and become lethal to human beings that are almost entirely based in the Chinese ecology. Almost all new influenza strains originate in China. This has probably been true for more than 4,000 years. The reason has to do with the style of Chinese agriculture and the special prestige poor farmers give to possessing pigs and ducks. Farms in China tend to be small scale family operations, packed densely, one abutting another across vast spans of the nation of 1.3 billion people. The farm animals are usually housed together, and may roam during the day inside a small, shared corral or pen area. Both ducks and swine are aggressive species, and typically fight over their tiny parcels of penned turf. When the ducks get influenza from the migratory birds, they may pass the virus onto these pigs. In turn, the pigs serve as what is called a "viral mixing vessel", wherein the influenza viruses attain their abilities to infect other mammals, including human beings. Pigs carry genetic factors that actually help the flu virus mutate into a mammalian form that can then be passed on to humans. A new study published this week in SCIENCE shows that the 1918 influenza pandemic strain was made of a constellation of chromosomes different from the avian flu now circulating. That is the good news. The bad news is that the 1918 type of influenza needed to mutate only a handful of RNA nucleotides to take on a humanly contagious form. Nobody knows just how much the currently circulating avian flu would have to change its chromosomes to attain a similarly profound contagion capacity.

QUESTION: The World Health Organization says that the risk of a dangerous new pandemic in people is greater than usual this year because normal flu and avian flu are spreading at the same time. If the virus were to mutate, what would be the worst case scenario for human-to-human transmission?

ANSWER: If such a horrible thing were to occur, the danger would be grave. There are many reasons why scientists have long said the worst plague humanity could face would be a modern version of the 1918 flu phenomenon. A couple of reasons:

a) In 1918 the aquatic bird flu seems to have made its way somehow to Kansas, where it spread quickly among US Cavalry horses and then the soldiers. Those troops were shipped to Europe to fight in WWI, many of them arriving in the throes of lethal infection. In just 18 months, flu claimed an estimated 40 to 50 million lives. The greatest tolls were in densely populated urban areas. In those days even London was a comparatively small city, with just over a million residents - today we have 26 mega-cities in the world, each with populations over 10 million. And, of course, today we have jet travel, allowing flu strains to circumnavigate the planet in a matter of days.

b) Vaccines can only be made on chicken eggs at this time, though there is ongoing research on other possibilities. In 1995 the US National Institutes of Health and the WHO convened a meeting in Washington to figure out what would happen in a 1918-style pandemic. Even if it were possible to spot a new virus and make seed stock for vaccine production in a swift manner (which is underway now for the avian virus), it takes six months, the meeting concluded, to produce millions of doses. If that production occurs in ideal haste at pharmaceutical plants all over the world it would still be impossible to make enough doses to protect more than a small percentage of the world's population. This is because there are only so many live chicken eggs sitting in incubators under sterile conditions worldwide. Even in non-pandemic years the US now suffers shortages and delays in vaccine delivery. If this avian flu turned lethal to human beings and spread globally the very question of who would have access to vaccines could well become a national security issue, the NIH/WHO meeting concluded, with nations shouting helplessly for immunization while other populations happily survived. Consider the scenario discussed in that Washington meeting: At a maximum production level, with Congress waiving liabilities for the private sector pharmaceutical makers, the US could not make enough vaccine just for its own population without a full year's lead time. That means in a pandemic the US would deny vaccine to its neighbors, Canada and Mexico - neither of which has the capacity to make flu vaccine. This could obviously destabilize relations between the nations, prompt illegal vaccine smuggling and lead to longstanding animosities between the countries.

QUESTION: Under United Nations agencies' guidance, Asian nations are slaughtering millions of chickens and ducks in areas where infected flocks have been found. Will this be adequate to stop the problem?

ANSWER: United Nations agencies - WHO and the Food and Agriculture Organization, chiefly - argue that the only hope of preventing the worst case scenario outlined above is to stop the further spread of avian flu by destroying tens of millions of animals. The method the agencies urge is called ring isolation: infected animals are identified, and all other poultry on farms in a concentric circle outwards of two or three kilometers are quarantined and destroyed. It's a little like trying to stop a forest fire by deliberately burning down trees in perimeter rings around the fire, thus eliminating "fuel" for further spread of the conflagration. Governments must find ways to ensure cooperation from the farmers: Chiefly, the farmers must be compensated for their killed livestock. If they are not, it is likely the poor farmers will hide the animals, try to sell them, or smuggle the animals.

Laurie Garrett is a Pulitzer Prize-winning journalist with Newsday and author of numerous books, including “Betrayal of Trust: The Collapse of Global Public Health”. In March 2004 she will become a Senior Fellow at the Council on Foreign Relations, specializing in global health and national security.