How to Deal With NGOs – Part I, China

Both China and Russia sat up and took notice of the role played by nongovernmental organizations (NGOs) in the political unrest and subsequent color revolutions in Georgia, the Ukraine and Kyrgyzstan. This two-part series examines the two governments’ responses to NGO activity within their borders. China dispatched intelligence officers to research the NGO role in Central Asia and also conduct background checks on NGO members in China – though no arrests, detentions or restrictions are known to have occurred. China expects local partners of foreign NGOs to report on activities to the central government, a policy that has slowed approval for some NGO projects. The organizations pose little threat to China’s one-party government, studies suggest, and public-policy experts anticipate that the surveillance will subside. In fact, local governments tend to thwart central-government goals more than the NGOs do, according to one political scientist. NGOs take the increased attention in stride, hoping for more visibility and perhaps even appreciation for their diverse efforts to improve Chinese communities. – YaleGlobal

How to Deal With NGOs – Part I, China 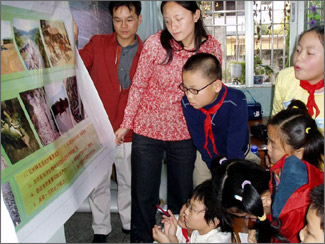 No color revolution here: China's NGO, Pacific Environment, has better luck in reaching out to the population

BEIJING: Domestic and foreign NGOs in China are under close scrutiny over the past year, with the Communist leadership worried that Central Asia's color revolutions were the work of civil organizations that could spread.

Party officials and the state media were blunt in assigning responsibility for color revolutions in Georgia, the Ukraine and Kyrgyzstan. On April 26, "The People’s Daily" published an article titled, “Is it American democracy or American arbitrariness?” The article argued that Washington’s “behind the scenes manipulation” was “indispensable” in bringing down these governments and that America’s aim was not to export American democracy, but contain Russia.

Analysts say that China has sent intelligence experts from various social science academies to Uzbekistan, Kyrgyzstan, the Ukraine, Belarus and Georgia to study the processes of political change, and especially the NGO role.

Russell Leigh Moses, an American political scientist who taught last year at People’s University in Beijing, says that Moscow has influenced China's thinking - and that the color revolutions are part of a US strategy to bring former Soviet territories under American influence, control the region’s energy resources and use the region as a base to contain China. A rumor last year suggested that Russians were advising the Chinese on events in the former Soviet satellites to prevent the same from happening in China.

Since then, China's Ministry of Foreign Affairs has established a special unit, known as the Foreign NGOs Management Office, within the Bureau of International Organizations, to review the work of all foreign NGOs in China.

Nick Young of the China Development Brief says the Chinese government launched investigations into the activities of domestic and foreign NGOs last year by civil-affairs, public-security and state-security officials. The results of the investigation were “inconclusive,” he says.

“They found a lot of organizations out there, but could not conclude that they threatened state security,” says Young.

Another major investigation continues this year. “They’re not just talking to NGOs, but also the partners of these organizations, and people who staffed them in the past,” he says.

While there have been no known arrests, detentions or new restrictions on foreign NGOs so far, the investigations still intimidate the organizations, especially the Chinese staff. "They know a lot about these individuals, their backgrounds and families,” Young says. “It makes you think they know everything and you better confess. But there’s nothing to confess.”

The investigations also intimidate the Chinese partners of NGOs, resulting in a slowdown of project approvals. Several NGO-related conferences on sensitive issues were canceled over the past year.

According to a Western expert, officials advise local partners to inform the government of any dealings with foreign NGOs and obtain approval before accepting foreign funds.

“At this time, no one knows exactly where the line is," says Young, "so people are cautious about what they are doing, and they’re not very adventurous.”

While American NGOs have been in the government spotlight, the "Financial Times" reported last November that an eight-year effort by the EU to promote human rights through cash grants to NGOs had also run into a wall. EU officials had always informally told their Chinese counterparts the identities of recipients before making grants, and Beijing had raised few objections, the newspaper reported. The newspaper quoted unnamed officials as saying that during the EU-China human rights dialogue last October, however, Chinese officials objected to almost every proposed grant.

It should come as no surprise that the government worries about NGO activities. Legal registration is very difficult for NGOs and requires having a government sponsor. Still, civil organizations survive under a variety of formal and informal identities. While the actual number of NGOs in China is unknown, their numbers have grown significantly: The Ministry of Civil Affairs reports 280,000 registered NGOs in China for 2005, including some 6,000 foreign NGOs, up from a total of 4,800 NGOs in 1988. The World Bank puts the present number between 300,000 and 700,000, while Hong Kong scholar Wang Shaoguang estimates that China has more than 8 million registered and unregistered, nongovernmental and quasi-governmental organizations.

Beijing’s heightened scrutiny comes as social unrest rises dramatically throughout the country and as NGOs set out to solve some of China’s most pressing problems. According to official statistics, public disturbances increased, from 58,000 cases in 2003 to 87,000 in 2005. The unrest often stems from protesters lacking legal means to resolve problems such as severe environmental damage, a widening rich-poor gap, runaway official corruption, health crises, property rights disputes and massive unemployment.

In an article titled “Major Challenges Facing the Chinese Leadership,” China expert Anne Thurston wrote that many of these NGOs “are both potential solutions and potential contributors” to social unrest. On the one hand, she says, they reduce tensions by confronting issues the government alone cannot solve. On the other, some problems are systemic, putting NGOs in conflict with local governments.

“They are demanding greater transparency and accountability on the part of the Chinese government,” writes Thurston. “And as representatives and champions of the disadvantaged, they are also offering alternative models of leadership, particularly at the local level.”

While growing numbers of protests worry officials, few China watchers expect social unrest to pose a challenge to the authority of the Communist Party unless disaffected groups organize more effectively across provincial boundaries and attract intellectuals. There are no signs yet that this is happening.

Although it’s often difficult to say what exactly is going on in the opaque world of Chinese politics, recent indications hint that the government’s concern with NGOs may recede.

The government has recently begun to take a “more nuanced approach” to the question, according to Moses, and “the notion of a united front, or a conspiracy, has pretty much died.” Furthermore, he says that the Ministry of Foreign Affairs, after taking on greater responsibility for NGOs, is now overwhelmed by bigger issues, such as North Korea and Iran. Finally, he notes that relations with Washington have improved in the past few months, making NGOs and the perceived Black Hand of America, less of an issue for the government.

Moses reports that there is consensus within the central government that local officials are responsible for much of the unrest in rural areas, rather than the domestic or foreign NGOs. “It’s very difficult now for local officials to argue that NGOs are behind the social problems,” says the political scientist.

Indeed, most Chinese NGOs work in line with the goals of the central government to improve society and want to cooperate with the government, Young says, as shown by a China Development Brief study. The main conflicts, he says, are with local governments, who often do not advance central-government policies.

Government investigations of NGOs could actually prove beneficial in the long run, according to Young, who argues that if NGOs are not understood, they will remain a perceived threat. “They need visibility and to be known by the government,” he says. “They need to be on the map.”

He is confident that the investigation will enable the government to better understand NGOs. “There’s no hidden agenda out there, but it will take them a while to find that out,” he says.

Paul Mooney, a freelance journalist, has been reporting on China for more than 15 years.