The US should be wary of progress in the Iranian nuclear standoff that could either be promising or illusory. Without discounting recent diplomatic achievements, Graham Allison, a former US defense official and a leading analyst of national security and nuclear weapons, cautions that US intelligence on Iran’s nuclear program may not be accurate. US intelligence officers could be drastically underestimating Iran’s nuclear weapons capability, as much as they overestimated Iraq’s weapons capability. The consensus of the US intelligence community is that Iran won’t be capable of manufacturing a nuclear bomb for at least five years, but that could be dangerously naïve. The US must fill in the gaps in its knowledge – or the “known unknowns,” to use the words of US Secretary of Defense Donald Rumsfeld. Allison lists four unknowns and ends with a warning – that Iran’s covert nuclear program could be more advanced than its overt program. Opponents of Iran’s nuclear capability could yet discover that Iran has made great strides undercover. – YaleGlobal 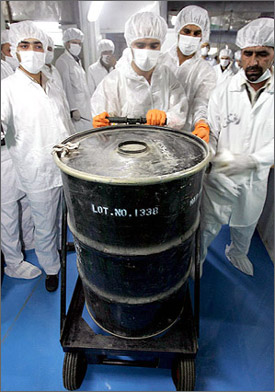 Tip of the iceberg? The world focuses on uranium conversion facilities like this one in Isfahan, but there are "known unknowns."

CAMBRIDGE, MA: For the first time since Iran walked away from negotiations with France, Germany and Great Britain in August 2005, there are rays of optimism in the crisis over the Islamic Republic’s nuclear program. Before breaking out the champagne to celebrate a diplomatic solution, it may be appropriate to pause for reflection on a troubling unknown: the potential scope of Iran’s secret bomb program. Twice shy after overrating Iraqi WMD, the American intelligence community may be seriously underestimating Iran’s progress toward a nuclear bomb.

The US has broken with 27 years of official policy and agreed to join the Europeans in negotiating directly with Iran – conditional on Iran suspending uranium-enrichment activities that could lead to a bomb. EU High Representative Javier Solana presented Tehran with a package of carrots coupled with the threat of sticks. The specifics of the offer, not yet public, are likely to include new proliferation-resistant light water reactors, international nuclear-fuel assurances including five years worth of nuclear fuel in Iran, and other commercial and technological rewards.

The essence of the agreement on the nuclear issue will reaffirm Iran’s right to the benefits of peaceful nuclear energy in return for Tehran postponing actual enrichment for a specified period.

Yet, the current approach to Iran is predicated on the largely unexamined assumption that its overt enrichment program at Isfahan and Natanz is the problem and that a deal to freeze or dismantle the centrifuge facility constitutes a solution. The strategy doesn’t address what US Secretary of Defense Donald Rumsfeld calls “known unknowns” – gaps in knowledge that have been recognized but not filled.

How good is US intelligence about nuclear facts on the ground in Iran? In April, when asked about Iranian President Mahmoud Ahmadinejad’s claim that “Iran has joined the club of nuclear countries,” National Intelligence Council Chairman Tom Fingar stated that there is no dissent within the 15 US intelligence agencies that Iran will get a nuclear bomb no sooner than “early to mid next decade.”

This American view stands in stark contrast to the Israeli intelligence judgment, with the head of Mossad reporting in December 2005 that Iran could have a nuclear bomb within two years.

Could the unanimity of American intelligence be “déjà vu all over again,” only the reverse of the Iraq WMD fiasco? In the lead-up to the Iraq war, American intelligence agencies expressed “high confidence” that “Iraq is continuing, and in some areas expanding its chemical, biological, nuclear, and missile programs.” They were dead wrong.

In the aftermath of that intelligence failure, the Silverman-Robb Commission examined the capacity of US intelligence agencies to assess WMD developments abroad. It concluded: “Across the board, the intelligence community knows disturbingly little about the nuclear programs of many of the world’s most dangerous actors.”

Consider also that members of the CIA have described the agency’s covert action abilities inside Iran from 2000 through 2004 as “unchanged: they're zero.” As James Risen reports in “State of War,” a US intelligence blunder allowed Iranian security officials to “roll up” the American network of spies in Iran. Most important revelations on Iran’s nuclear program have come either from informants who “walk in” to US embassies or from Iranian dissident groups with uncertain agendas.

Might Western intelligence services have underestimated Iran’s nuclear program? The judgment that Tehran is five to ten years away from a bomb focuses primarily on its overt enrichment program at Isfahan and Natanz. The dog that hasn’t barked is Iran’s covert programs for acquiring nuclear weapons. Four huge “known unknowns” lie at the heart of judgments about the threat posed by Iran:

First, is success in Iran’s overt effort a necessary condition for success in its covert programs? President Bush and his European colleagues operate on the assumption that it is. Otherwise their operational objective – a moratorium on research activities at Isfahan and Natanz – would be beside the point.

Second, have Iranian nuclear scientists and engineers already learned enough at the Natanz facility about assembling and operating a cascade of centrifuges that they can now independently build and run such a cascade? Have they passed what has previously been called a “point of no return”?

Third, has Iran bought highly enriched uranium from former Soviet stockpiles, Pakistan or elsewhere? Are they clandestinely building nuclear bombs using Chinese warhead designs acquired from A.Q. Khan? If so, engaging the US in bargaining about enrichment activity at Natanz could be a way to distract attention and buy time.

Fourth, has Iran purchased actual nuclear warheads from the former Soviet arsenal or from Pakistan to mate with its Shahab-3 missile?

Three “known” bits of evidence are hard to fit into the jigsaw puzzle that American intelligence has assembled. First, in August 2004, Iran test-fired a Shahab missile that featured a nose cone usually reserved for nuclear weapons. Second, IAEA Director General Mohamed ElBaradei has disclosed a connection between Iran’s nuclear program and its military activity, including a missile reentry vehicle. Third, the father of the Pakistani nuclear program, Dr. A.Q. Khan, sold Iran advanced P2 centrifuge designs that are still unaccounted for. President Ahmadinejad’s recent declaration that Iran is using P2 centrifuges could mean that Iran is much closer to its goal.

In the face of such uncertainty, President Bush should first and foremost assure that the intelligence judgments on which the current US strategy is predicated are as solid as they can possibly be. The President should assemble a “Team B” of skeptics and task them to pursue all known unknowns on the basis of all sources of information.

The best information on Iran’s declared facilities is gathered by IAEA inspectors. The IAEA has surprised even the Iranians with the quality of its investigations, including when it proved that plutonium samples did not match Iran’s alibi for them.

For information on possible clandestine activities, however, Russia is the indispensable nation. First, Russia is completing construction of Iran’s first civilian nuclear reactor at Bushehr, giving it a working relationship with Islamic Republic’s nuclear engineers. Second, in the mid-1990s, Moscow negotiated an agreement to supply Iran with technology and equipment for an enrichment facility – which was eventually cancelled under US pressure. Russian intelligence undoubtedly gleaned useful information about the scope of Iranian needs in negotiating this deal. Moreover, Russian arms sales have established connections between the two militaries. Indeed, the Tor-M1 air defense systems that Iran bought from Russia for $1.4 billion will be used to defend its nuclear sites.

President Bush should thus ask his friend President Putin for a favor: Russian and US intelligence experts should be assigned to produce a joint assessment of Iran’s nuclear program. President Putin will extract a price for Russia’s help in such an undertaking, one President Bush can afford to pay.

“Taqiyya” is an important concept in Shia Islam, which translated means “concealing or disguising one's beliefs, convictions, ideas, feelings, opinions, or strategies at a time of eminent danger, whether now or later in time, to save oneself from physical or mental injury.” Some Islamic commentators call this “diplomacy.” In negotiating with Iran, the US and its allies should be wary of the conjurer’s trick: distracting the viewer with one hand while the other pulls a rabbit from a hat.

Graham Allison is director of the Belfer Center for Science and International Affairs at Harvard’s John F. Kennedy School of Government. He is author of “Essence of Decision: Explaining the Cuban Missile Crisis” and “Nuclear Terrorism: The Ultimate Preventable Catastrophe.”