How to Reduce Poverty: Lessons from China

Conventional economic wisdom holds that foreign investment and trade boost economic growth and help alleviate poverty in developing countries. So why is it that some countries that seem quite open to the outside world are stagnating economically? David Dollar, Director of Development Policy at the World Bank, writes that a comparison of economic conditions in several Chinese cities points to the answer. A World Bank survey of 23 cities in China found that the cities which offered the best infrastructure and investment climate performed best economically. A clear and efficient legal system, a stable energy supply, and smooth transportation flows characterize the cities with the highest productivity and lowest unemployment rates. This is not only true within China but also applies to other cities around the world that are looking to benefit from globalization, Dollar argues. "If a city wants to 'get in the game' with economic globalization," he says, policy makers should learn the lessons China offers. - YaleGlobal

How to Reduce Poverty: Lessons from China 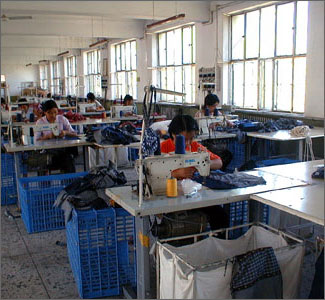 Clothing factory in Tianjin: The city gets a higher grade because of less frequent power outages and fewer transportation bottlenecks.

WASHINGTON: As countries attract increased foreign investment and trade, their poverty diminishes. The world's two largest countries - China and India - offer good examples of that truism. Yet some other countries with similar openness to trade and investment have neither grown significantly nor reduced poverty. Although many factors have contributed to this phenomenon, a series of recent surveys conducted by the World Bank and its partners point to some of the reasons for this paradox. Not surprisingly, growth requires infrastructure and good governance at both the national and local levels.

Within large countries there is also much variation across regions, resulting in varying regional outcomes from the same national trade policies. Differences in investment climate - the regulatory and infrastructure environment in which firms operate - can lead to varied growth rates, which has a distinct impact on poverty alleviation. 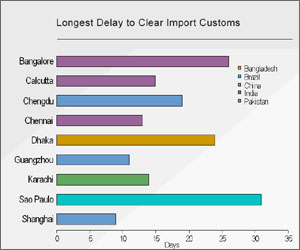 The surveys show at the micro level how different cities are connecting to the world market. In similar manufacturing industries, random samples of firms find many more exporters in the Chinese cities of Shanghai and Guangzhou than in the Indian city of Calcutta or Pakistan's Karachi. The surveys also find large differences in infrastructure and regulation across cities. In Shanghai, for example, firms report losing less than 1.5 percent of sales to power outages, compared to 6 percent in many South Asian cities. Sao Paulo, the leading industrial city of Brazil, has about twice the power losses of Shanghai. There are also similar data for clearing imports of materials, which is essential for many manufacturing firms (see Figure 1). Such delays are serious bottlenecks for firms trying to compete in the international market.

We have also found that many of the investment climate impediments impose more severe costs on small firms than on large ones. In Bangladesh, for example, some bribes are basically fixed costs that account for 2 percent of all the costs in small firms, but they are only 0.5 percent for large firms. Due to poor investment climates like this, achieving growth in these areas becomes difficult.

In China, we initially carried out a survey of 1,500 firms in the mega-cities of Beijing, Chengdu, Guangzhou, Shanghai, and Tianjin. This was followed by a survey of 2,400 firms in 18 smaller cities. The surveys cover both dynamic coastal areas as well as lagging regions in the interior and the northeast. These firms also represent a range of sectors, including export industries such as textiles, electronics, and domestic-oriented manufacturing such as auto parts, as well as services such as IT. This makes it possible to examine the regional differences within China. 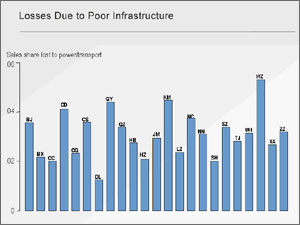 One important aspect of the investment climate is the infrastructure. Figure 2 shows what firms report as losses owing to power outages and transportation breakdowns. In general, these losses are low in China compared to other developing countries such as India and Brazil. Within China, however, there is quite a bit of variation. The infrastructure environment is excellent in Hangzhou and Shanghai, as well as in some small cities such as Jiangmen, but losses from power and transportation weaknesses are higher in cities such as Chengdu, Kunming, Guiyang, and Nanchang.

We are also interested in the capability of the legal system to provide an adequate basis for contract enforcement and property rights. The reported number of months to settle commercial disputes in court varies across regions in China. In Jiangmen and Shenzhen, for example, it takes six months to settle a typical dispute. In Guiyang, Harbin, and Wuhan, on the other hand, it takes more than a year, which discourages firms from using the legal system to solve problems.

In addition to the legal system, access to finance is also a key area in which some parts of China appear weak relative to many other middle-income countries. It seems that much of the business and investment in China is done in cash. In many cities fewer than half the firms surveyed have access to loans from the formal financial institutions. Usually 10 percent or less of input is purchased using trade credit from the suppliers. As China develops and moves into more sophisticated production lines, these weaknesses in financial services will become more of a hindrance.

This review of investment climates in 23 Chinese cities reveals that there is no one city that is best at everything. Nevertheless, there is a clear correlation between some indicators: some cities appear to be good in many aspects of the investment climate, while other cities lag in most areas.

These differences in productivity and investment in turn fuel differences in the growth of output and employment rate. Where there is a good investment climate, the labor force is likely to grow faster (usually at 10 percent or higher). Therefore, the unemployment rate declines at a quicker pace. It is this job creation that is key to higher living standards and poverty reduction in middle-income developing countries.

We can use these differences to estimate the effect of investment climate improvements on productivity; we ask what would happen if cities could reach the 90th percentile in each investment climate indicator. The results are that the gains for cities poorly invested would be very large: 58 percent in Changsha, 65 percent in Zhengzhou, and 103 percent in Nanning. Even for cities already with better climates, the effects of a further improved investment climate would still be significant (14 percent higher productivity for the typical firm in Hangzhou, 25 percent in Jiangmen, and 38 percent in Chongqing). These estimates summarize the fact that in the Chinese cities where investment climate indicators are good, productivity, investment, and growth at the firm level are high. It is also reasonable to think that lagging Chinese cities could improve the performance of their firms by improving the regulatory and infrastructure environment in which they operate.

Our survey provides an overall benchmark for cities in China. At the same time, it also provides guidance on which specific weaknesses need to be addressed. The lessons they hold are applicable to other cities in the world seeking to lift their economy by facilitating trade and attracting investment. A city's weak score may result from overly bureaucratic entry and exit regulations, a rigid labor market, serious corruption, or specific infrastructure weaknesses (power, transportation). Public policy reforms need to be focused on where these weaknesses lie if a city wants to "get in the game" with economic globalization.

David Dollar is Director of Development Policy at the World Bank.

I loved as much as you will receive carried out right here.<br>
<br>

The sketch is attractive, your authored material stylish. nonetheless, you <br>
<br>

very often inside case you shield this hike.<br>
<br>