The world has only a few global banks. HSBC, based in the UK, is cutting costs, laying off 50,000 or 10 percent of its workforce and eliminating units in emerging economies like Turkey and Brazil. “HSBC’s targeted returns are beaten by the best local banks in many countries,” writes Paul J. Davies for the Wall Street Journal. “HSBC insists the fight to remain global is worth it. It claims $22 billion, or 40%, of its revenues wouldn't be accessible without its global network.” Davies questions the bank’s categorizing of revenues as global, including large commercial clients whether they do cross-border business or not. He also suggests the struggle of global banks does not mean an end to globalization. HSBC blames its difficulties on regulatory costs, fines and a handful of underperforming markets, including the UK. As one commenter to the article points out, global banks may be too big to manage. – YaleGlobal

Strong local banks manage to conduct cross-border trades and beat targeted returns by global banks like HSBC
Paul J. Davies
Wednesday, June 10, 2015
The world does not need global banks in order to trade. Increasingly the world’s investors doubt whether they want them, either.

HSBC used its investor day Tuesday to try to prove the case for its global network. Even investors who are convinced will still be disappointed with the returns it expects to make. The doubters will likely not have been swayed.

In the U.K.-based bank’s defense, it stressed that its 10% return on equity target for the end of 2017 is a minimum, leaving room to do better if following winds improve: interest rates could rise more quickly than forward curves suggest or the U.K. could cut the bank levy. However, the bank’s targets for growth look optimistic, while its ultimate argument about a global bank’s value remains unconvincing. Its shares fell 1% Tuesday. 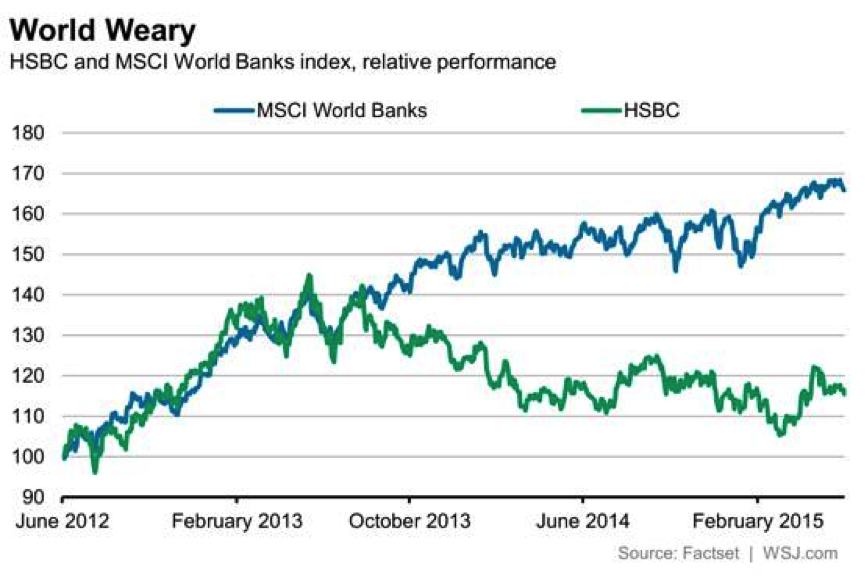 Despite the headlines of 50,000 job cuts, the target is for costs to come out flat in three years’ time compared with 2014, adjusted for the planned sale of businesses in Brazil and Turkey. The boost in returns from just over 7% in 2014 is to come from improving the U.S. and Mexican units and from growing commercial banking and to a lesser extent retail banking, mostly in Asia.

This plan will see HSBC increase risk-weighted assets in commercial banking alone by anywhere from 30% to 70% over the next three years. This is much faster than expected economic growth. 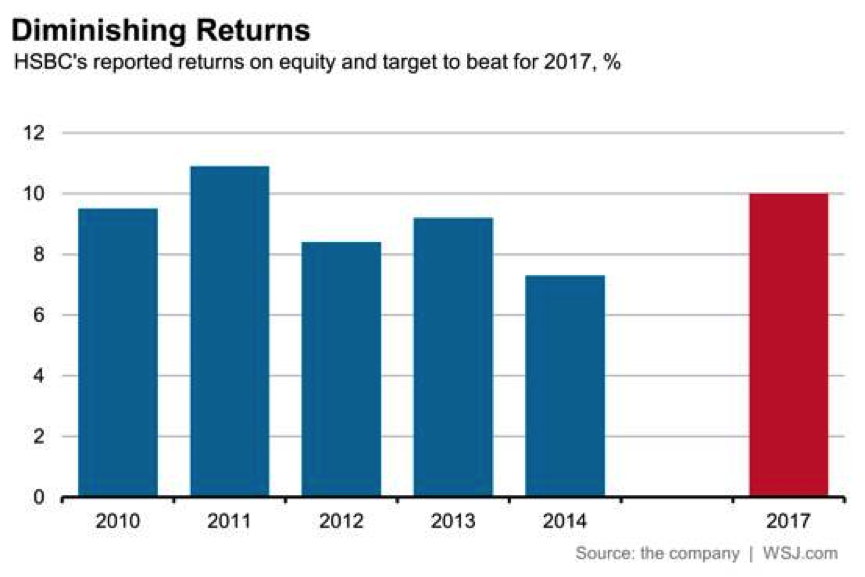 At the same time, it expects to grow investment banking revenues by mid-single digit percentages each year while slashing risk-weighted assets almost one-third. Big cuts might come from using smarter models, or using central clearing for derivatives, but that still looks a tough target.

Even then HSBC’s targeted returns are beaten by the best local banks in many countries. HSBC insists the fight to remain global is worth it. It claims $22 billion, or 40%, of its revenues wouldn't be accessible without its global network.

These include all domestic or cross-border revenues related to any client that operates in more than one country and all revenues of large commercial clients whether they do any cross-border business or not. That sounds inflated.

But the real question is what would happen to these revenues if HSBC didn't make them? The bank says there are just one or two others that compete globally, so either the world is in danger of becoming a place where perhaps one bank is the sole facilitator of vast chunks of global trade; or breaking up HSBC (or J.P. Morgan) would in some way reverse globalization. Neither seems a likely counterfactual case.

Ultimately, HSBC insists that its global model is valuable, but that returns are dragged down by regulatory costs, fines and other issues in just four or five underperforming markets, including the U.K. and those being sold or turned round.

It is a long way from proving that without these drags it will make world-class returns once more.

Paul J. Davies writes about European financial companies for Heard on the Street in London.