Women and children have been among the biggest losers in this era of globalization, if we consider the massive increase in human trafficking in recent years. Cheated or sold into a life of sexual slavery or indentured servitude, the victims of human trafficking and their stories reveal the dark underside of increased international mobility. With the demise of socialist states, in particular, women and children from impoverished areas have been smuggled or lured to wealthy industrialized countries where they are exploited for high profits. Although some steps have been taken by the European Union, the UN, and individual national governments to prevent these abuses, precious little has actually been achieved. The continued sale of human beings as commodities on the world market must be addressed globally if the practice is to be curbed. - YaleGlobal

Traffickers reap huge profits at the expense of society's most vulnerable
Michele A. Clark
Wednesday, April 23, 2003 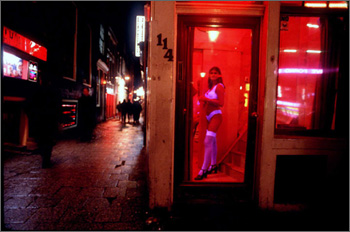 PRAGUE: Sasha sits across the table from me in a sun-filled room. It is mid-May. Pink tulips arch their long stems to follow the light, and a breeze fills the room with a gentle touch of air. This pleasant scene is a misleading backdrop for the sordid story that unfolds. Sasha shows me a Polaroid picture: her room in Amsterdam's red light district, where she spent over a year providing sexual favors for as many as thirty-six men a night; a sex slave in a country where she was an illegal alien with no friends and no protector, and where fear of reprisal against her young daughter bound her to her traffickers.

In 1996, Sasha was 26 and worked as a waitress in a small town in the Czech Republic to support herself, her daughter and her alcoholic husband. After a childhood rife with sexual abuse and multiple rapes, already on her third marriage, and watching her country struggle to emerge from a collapsed economy, she felt trapped in a cycle of abuse and poverty.

She was approached at work by a Czech man who promised her a lucrative job in Germany. Believing that she would be able to save money to ease her family's situation, she accepted the offer and left for the West, along with three other girls. Her fears began when her contact refused to return her passport after crossing the border, and were confirmed when she got to her destination - a sleazy bar on the outskirts of a German city. Once there, she was gang raped repeatedly to obtain her compliance, and eventually taken to Amsterdam's red light district where she was forced to become one of the many women behind the windows, making as much as US$80,000 tax free for her traffickers in her first year.

Sasha is one of an estimated 2-4 million girls who are globally trafficked for purposes of commercial sexual exploitation and forced labor every year. Along with growing trade and effortless world travel, globalization has also ushered in an increase in the trafficking of human flesh. The problem is so extensive that every country in the world can be considered to be a country of origin, transit or destination. Primary countries of demand include Western Europe, North America and parts of the Middle East and Southeast Asia.

Trafficking as a modern phenomenon was propelled onto the world stage in the 1990s. Traffickers, taking advantage of transparent borders, broadband communication, and political and economic upheaval as well as mass migrations of people, have preyed on the vulnerable. The displaced persons, the war victims, the poor, and those seeking the opportunities of the West to improve the quality of their lives, have made trafficking into a booming business as well as a tragic fixture of our times.

During the past decade, trafficking in persons has been systematically documented and debated on a large scale. But in this age, when increasing hostility toward immigration goes hand in hand with ever growing mass movements of people, the terms have blurred. A lack of clarity surrounding the definition of commonly used words such as smuggling, trafficking, and illegal immigration deflects attention away from the real plight of the victim covered by these definitions.

Smuggling implies a contractual relationship between those seeking to leave a country and those acting as agents to assist their client with entry to another country. Usually, the relationship ends once the migrants have arrived at their destination and have paid their legal fees. Illegal immigrants are individuals who travel to another country to seek employment, without possessing proper documentation. They may or may not have been smuggled.

Human Trafficking, on the other hand, is a business involving coercion, abduction, fraud, deception, abuse of power as well as abuse of vulnerability of women and children for purposes of forced labor or prostitution. It is only the trafficker who gains.

What are some of the causes behind this sudden explosion of human trafficking? Some advocates claim that the demand fuels the trade, and that opposing the legalization of prostitution must be at the core of any successful anti-trafficking measure. Other advocates claim that, because women are denied access to education and subsequent economic opportunities, they are vulnerable to exploitation.

While there is legitimacy in each of these perspectives, a more accurate analysis of the problem begins with the recognition that countries of origin as well as destination share in the culpability. In countries of origin, women voluntarily seek to leave their homes (although they are not knowingly seeking to enter a life of indentured servitude or commercial sexual exploitation) either because they have been lured by the lifestyle of the developed world or, at a more basic level, because poverty, the absence of work, or political repression at home drive them to seek a better life abroad, despite the risks. In many countries of origin, migration is encouraged because governments are unable to provide jobs or basic care. In other countries, where children are expected to provide for their parents, some parents act as agents, selling their children into the commercial sex industry or into forms of indentured servitude and slave labor.

A large number of trafficked women come from countries where the rule of law and civil society are at the mercy of political upheaval, or are merely in embryonic stages. Consequently, the governments of these countries pay little attention to the responsibility for their citizens that should come with sovereignty. Legal systems as well as entrenched social and cultural traditions contribute to conditions of vulnerability for women and children. Some of these include early or forced marriage, discriminatory legal practices, lack of access to education and opportunities, and exclusion from responsible leadership positions.

Countries of destination, or demand, are traditionally affluent countries of opportunity where prostitution may or may not be legalized or regulated. Women are trafficked into the legal sex industry, or into the underground sex trade, depending on the laws governing prostitution, but there is a market in both legal systems. Whether prostitution is legalized or not, the women, like Sasha, are slaves. Tragically, legal systems are such that the woman is frequently arrested and charged as an illegal alien, or criminalized upon returning to her home country for being in possession of forged documents. The traffickers are rarely convicted.

Governments and NGOs around the world have begun to respond to this modern form of slavery. Current anti-trafficking programs in countries of origin focus primarily on awareness and education campaigns as well as legislative reform. Currently, the US Trafficking Victims Protection Act of 2000 mandates that countries make serious and sustained efforts to meet minimum standards to eliminate trafficking in persons. The Act lists criminalization of trafficking as one of these standards. The European Union requires that accession countries demonstrate compliance with EU laws, including the Council Framework Decision of July 2002 on Combating Trafficking in Human Beings. However, little is being done to provide alternatives for women who feel that they have no choice but to leave their homes. It is necessary to combine public education and legislative reform with economic assistance and to ensure that adequately funded development projects include elements that address endemic vulnerabilities of women and children.

In countries of destination, emphasis must be placed on compassionate treatment of victims who are still considered as illegal immigrants, detained, and subsequently deported with little care for their emotional and physical needs, and for the fact that they were victims of a violent crime and not criminals themselves. The UN Protocol to Prevent, Suppress and Punish Trafficking in Persons treats the trafficked person as a victim, as does the US law but, to date, few countries have modified their laws to reflect this emphasis.

The continued treatment of millions of women and children as a commodity - be it sex slave or indentured servant - speaks volumes of the global community's failure to offer protection and opportunity across gender and age. The rapid proliferation of human trafficking and related brutality casts a dark shadow over the benefits that globalization has offered to many. Globalization has made the world a smaller place, but at cost to many of the most vulnerable. It is time to extend the benefits to all.

Michele A. Clark is the co-director of The Protection Project of the Johns Hopkins University School of International Studies in Washington, DC. The Protection Project is a human rights research institute working towards establishing an international framework for the elimination of trafficking in persons, especially women and children. She can be reached at mclark23@jhu.edu

© Copyright 2003 Yale Center for the Study of Globalization.

I don't see anything about globalization.