When the leaders of the eight industrialized countries meet in Italy this week, they will need to urgently address a silent crisis of hunger. With over a billion hungry people around the globe, it is critical that the developed world takes measures to increase agricultural productivity, writes Chicago Council on Global Affairs president Marshall Bouton. Such a solution is ever more pressing given the global economic slowdown in which the ranks of the poor are likely to grow. Part of solution lies in ushering a new Green Revolution that is more encompassing. The success of the earlier Green Revolution of the 1960s and 1970s, in which advanced farming techniques lifted productivity, succeeded in wet regions that already had good infrastructure in place – largely Asia. Other regions were left behind leading them to rely on imports to feed their populations. So a second Green Revolution cannot simply copy the first. Moreover, subsidies and aid with strings attached need to be eliminated as they distort prices and hinder local market development. Ultimately, eradicating hunger is a global concern as the spill over effects from famine and food price inflation – from public health crises to political instability – are likely to reverberate across borders. – YaleGlobal 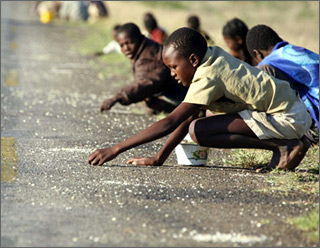 Grains of gold: The hungry in Africa scavange for kernels amidst a silent food crisis

CHICAGO: As the world still struggles to deal with the first truly global recession, little attention has been given to the growing number of hungry people and the possibility of mounting food crises in the years ahead. According to the World Bank, over a billion people around the world are now chronically hungry. Stagnant agricultural productivity, rising food prices and now declining incomes, especially in much of Africa and parts of South Asia, have brought the world dangerously close to humanitarian distress and resulting social and political instability. Averting such a calamity must be high on the global agenda. The G8 meeting in L’Aquila, Italy on July 8-10 is the time to start.

Surprisingly, while our world may be increasingly urban, the world of the poor and hungry remains overwhelmingly rural. Of the 1.2 billion people in the world living on less than a dollar a day, the majority, almost 700 million, are small farmers, farm laborers and their families in Sub-Saharan Africa and South Asia who are unable to sustain themselves, not to mention rapidly growing urban populations, due to decades of lagging farm productivity. 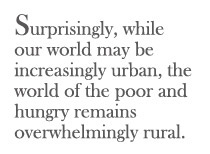 Most of the world’s hungry people are women and children. Women comprise 80% of Africa’s farmers, but they have access to only 5% of the continent’s agricultural land, credit and extension services, a key reason for the region’s average grain yield being one-fifth that of the US and Europe. Sub-Saharan Africa accounts for 55% of the global nutritional gap, with devastating impacts on children’s physical and mental development. Almost half of all children in South Asia, most of them on farms, are underweight for their age.

Why do we face such a crisis when it seemed so recently that the Green Revolution of the 1960s and 1970s had ushered in an era of food plenty? Beginning in the 1980s the world turned its back on agricultural development. The Green Revolution technologies of new seeds, fertilizer and farm practices resulted in dramatic yield increases for irrigated crops, especially wheat and rice, in settings with adequate infrastructure such as market roads, largely in Asia. These breakthroughs created the false impression that the world’s food and farming problems had mostly been solved, when in fact the Green Revolution had bypassed much of Africa and the dry-lands of South Asia. 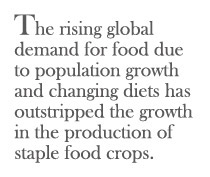 As a result, international support and developing country investments in agriculture declined sharply in the 1980s and the 1990s. Between 1980 and 2005, for instance, foreign aid to low income countries for agricultural development dropped from 17% of overall aid to 3%. By the 1990s, growth rates of global public expenditure on agricultural research had been halved. The rising global demand for food due to population growth and changing diets (producing one pound of beef takes three pounds of grain) has outstripped the growth in the production of staple food crops. Per capita production of maize in Africa, for instance, has actually fallen 14% since 1980. The projected increase of Africa’s population by 2050 means that African agricultural production would need to double just to keep the number of hungry people at today’s level.

To some extent the gap between food supply and demand has been met by imports. Commercial grain imports by developing countries almost tripled between 1990 and 2008. But the increasing dependence on food imports exposed these economies, and especially their poorest citizens, to wide swings in the world market prices. In the first half of 2008 grain prices doubled or tripled in some countries. Since then prices have fallen by 50-60% in many countries but remain well above their ten-year average, swelling the ranks of the extremely poor, who spend 50-70 percent of their incomes on food, by at least 100 million people.

These are dangerous portents for the future. Improving agricultural productivity will become a more not a less, challenging task in the decades ahead. The supply of readily arable land is diminishing in most developing countries. Water scarcity is already a constraint in the semi-arid tropical zones of Sub-Saharan Africa and South Asia where pressure on the land is high. According to the projections of the Intergovernmental Panel on Climate Change, weather extremes including severe drought are likely to become more frequent in those same regions. When the world recovers from recession, income growth and dietary shifts will once again put demand pressure on the world’s food supply.

But there is good news. We know how to increase agricultural productivity and farm incomes – through a combination of adaptive agricultural research, improved education and extension, and market development, all aimed at small farmers, especially women farmers. A new generation of seeds and farm practices and infrastructure improvements will make possible higher yields and increasing farm incomes. A new Green Revolution can help. Though Green Revolution technologies have been increasingly criticized as benefiting only larger farms and harming the environment, later studies showed that small farmers benefited as much. In fact, without yield-increasing technologies, the expansion of agriculture into marginal lands would have wreaked greater environmental damage.

What is required first and foremost is to put agriculture back at the top of the global development agenda. We seem to have forgotten that no economy has achieved sustained growth and graduated to middle income status without first developing its agriculture.

There are promising signs of change. The World Bank has announced a new focus on agricultural development in Africa. The G20 Summit in April 2009 addressed the need, and the G8 are expected to issue a major statement on global food security at their meeting this week. Under NEPAD – the New African Partnership for Agricultural Development – African nations have committed to devoting more resources to improving agriculture. 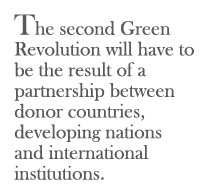 But the second Green Revolution cannot be a carbon copy of the first. It will have to be the result of a partnership between the donor countries, the developing nations and international institutions, with goals defined by African and Asian partners. It will also have to create public-private partnerships with universities and research institutes, agri-business companies, and non-government organizations committed to hunger and poverty reduction. Organizations such as AGRA, the Alliance for a Green Revolution in Africa funded by the Bill and Melinda Gates Foundation, represent the highly innovative approaches that can be realized by such partnerships.

The counter-productive policies of developed nations must also be changed. US, European and Japanese farm subsidies distort world market prices and undercut small farmers in Africa and Asia. European opposition to the use of genetically modified seeds in African agriculture has hampered productivity growth. The US practice that aid recipient countries buy US commodities with the aid has the net effect of depressing local markets.

While the above policy errors need fixing, the shock of global food price increases in 2008 holds out the hope that even in the midst of a great recession, this most fundamental of human needs can once again become the focus of global concern.

Marshall Bouton is president of The Chicago Council on Global Affairs and directed a recent Council-sponsored study of US global agricultural development policy.