Idlib, one of 14 governorates in Syria, has a population of about 3 million people, according to the United Nations. As a rebel stronghold during the Syrian civil war, Idlib is under siege from Russia, Iran and the Syrian regime, with residents desperate to flee to nearby Turkey. “The Idlib offensive could finally mark the end of the war in Syria -- but also the beginning of a new mass exodus,” reports Spiegel Online. A UN Security Council resolution allowing aid deliveries to Syria expires January 10; Russia and China have blocked an extension. “Hundreds of thousands of Syrians are left with no other choice than to make their way to Turkey.” Turkey shelters about 4 million refugees, blocking them from Europe for now. Turkey’s president insists the country cannot handle more refugees, and the Spiegel article suggests that the refugee crisis will be used as leverage against Europe for funding. “EU member states still haven't managed to agree on a unified asylum system for the continent, resulting in a situation whereby even a moderate increase in the number of refugees arriving in Greece, for example, can trigger a humanitarian crisis,” reports Spiege, describing overcrowded camps and dire conditions. If Turkey reduces its patrols, the refugee crisis will shift to Europe, fueling nationalism and populism. – YaleGlobal

Read the article from Spiegel Online about the attacks on Idlib in Syria and a new wave of refugees. 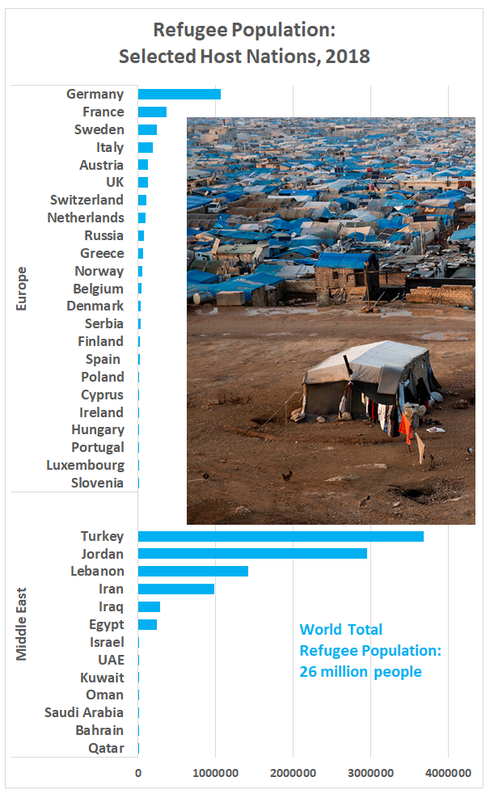 Totals include refugees from all sources; the world’s largest source of refugees is Syria (Source: Data, World Bank and UNHCR; photo of camp near Idlib, Luminae Group)

Desperate Migration in the Middle East

US Retreats From Syria and the Middle East

The Economist: Refugees as Pawn in the Struggle for Syria

© SPIEGEL ONLINE 2020 All Rights Reserved Reproduction only allowed with permission