Surrogacy Bill 2019 may cripple an industry that has flourished in India since 2002. “The stringent bill under consideration bans all forms of commercial surrogacy, stating that women who agree to carry babies to delivery as surrogates must agree to do so for ‘altruistic’ reasons and must be ‘close relatives’ of the recipients,” explains journalist Neeta Lal. “Significantly, it allows only Indian couples, married for at least five years and childless, to opt for surrogacy.” The proposed law would prohibit the procedure for single, divorced or gay individuals. India once had 3,000 clinics, with about 2,000 babies born to foreign couples each year, according to some research, but the country has gradually tightened regulations in recent years. The issue divides Indians. Critics suggest the practice exploits poor women and imposes risks. Supporters suggest the women, informed of the risks, should have control over the bodies. Regulations on surrogate parenting are uneven worldwide with few statistics or legal protections. The exact number of surrogate children is unknown. Lal concludes that bans by individual countries encourage would-be parents to cross borders in search of women willing to bear children, and global rules may be required. – YaleGlobal

NEW DELHI: India is poised to impose a blanket ban, criminalizing commercial surrogacy through the Surrogacy Bill 2019, a move that will ring a final death knell of the country’s US$2 billion industry. The stringent bill under consideration bans all forms of commercial surrogacy; women who agree to carry babies to delivery as surrogates must agree to do so for “altruistic” reasons and must be “close relatives” of the recipients.

Significantly, it allows only Indian couples, married for at least five years and childless, to opt for surrogacy. The bill will not allow singles or couples from the LGBTQ community to have a child through surrogacy. There are also rigorous criteria for surrogate mothers, genetic parents, fertility clinics, medical professionals, and the egg and sperm donors. Violators face up to 10 years imprisonment and fines of up to US$14,066.

India’s Health Minister Harsh Vardhan has called the ban “the need of the hour.”  The ostensible aim behind the ban is to prevent exploitation of surrogate women at the hands of brokers and clinics. As the bill says: “Due to lack of legislation to regulate surrogacy, the practice of surrogacy has been misused by surrogacy clinics, which leads to rampant commercial surrogacy and unethical practices.”

In 2002, India legalized commercial surrogacy to promote medical tourism, prompting a rush from thousands of hopeful would-be parents from the United States, the United Kingdom, Australia, Europe, Canada and Israel to Indian hospitals to choose from a bank of surrogate mothers to carry their babies. A pool of highly qualified doctors and fertility experts as well as relaxed regulations governing such arrangements propelled demand. The Indian Health Ministry excluded surrogacy for foreigners in 2015.

Affordable rates by hospitals and gestational carriers played a catalytic role, too. While in the United States., surrogacy can cost $70,000 to $150,000, it ranges from $20,000 to $60,000 in India, depending on the clinic and services. Indian surrogate mothers reportedly earn between US$5,000 to $16,000 per birth depending on the location, birth and terms of contract, a fraction of what may be offered to their western counterparts.

An estimated 2,000 foreign babies were born to Indian surrogates each year, according to the 2014 book Patients With Passports: Medical Tourism, Ethics, and Law by Harvard law professor I. Glenn Cohen. Another study by Sama, a resource group for women and health in India, states that about 3,000 clinics offered surrogacy services.

The controversial bill has polarized public opinion. While supporters of surrogacy have slammed it, bioethicists and feminists endorse the clampdown. “Selling pregnancy as a service is objectionable because it puts a price on human body parts and life much like organ trade,” opines Ranjana Kumari, physician and woman’s rights advocate. “The ban will stop vulnerable women from being exploited by the system.” The practice is especially harmful in nations with glaring gender inequity, adds Kumari. In a 2017 UN Development Program report on gender inequality, India ranks 125 among 159 countries. 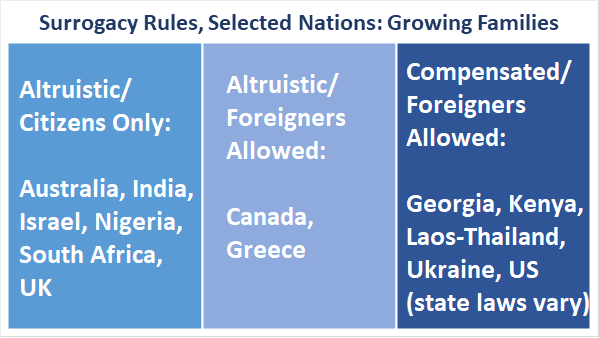 Worse, many Indian women are ignorant of the risks of such procedures. A 2015 study found Indian surrogates unaware of how implantation of multiple embryos, fetus reduction or caesarian sections can imperil their health or even prove fatal, and a 2018 study also detailed risks.

Banning commercial surrogacy, some critics point out, could create a black market akin to the one in organ trade and prostitution with the additional risks of poor women being trafficked or foreigners abandoning children born through surrogates. For cross-border childless couples, long legal battles to obtain their surrogate children aren’t uncommon. “Cross border surrogacy also leads to problems in citizenship, nationality, motherhood, parentage and rights of a child,” explains a Delhi-based fertility expert who requested anonymity. “Children are at times denied nationality of the country of the intended parents.”

In India, two-week-old Baby Manji Yamada was abandoned in 2008 after the commissioning parents in Japan divorced during the pregnancy and the commissioning mother refused to accept the baby. The court granted custody to the baby’s paternal grandmother after a protracted courtroom battle, but the case created a public uproar as well as demands for a legal framework to address such infractions.

Despite the fraught emotional nature of commercial surrogacy, however, its supporters suggest that a ban is hardly the solution: A ban could start a trend of “reverse surrogacy,” whereby desperate Indians will be forced to cross borders to look for surrogates.

Making commercial surrogacy illegal denies women agency over their own bodies while also depriving them of livelihood. Studies suggest a key motivation among surrogate parents is altruism, while many have specific goals in mind, such as sending their children to better schools or clearing family debt. Remuneration hoists them over the poverty line. A 28-year-old from Gujarat, living in New Delhi with two children, says that for her surrogacy offers a pathway out of poverty. “I also feel happy that I’m able to help someone who isn’t able to have a baby of her own,” says the part-time cook.

According to Flavia Agnes, a women’s rights lawyer and activist, a woman should have the right to decide whether she wants to bear the child for herself or someone else: “Surrogacy isn’t just a moral issue, it is linked with livelihoods. Many candidates are able to better their lives through such arrangements. This is done in consultation with spouses and families; so what’s the problem?” While some women may be coerced into surrogacy by families and brokers, others are willing participants. Agnes argues that the industry should not be dismissed as inherently exploitative and surrogate women as “damsels in distress.”

The ban could also encourage an unregulated cross-border industry across neighboring countries like Thailand, Nepal and Cambodia. Agnes says, and jeopardize the safety of women and children even more. In Cambodia, for instance, proscribing commercial surrogacy has resulted in relocation of surrogacy clinics abroad. Pregnant surrogate mothers are routinely paid in advance to cross the border into Thailand to deliver – as Thailand only objects to surrogacy agencies from operating within its borders.

In 2015, Thailand made it illegal for foreigners to seek commercial surrogacy in Thailand or from Thai women. Nepal introduced similar restrictions. Vietnam also passed a law legalizing altruistic surrogacy while discouraging commercial surrogacy. Cambodian mothers are routinely sent to Laos to deliver babies.

Agencies exploit legal loopholes to sign up clients for surrogate babies. When India first banned surrogacy for gay couples in 2012, infertility businesses in Delhi continued to sign on gay clients from all over the world, explains Sharmila Rudrappa, professor of sociology at the University of Texas, Austin, for The Conversation. “Clients shipped their frozen sperm to Delhi, which was used to fertilize eggs from Indian donors,” she writes. “The resulting embryos, legally belonging to the gay men, were implanted into Indian surrogate mothers. To avoid the ban, infertility clinics then moved surrogate mothers across international borders into Nepal. There, they gave birth and clients arrived to pick up their children.”

The issue is complex and there are no simple answers. Some suggest an international agreement, similar to the Hague Adoption Convention, would streamline the process while discouraging many of the ills that complicate commercial surrogacy transactions. Indeed, the dearth of an international law on surrogacy creates complications for all stakeholders given the global nature of the business. At the same time, banning commercial surrogacy by individual countries is no solution and tantamount to throwing away the baby with the bathwater. Prudence lies in allowing strictly regulated commercial surrogacy while educating and sensitizing surrogates about the risks and ensuring protection of health and commercial interests for all participants.

Neeta Lal is a New Delhi–based editor and journalist.

Rights © 2019 YaleGlobal and the MacMillan Center

The question of surrogacy is extremely complex. Many people are still unsure whether such treatment is acceptable or not. But I think it is a really progressive method. Many infertile couples simply have no other options! I think altruistic surrogacy is more of a risk than commercial. Commercial surrogates are proven and healthy, but altruistic surrogates are unknown. Maybe a bouquet of genetic diseases or unwillingness of a surrogate mother to give up her child. You just have to remember that it is incredibly important to pay great attention to all the main points. For example, one of my closest friends is sterile. And she and her husband found a surrogate mother in a clinic where they were dealing with infertility. This is a Ukrainian clinic (Feskov Human Reproduction Group), where all mothers are healthy and tested, the agreement is supported by a contract, so there is a certain guarantee that everything will be in order. Only biological parents are mentioned in the birth certificate, and they received their travel documents within a few days. And now they have returned home as parents! Good luck to everyone who wants children)