The upcoming climate summit in Copenhagen in December poses some challenging, but not insurmountable problems for the Indian government. Co-Chairman of Infosys Technologies Ltd, Nandan Nilekani explains that India needs to engage actively in the climate debate, not only because India is likely to be one of the countries most affected by climate change, but also because it will enable India to work towards building a green economy. For one, India should not be forced to accept binding cuts in emission and pay for the damage caused by developed nations by limiting its own economic development goals, according to Nilekani. Yet, such an external position does not mean that environmental conditions can be ignored domestically. Eighty percent of India’s rural population depends on the health of its rivers and land. In the end, “low-carbon” policies and development don’t have to be mutually exclusive. The US’ reduction of acid rain over the past 20 years is a good example. India’s future depends on the country addressing climate change today, lest it suffer unwanted results tomorrow. – YaleGlobal 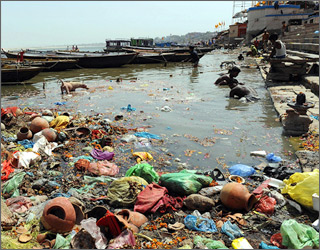 BANGALORE: The emergence of a Congress Party-led coalition government with a comfortable majority could not have been better timed. A government with a strong mandate is well placed to define India’s long-term strategy towards climate change, and to call for the steps that the nation and the world need to take at the Copenhagen climate summit scheduled for December.

These climate negotiations are easily the most complex collaborative effort the world has undertaken, and India, like all nations, is being asked to sign on to the deal being worked out at Copenhagen. India is likely to be among the most affected by coming climate shifts – in prediction maps, the subcontinent shows up as dark red, threatened by melting ice caps, shifting rainfall patterns and rising sea levels. The Indian government rightly points out that the burden of cutting carbon emissions should lie with the developed nations responsible for the accumulated levels of Greenhouse Gases (GHGs) in the atmosphere. 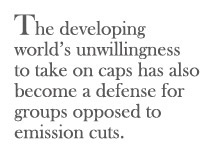 The opening sessions to the Copenhagen negotiations have indicated that developed nations that were early holdouts from Kyoto – including Australia and the US – may eventually sign the climate deal. But as the deadline for an agreement nears, developed country targets and planned carbon-reducing strategies are falling victim to local politics. In Europe, the largesse in carbon trading permits to industries has allowed them to pollute at rock-bottom prices. The developing world’s unwillingness to take on caps has also become a defense for groups opposed to emission cuts. In the US, the Waxman-Markey carbon bill is facing opposition from those who argue that without India and China’s participation, US curbs will have no overall impact.

The big question for India here is how it can reconcile its own goals with the aim of building an effective global climate deal. One way to move forward is for India to reiterate a commitment that Prime Minister Manmohan Singh pledged at the G8 Heiligendamm summit in June 2007: that India will not exceed, between now and 2050, the per capita emissions of developed nations. 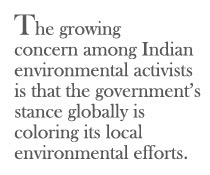 This pledge to keep its per capita emissions below the industrialized world is a significant one: with 60-80% emission cuts planned by 2050, developed nations would bring down their emissions from the current range of 10-20 tonnes per head to less than four tonnes per capita. This means that India, despite rapid growth and a predicted sixteen-fold rise in per capita income will have to limit emissions to no more than twice its current level of two tonnes per capita. India has in essence, committed to growth as a low carbon economy.

India cannot be expected to take on binding emission cuts over and above this commitment. It is only fair that Western nations take responsibility for the accumulation of GHGs over the last century. Independent assessments support this view that India should stay away from mandatory cuts. They’ve shown that even with rapid growth, it will still remain among the least carbon intensive countries in the next few decades. Besides, much of India’s future emission growth, the World Bank points out, will come from providing essential energy services to its population.

Another aspect of fairness that the country should focus on during negotiations is ensuring financial flows and technology transfers from developed nations to the developing world, for climate mitigation and adaptation. This is literally a hundred billion dollar issue – the estimated costs of mitigation for India. But this has long been a sore point for Indian negotiators. The proposals of assistance from developed nations have fallen far short of what India needs, and one Indian diplomat recently compared these to offering to 'push a broken down car, but with two fingers'. Besides financing, India must insist on programs tailored to its economic needs, which include support for carbon reducing technologies and microfinance schemes, as well as expertise in sustainable urban and industry growth. An emphasis on fairness also means that developed countries refrain from imposing carbon tariffs on exports from India.

While taking a firm stand in international negotiations, India has to take a closer look at its domestic approach to climate change. The growing concern among Indian environmental activists is that the government’s stance globally is coloring its local environmental efforts. “The defense of our emissions internationally has been long used to justify apathy towards controlling pollution in India,” the Indian environmentalist Sharad Lele told me. This attitude ignores the increasing negative impact of pollution on India’s agriculture, urbanization and economic growth. It is becoming clear that the traditional, carbon-intensive model of growth will not work here for long – we have to embrace a low-carbon approach.

In 2008, India’s Congress Party-led government put in place a National Action Plan on Climate Change, which emphasized renewable energy, adaptation and greater energy efficiency. Now returned to power, the government has the chance to intensify these efforts. This includes low-pain measures such as zero tariffs on low emission products, and tax exemptions for clean energy investments. More ambitious policy could include a smart grid through which people can both buy and sell excess energy, and efficiency and pollution standards that nudge industry towards greener choices.

The new government has already tabled plans to account for the depletion of natural resources while calculating India’s GDP. However, India has been reticent when it comes to ambitious attempts at controlling pollution and emissions, on the concern that it will hurt its economy.

In doing so, the country may have overlooked the opportunities that come with a pro-environmental policy. The burden of pollution has fallen disproportionately on the poor. Over 80% of India’s rural poor depend on the country’s degraded common lands and water, and on its declining forests. For India’s legislators, whose emphasis in recent years has been on ‘pro-poor’ policy and addressing income inequalities, a low-carbon approach ought to then be an overriding interest.

Such a low-carbon approach doesn't have to be anti-development, as it is often perceived; it can both deepen and expand India's markets, by incorporating these communities into them. For example, regulation that requires the industry to offset carbon-intensive projects with green investments can incorporate people on common lands into such projects, paying them for planting trees and maintaining forested land. This approach, combined with property rights for people who depend on common resources, would create new wealth within these communities.

Other countries have already demonstrated that pollution does not have to be an inevitable accompaniment to industrialization. In fact, it is the US, now so tentative about cutting emissions, which gives us hope here. Two decades ago, acid rain was a growing problem in the country. But an innovative system introduced during the 1990s allowed utilities to trade credits for sulfur dioxide emissions, and since then, acid rain in the US has been cut by more than half.

Until now, India has been at the sidelines of the climate negotiations. But India cannot sit a climate crisis out - it will affect the country regardless. India must help build the levees, and plan for the gathering storm. The new government has a clear mandate, and with it comes the chance both to define a powerful role for India over the next six months in global climate negotiations and to implement an ambitious, domestic low-carbon policy.

Nandan Nilekani is Co-Chairman of Infosys Technologies Ltd, and author of “Imagining India: The Idea of a Renewed Nation.”