The United States, in efforts to slow legal immigration, is planning changes for the H-1B visa process that allows skilled workers from around the world to work in the United States. One regulation would “mandate employers to register without paying the H-1B visa fees of those employees they intend to sponsor” and a “lottery system would shortlist people for the work permit.” About 70 percent of H-1B visas went to applicants from India and about 10 percent to those from China in 2015. Indian IT firms are reporting higher rejection rates for their applications under the “America first” policies of the Trump administration. The regulations will be subjected to public review before being finalized. Another change, announced in the US Federal Register, requires means testing and "self-sufficiency," barring applicants who require public assistance or fail to meet income standards. The rule requires immigrants to be “self-sufficient.” About 800,000 green cards were issued in 2016 and the changes could reduce that number by more than half, reports the Migration Policy Institute. H-1B visas last three years and can be renewed once. – YaleGlobal

Indian IT companies rely on H-1B visas for their operations and worry that US rule changes could be non-transparent and favor US firms over foreign firms
Tuesday, August 20, 2019

Read the article from the Economic Times about proposed changes in the US H-1B visa that allows skilled foreign labor to work in US jobs.

Just under half of H-1B approvals between 2010 and 2016 went to foreign worker with advanced degrees earned in the United States or internationally, reports Pew Research Center.

About 40 percent of visas went to outsourcing firms, both those based in the US and other countries, reports the Washington Post. 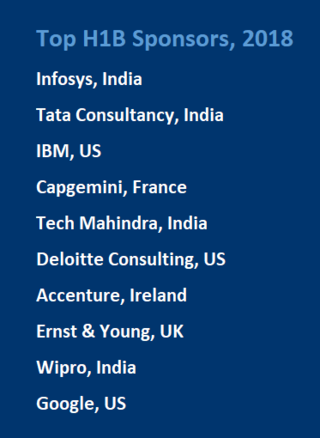 Give Us Your Skilled Masses