Indians still move abroad to work or study, but increasing numbers of restless immigrants are now turning to their ancestral land for opportunity. “By several estimates, between 50,000 and 60,000 information-technology professionals alone have returned to India from overseas since 2003, most to the suburbs of New Delhi, Hyderabad and especially Bangalore, the nexus of what Indians call their 'brain gain.'" explains professor and former National Geographic photographer Steven Raymer. But their path of return may not be all paved with gold as the current crisis dampens IT services industry, and even Indian companies outsource work to Mexico and China and others seek less expensive locations in Vietnam and the Philippines. The Indian government extends dual citizenship, tax breaks and the right to own all but agricultural land to Indians holding foreign passports. Reverse immigration requires adjustment in many ways, yet the returnees have the invaluable opportunity to compare theories, processes and culture from east and west, and possibly move technology along a more innovative and rewarding track. – YaleGlobal 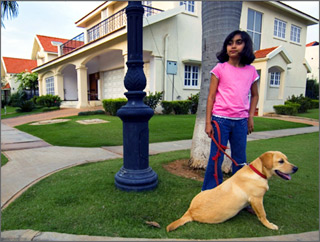 BANGALORE: Residents of the South Indian city of Bangalore, once an orderly enclave of colonial-era buildings and well tended gardens, have started wearing earplugs to dampen noise from the maelstrom on their chaotic streets. It is the noise of growth boosted in part by the return of many of India’s technologists whose departure to the west was once bemoaned as brain drain. Call centers, software and engineering companies and some of the world's most advanced research centers prosper on the capital – both human and monetary – of Indian émigrés recently returned from abroad with foreign passports, foreign bank accounts and families sometimes more Western than Indian.

Bangalore's frenzy is emblematic of the reverse brain drain – or reverse diaspora – that helped propel India onto the world stage in ways that were unimaginable just a few decades ago. While Indians still go abroad to work and study – there are a record 80,000 Asian Indian students now enrolled in US universities – a new class of Indian expatriates, fluent in the ways of the West, energizes India. By several estimates, between 50,000 and 60,000 information-technology professionals alone have returned to India from overseas since 2003, most to the suburbs of New Delhi, Hyderabad and especially Bangalore, the nexus of what Indians call their "brain gain." 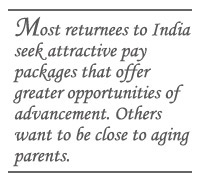 At Bangalore's new international airport, packed airliners arrive from London, Paris, Frankfurt and Singapore bearing Indians with degrees from the world's top universities and plans to reconnect to Mother India, whose economy has been growing at nearly 9 percent annually until the recent worldwide financial meltdown. Some were recruited at job fairs in cities across the US, home to 2.32 million people of Indian origin. And most say they return to India for attractive pay packages that offer a comfortable standard of living comparable with life in the US along and greater opportunities of advancement. Others want to be closer to aging parents.

But Bangalore, home to more than 1,000 information technology firms and 10,000 US dollar-millionaires, may price itself out of the market. While India’s technology and outsourced-services industries continue to boom, earning an expected $52 billion in the 2007-2008 fiscal year, wage inflation in Bangalore runs at up to 50 percent a year, making it only marginally less expensive for sophisticated tech work than doing business in California. 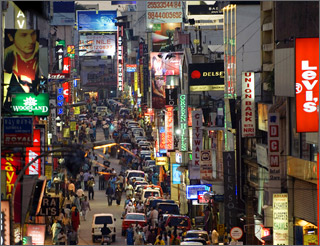 Messy Bangalore: It takes returnees some time to get used to (Photo: © Steve Raymer) Enlarge image

As a result, some global brand names shifted operations to cheaper Indian cities like Chennai, Kolkata and Hyderabad, where the costs of doing business are as much as 30 percent less. A few companies are looking beyond India altogether, betting on lower-wage countries like Vietnam and the Philippines. Intel Corp., for example, says it will not significantly increase its 2,400-person staff in Bangalore, instead ramping up operations in Vietnam. And in what may be one of the most ironic twists in global outsourcing, several Bangalore-based technology companies have themselves outsourced operations to China and Mexico to tap cheaper labor pools amid the costly hiring situation at home.

If Bangalore is losing some of its luster, it remains the world’s fourth largest technology hub and claims to have the fastest-growing wealth base in the Asia-Pacific basin. And for many Americans, this means Bangalore is both a threat and opportunity: A threat because it now boasts at least 160,000 technology workers compared with about 175,000 in Silicon Valley. Moreover, much of this talent, especially at the middle and top levels, has been transplanted from the San Francisco Bay area to India. Bangalore also represents an opportunity for US companies to tap into India's prodigious brainpower and entrepreneurial spirit. From Bangalore, Americans and citizens of other developed countries are having their tax returns prepared, CAT scans and MRIs read, mortgages analyzed, lawsuits researched, airline reservations confirmed and computer glitches unsnarled – all at the speed of light, thanks to broadband internet connections that make the city as close as the shop or hospital next door. 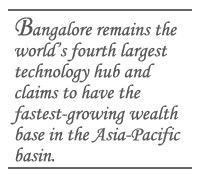 As Bangalore moves further up the technology ladder, this four centuries-old city of nearly 6 million citizens has ambitions to challenge places like Silicon Valley and the Research Triangle at Raleigh-Durham, North Carolina, as a world center for innovation. Microsoft plans to spend $1.7 million in India over the next several years and has opened a research center there, following ones in Redmond, Washington; Cambridge, Massachusetts, and Beijing. IBM, Oracle, Cisco Systems, Intel, and Hewlett-Packard also have campuses and research centers in Bangalore staffed, in part, by returnees from abroad.

The corporate headquarters of Infosys Technologies Ltd., India's second-largest outsourcing firm, are tucked away in a section of Bangalore called Electronics City, which may be a slight misnomer considering the shantytowns and swarms of poor Indians living along its fences.

But the view inside the Infosys campus is buoyant with double-digit profit margins, revenues in the low billions of dollars, and plans to hire thousands of new employees worldwide over the next several years, with food courts, gyms and a putting green for employees, including returnees from abroad attracted by the Western-style work environment and generous paychecks. In an interview with the New York Times, Nandan M. Nilekani, Infosys chief executive and co-founder, said, "Expatriates are returning because India is hot."

Typical of those young Indians moving Infosys into the top ranks of global companies is Smita Agrawal, a savvy marketing manager who has worked in Tokyo, Minneapolis, Los Angeles and Little Rock, Arkansas. Preferring Western business attire to saris, she nevertheless finds India to her liking. "After-office hours is where you lose out in the USA," she says. "There's a cultural gap in America and you just don't have the face-to-face interaction with Americans that we have here in India." Confessing that, "Bangalore and its messiness take some getting use to," Agrawal nevertheless sees India as a place to enhance her career. 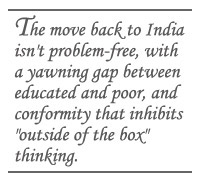 Peers at companies from Yahoo! to startups that only the digital cognoscenti would recognize agree that being part of the reverse diaspora has its satisfactions, both professional and cultural. In Bangalore and other major Indian cities, there’s no shortage of luxury shopping malls and housing developments to lure home expatriates who already are the highest-paid ethnic group in the US. At Palm Meadows, one of several gated communities in Bangalore where the computer-savvy elite live, it would be hard to find an Indian passport holder, aside from the maids and gardeners because most residents are citizens of US and UK or dual nationals. Ajay Kela, chief operating officer of the software development company Symphony Services, looks around his neighborhood of four-bedroom Spanish-style villas and says he made his decision in a day to pull up roots in Foster City, California, and return to India. "India is an efficient location for software design and besides, the middle class is exploding here," Kela says.

But the move back to India hasn't been problem-free, with grinding commutes over potholed roads, a yawning gap between educated and poor, and a mind-numbing conformity that inhibits the creative "outside of the box" thinking associated with Palo Alto or Raleigh-Durham. "There is raw talent in India," says Sridhar Ranganathan, a former Yahoo! executive and managing director of Blue Vector India in Bangalore. "But how to polish that talent is India's dilemma and my challenge."

Steve Raymer, a National Geographic Magazine staff photographer for more than two decades, teaches photojournalism, media ethics and international newsgathering at Indiana University in Bloomington. He is the author and photographer for “Images of a Journey: India in Diaspora.”