The world’s western leaders would express outrage if China detailed a million Christians or if India pointedly excluded refugees who identify as Christians. About 1.8 billion people, a quarter of the world’s population, are Muslim. “By downplaying much larger-scale violations against Muslims, [western leaders] jeopardise what remains of the west’s human rights credibility,” argues Edward Luce for the Financial Times. Such passivity reinforces the global shift to religious nationalism that began in the Muslim world…. Because Muslims are resented more than other minorities, their plight tests whether liberal democracy means what it claims to mean.” Opinion polls suggest that Muslims struggle to integrate, Luce reports, and Muslim nations treat their own minorities poorly. Repression and the failure of major nations to speak out could encourage religious extremism. – YaleGlobal

Read the article from the Financial Times about major western powers not speaking out about mistreatment of Muslims by China and India.

Edward Luce is the US national editor and columnist at the Financial Times. 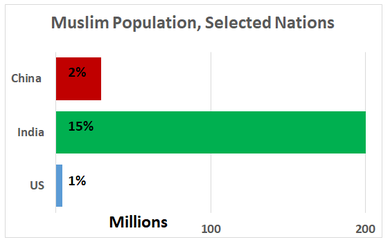