The common wisdom that democracy will help subdue the Islamic militantism is being questioned in Indonesia. While the world condemns the terrorists who have struck Indonesia in recent years, Sadanand Dhume reports that one of Indonesia's own political parties embraces those terrorists' Islamist ideology. The Justice and Prosperity Party (PKS) shares the radical beliefs of Egypt's Muslim Brotherhood—and is scoring troubling success for those beliefs in Indonesia. PKS is riding a wave of Islamic conservatism that has overwhelmed Indonesia's traditional religious liberalism in the past three decades, and that now threatens the nation's success in a globalizing world. Embracing modern technology but rejecting modern values, PKS is actually more dangerous, writes Dhume, than the militant Jemaah Islamiyah because its apparent moderation is deceptive. The politicians of Justice and Prosperity can do more harm from within the Indonesian government than the terrorists of Jemaah Islamiyah could ever do from without. If Indonesia embraces the Justice and Prosperity Party's brand of radical Islam, argues Dhume, the nation will be on the same fundamentalist path that terrorist bombs tried to bring about. – YaleGlobal 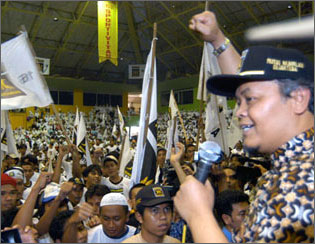 PHILADELPHIA: As world leaders condemned last month’s suicide bombings on the resort island of Bali, Indonesian leaders set a different tone. Hidayat Nur Wahid, speaker of the People’s Consultative Assembly (Indonesia’s highest legislative body) pooh-poohed the idea of another terrorist strike just three years after the October 2002 attack that killed more than 200 people, and instead blamed the most recent bombings on rivalries within the local tourism industry.

For those who follow Indonesia, Nur Wahid’s comments hardly came as a surprise. The speaker has been one of the most outspoken defenders of Abu Bakar Bashir, the spiritual head of Jemaah Islamiyah—al Qaeda’s Southeast Asian franchise. Nur Wahid is also the former head of the Justice and Prosperity Party (PKS), which threatens to import a more subtle form of radical Islam to Indonesia—and which is rising rapidly. In the seven years since it was founded the Justice Party has emerged as the country’s most disciplined political force. In last year’s election it won nearly 7.5 percent of the vote and 45 seats, making it the seventh-largest party in Indonesia’s parliament. 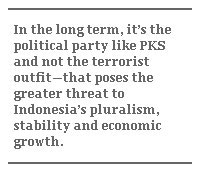 The Justice Party has built a reputation for incorruptibility, devotion to social work and attachment to Islamic causes. Few know that it draws its ideology and organizational structure from Egypt's Muslim Brotherhood—whose vision spawned radical Islamist movements like Hamas, Sudan’s National Islamic Front and (most famously) al Qaeda. While Jemaah Islamiyah stands for suicide bombings, the Justice Party believes in peaceful protests. Yet both subscribe to the same fundamentally anti-modern worldview. Indeed, in the long term, it’s the political party—and not the terrorist outfit—that poses the greater threat to Indonesia’s pluralism, stability and economic growth.

The magnitude of that threat is most clear in the ideology of the Justice Party's greatest political inspiration, the Muslim Brotherhood. The Brotherhood's ideology is encapsulated in its slogan: “Allah is our objective. The Prophet is our leader. Koran is our law. Jihad is our way. Dying in the way of Allah is our highest hope.” The movement's most influential thinker was the virulently anti-American Egyptian literary critic Sayyid Qutb (1906-1966). For him, as for Islamists everywhere, God’s laws (sharia) were superior to man’s laws. Islam belonged everywhere: in the classroom and the boardroom; in banks, in courts, in movie theaters.

On the face of it you couldn’t seem to find less promising ground for militant Islam than Indonesia. Indonesian Islam has long been famed for an easygoing approach to the faith that incorporates elements of Hinduism and Buddhism, which preceded Islam on the archipelago by more than a millenium. Over the past three decades, however, Indonesia’s fabled heterodoxy has faded. During his 32-year rule anti-communist strongman General Suharto enforced uniform religious education in schools. At the same time, petrodollars from Saudi Arabia and the Gulf financed mosques and preachers demanding a “purer” reading of Islam. The Internet and desktop publishing imported the discourse of Riyadh and Tehran to Java, Sumatra and Sulawesi.

It was against this backdrop that Qutb’s ideas reached Indonesia in the late 1970s., Activists linked to the Saudi-sponsored Islamic World League began indoctrinating small groups at the prestigious Bandung Institute of Technology with Brotherhood materials. Like the Brotherhood, these groups organized in secret cells, each with a leader and between five and fifteen members. They met once a week to discuss Islam and to learn how to develop a proper “Islamic personality, ” studying the works of al-Banna and Qutb. The movement was called Tarbiyah, Arabic for education. 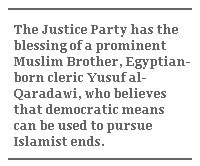 Indonesia was rapidly urbanizing in the 1980s. Many college students were the first in their families to acquire a higher education or to live in a city. Tarbiyah gave its members a sense of purpose and dignity; simple ideas of right and wrong; a framework for understanding the changes taking place around them. By the early 1990s it controlled student movements in virtually all of Indonesia’s largest public universities. With the end of the Suharto era in 1998, the first generation of Tarbiyah activists emerged in the open and formed the Justice Party. In 1999 the new party won only 1.4 percent of the vote—below the 2 percent threshold to participate in the next election. Undeterred, it simply sidestepped the law by changing its name to the Justice and Prosperity Party.

The party’s top leadership is steeped in Brotherhood ideology. Nur Wahid, who resigned from the party chairmanship last year to take his present position, holds a B.A., M.A. and Ph.D. from the Brotherhood-founded University of Medina in Saudi Arabia. Party Secretary-General Anis Matta graduated from the Jakarta branch of Riyadh’s Al-Imam Muhammad bin Saud University, also linked to the Brotherhood. The party has the blessing of today’s most prominent Muslim Brother, the Egyptian-born cleric Yusuf al-Qaradawi, who believes that democratic means can be used to pursue Islamist ends. He has visited Indonesia several times over the last twenty years and is quoted in the Justice Party’s founding manifesto.

The party has grown from 60,000 members in 1999 to between 400,000 and 500,000 in 2004.What explains its extraordinary success? For one, it is the only party in the country based on a network of tight-knit cadres. These well-trained party workers, many graduates of technical and scientific departments, tend to be driven and organized. The party also takes its self-image as an agent of moral reform seriously. It’s virtually impossible to find a Justice Party member who smokes or a female party member without the headscarf. When there’s a natural disaster such as last year’s tsunami, party cadres are among the first volunteers at the scene.

Of the two, the Justice Party is by far the larger threat to Indonesia. With its suicide bombings Jemaah Islamiyah has set itself up for a confrontation with the government that it cannot hope to win. In contrast, the Justice Party uses its position in parliament and its metastasizing network of cadres to advance the same goals incrementally, one vote at a time. At the same time, by throwing its weight behind Jemaah Islamiyah's Bashir, the party complicates the government’s efforts to crack down on terrorists. Indeed, peaceful methods aside, the Justice Party's success can only help terrorists: the more people who believe that the problem with society is too much modernity, and that a purified Islam is an answer to twenty-first century problems, the more likely it is that hotheads among them will use terrorism to achieve their goals.

Ultimately, Indonesians alone will decide whether their future lies with the rest of Southeast Asia, or with a backward-looking movement cloaked in religious fundamentalism The Justice Party remains on the march. How far it goes may well determine Indonesia’s future.