The Internet: China’s Window to the World

Why would the Communist Party, which attempts to censor all media in China, allow and even encourage Chinese citizens to surf the internet? So that people can explore the world, of course! Helping Chinese people learn about the world is the big goal, according to President Jiang Zemin. But the cat-and-mouse game played by censoring authorities and news-hungry Chinese reveals the tensions inherent in trying to open the window but keep the bugs out. A recent shutdown of the popular search engine, Google, showed to the world that Chinese censors haven't given up attempting to filter out potentially subversive messages and other sorts of 'unhealthy' information. Nonetheless, the popularity of the web is only growing, and Chinese people of all ages continue to eagerly explore foreign websites. - YaleGlobal

The Internet: China's Window to the World 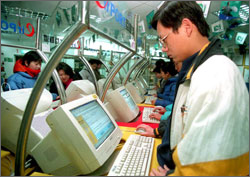 Last summer, when George Vradenburg, former AOL vice president, asked President Jiang Zemin if the Chinese government really encourages people to get online, he must have already known the answer - Yes. Without government encouragement, China's Internet users would not have grown to almost 46 million people since late 1995, when ChinaNet began providing commercial Internet access in Beijing. And without government encouragement, Chinese people would not be the second-largest population of Web surfers, behind Americans, either.

But the really important question is this - Why does the Chinese government encourage people to get online? President Jiang said that the purpose of encouraging people to get online was to enable more people to learn about the world, rather than to help boost economic efficiency or commercial development, the answer Mr. Vradenburg probably expected.

The Internet does indeed help Chinese people learn about the world. Shortly before President Jiang met George Vradenburg in Beijing, the Center for Studies in Social Development at the Chinese Academy of Social Sciences (CASS) released its Internet survey report in April 2001. Directed by Prof. Bu Wei and myself, the survey showed that adult Internet users spend about 9% of their online time on foreign language content and almost 15% of their time on Chinese-language content provided by foreign-based websites. That is to say, Chinese adult users spend as much as one fourth of their online time learning about the outside world. Teenagers are even more curious about global information. They spend 15% of their Internet time viewing foreign language content and 25% of their time on Chinese-language sites hosted outside China.

There is no doubt that the Internet can provide more information about the outside world than traditional media. Otherwise people would not spend so much money, time and energy getting online. For example, after a Chinese fighter jet and an American surveillance plane collided in Hainan, the US government said "Sorry" for the death of a Chinese young pilot. Questions quickly arose over how to translate 'sorry' into Chinese. The official Chinese translation sounds like 'apology', but that meaning was denied by the US government. To help people make their own judgments on what happened, most Chinese online news providers reported not only the official Chinese translation but also the original English version, plus explanation of the differences. Traditional media simply repeated the 'apology' translation offered by the government.

For Chinese people, the Internet also provides a virtual meeting space, a place where people can speak out about things that they cannot normally discuss in public. The most popular website for the Chinese people to talk about current events and politics is "Strong China Forum (SCF)", run by the Communist Party-owned People's Daily newspaper. Only 17 minutes after the September 11 terrorist attack on the World Trade Center in New York, the first message telling people what had happened was posted to SCF by someone in Hong Kong.

Before September 11, an average of some 4,000-5,000 messages per day were posted on the People's Daily forum. But in the first 24 hours after the terrorist attack, over 12,000 messages were posted. While most Americans got their news about the terrorist attacks from television, quite a lot of Chinese people learned of the tragedy from the Internet. Traditional media did not work nearly as quickly or as well on the issue. Aside from a Hong Kong based TV program, Phoenix, and a few local television stations such as the Hunan Satellite TV channel, which reported the tragedy over and over again, China Central Television (CCTV) reported the news only several minutes per hour. Unlike Internet Bulletin Board System (BBS), which can keep the messages all the time allowing people to read, the TV news just showed for a while and then disappeared. If people did not watch during those few minutes, they had to wait another hour.

The CASS Internet survey found that almost 60% of Internet users access the Internet regularly to read news second in popularity only to checking email. This must be one of the reasons why the most popular website in China is not a business-oriented one like Yahoo, Amazon or E-bay, but Sina.com, a well-known news provider. 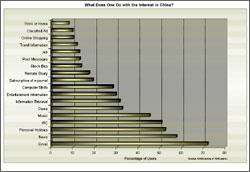 Graph shows what one does with the Internet in China. Enlarged image

Openness to the outside world and the popularity of accessing news sites, of course, do not mean that the government does not care what Chinese people are reading. Control over the dissemination of "harmful information" is felt to be necessary. In September, just as I was finishing up writing this article, I discovered that the web's most popular search engine, Google, could no longer be accessed from China. Most of my friends felt very sad, or even angry. But there are several different ways to access the information online. Proxy servers, for example, can help Internet users to get over the "Great Fire Wall". Email forwarding systems also work well. I received a message, forwarded by a friend, that listed 10 IP addresses that could directly access Google. This is one popular way for Chinese people to get to the news that they cannot access via traditional media. In the CASS survey last year, we found that Internet users, on average, forward one piece of news each week to someone else. Peer-to-peer technology is even harder to monitor. People can also contact each other directly, using online chat programs such as ICQ or OICQ, which allows them to share information and points of views privately. Dramatically, Google came back after 11 days, without any explanation, and just as quietly as it had disappeared. 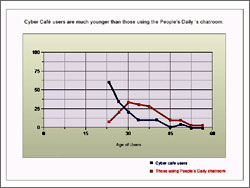 The government shutdown of cyber cafés in China is another example. But shutting down cyber cafes is not really about controlling political activities online. All the computers in a given cyber café are connected on a local area network (LAN), and the system operator can easily trace users' activities. No one wants to get into political trouble in a cyber café. Actually, those who use the Internet in cyber cafes are different from those who are concerned about politics. Cyber café users are most likely younger and don't have enough money to buy a computer at home. In most cases, they just play games or chat with strangers. From May 9 to June 9, 2001, an online survey was made by SCF and 1,096 completed questionnaires were received. Compared with the users of the People's Daily's chatroom Strong China Forum users, cyber café users in the CASS survey are much younger.

The following graph, shows the age difference between cyber café users and those of Strong China Forum Aside from the well-publicized fire in an un-registered Beijing cyber café, the shutdown came about largely as a response to Chinese parents worried about the safety of their 'little emperors'. Parents don't know what their children do in cyber cafés, but they fear media reports of bizarre things such as someone going mad after staying in a cyber café playing games for several days. The local governments just want to keep things simple, so when parents or media complain about cyber cafés, they shut them down.

The result of shutting down cyber cafes seems mainly economic. Although there are almost 46 million Internet users in China, the number of computer hosts is only 16.13 million, as reported by CNNIC, the agency that offers official statistics on Internet use in China. That is to say, at least two-thirds of Internet users in China do not have their own computers. These people must access the Internet in public places. Most of them choose cyber cafés because the Internet access there is cheap and fast, and whenever they have problems, the staff can help them. In Beijing, though, only about 30 legal cyber cafés survived the shutdown, out of the more than 2,200 unregistered ones that previously operated. Given this massive decrease in facilities, most Internet users can no longer enjoy surfing online in cyber cafés . Some of them, though, are taking the plunge and purchasing their own computers.. In Zhongguancun, an area of Beijing nicknamed 'the Chinese Silicon Valley', computer sales were reportedly growing faster soon after the shutdown of cyber cafés.

For those youngsters without money to buy their own computer, another option - even less desirable to the parents - has been to go to some small cities nearby, where cyber cafes are subject to less control. Their parents do not even know where they are going. Despite these efforts to stay connected, Internet traffic has been reduced since the shutdown. One newspaper, MARKET, estimated that Chinese Internet service providers have already lost at least 120 million Yuan (about 15 million US dollars) in income due to the shutdown.

To keep the economy growing fast while keeping society stable is a difficult task. Fortunately, Chinese people have been quite lucky on the road to social and economic reform. To make changes in society, the first thing to do is to open people's minds and let them learn something new. The Internet has allowed Chinese people to see the world in ways that traditional media cannot. Although there may be a cat-and-mouse game, what is truly important is that in playing the game both sides have learnt something. As it stands now, the Chinese "door" has not been completely opened, but thanks to Microsoft and others, there are "Windows" through which Chinese people can see where the road may lead. Once these windows have been opened, they can no longer be closed.

© Copyright 2002 Yale Center for the Study of Globalization