An online petition protesting Japan's bid for a permanent UN Security Council seat has reportedly garnered over 22 million Chinese signatories. And as anti-Japanese discourse grows ever-more incendiary in cyberspace, the Chinese government may wonder how far "power to the people" should go. Journalist Paul Mooney writes that Beijing truly finds itself in a bind: While condoning internet campaigns may have served as a silent threat to its island neighbor, it is proving to be costly. As Mooney writes, "Should petitioners force Beijing to veto Japan's Security Council membership, this energy could then be easily turned inward, to sensitive domestic issues." The stakes have increased recently, as Chinese protesters recently took to the streets, attacking Japanese-owned businesses. But with state-controlled media limiting access to outside information, could Beijing be battling a beast of its own creation? – YaleGlobal 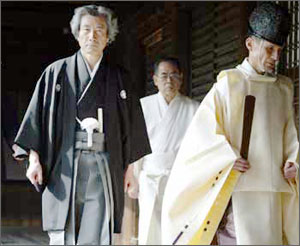 Shadow on a shrine: Japanese Prime Minister Junichiro Koizumi's annual visit to Yasukuni Shrine to honor the war dead, roils relations with China and other neighbors

At the dawn of the Internet Age, many visionaries predicted that the rising tide of global interconnectedness would gradually eliminate sovereign borders and nationalism. The experience of China, which today is more open than in anytime in the past, however, belies that expectation. Highly connected and internet-savvy Chinese youth today have emerged as virulent nationalists, hampering the government's attempt at better relations with Japan. Meanwhile, rising Japanese nationalism is adding fuel to the fire.

Anti-Japanese sentiment among younger people here is unprecedented – and increasing significantly. Ironically, China's opening up and the internet are playing a key role in this trend.

The best illustration is the ongoing cyber-roots campaign against Japan's bid for a permanent seat in the UN Security Council. Organizers of a petition, which started among Chinese in the US, originally hoped for one million signatories. However, due to internet popularity in China, the figure, the organizers claim, has already surpassed 22 million. Petitioners hope their pressure will force Beijing to keep Japan out of the Security Council – a move that would seriously damage already worsening relations.

Chinese nationalists have taken advantage of the limited free space on the internet to express their anger toward Japan. They have advocated boycotts of Japanese goods, denounced Japan in chat rooms, and sought to alter the government's policies toward Japan.

The Western media has been quick to point an accusing finger at the Chinese government for failing to rein in anti-Japanese sentiments, accusing it of fanning the flames of nationalism in an attempt to shore up its own legitimacy. Experts on Sino-Japanese relations insist that the government is, indeed, worried about the current trend, but fears that appearing weak-kneed vis-à-vis Japan will damage Party legitimacy. The web is closely monitored by the government, which has shut down sites for going beyond permissible limits. But curbing anger against Japanese poses a new challenge.

While the government routinely deals harshly with dissident behavior, the Japan question appears to be its major vulnerability. Last year, anti-Japanese outbursts on the country's fiercely nationalist web sites led Beijing to reluctantly take a tough stance when Japan arrested seven Chinese activists for illegally sailing to one of the contested Senakaku Islands. Angry postings flooded the internet, calling for a hard-line approach against Japan. Though the government had hoped that the case would fade quickly, it allowed protesters to demonstrate in front of the Japanese consulate for several days. And when a nationalist web site actively protested a hefty purchase order for high-speed trains from Japan, the web site was shut down – and the deal seems to be in trouble.

Jiang Wenran, professor of political science at the University of Alberta, Canada, says that while Beijing has not made an effort to shut down the online petition drive, the government is not encouraging it. "The order is out to lead it in a moderate way," he says.

Chinese observers say there's no real incentive for the government – or Japan, for that matter – to allow relations to further deteriorate. Furthermore, the Communist Party is well aware that nationalism can be a double-edged sword: Should petitioners force Beijing to veto Japan's Security Council membership, this energy could then be easily turned inward, to sensitive domestic issues.

Several signs suggest that Hu Jintao has actually tried to create a constructive environment for improving Sino-Japanese relations. For one, he put moderates in charge of the country's Japan policy, and appointed one, Wang Yi, as the new ambassador to Tokyo.

Two years ago, the government also quietly looked the other way when Ma Licheng, a well-known commentator for the People's Daily, published an article in Strategy and Management magazine, criticizing ultra-nationalist views of Japan and calling for "new thinking" in China's Japan policy. He urged Chinese to forget about history and to focus on normalizing ties with Japan. (A source close to Ma says he may have indirectly been nudged to write the article by people with close ties to the top leadership, an attempt to break the ice with Japan.) The daring article was followed by a rare and lively public debate among academics, researchers, and journalists about the direction of China's Japan policy.

Unfortunately, the Japanese government failed to respond to China's gestures. Prime Minister Junichiro Koizumi continued to ignore Chinese sensitivities by visiting the Yasukuni Shrine, a Shinto shrine in Tokyo dedicated to fallen Japanese soldiers – including a handful declared by the allied powers to have been war criminals during World War II. Rather than making some kind of goodwill gesture to China or ceasing visits to the shrine, Japan cut the floor out from under Chinese advocates of new thinking, who were already under fierce pressure from nationalists at home.

Shi Yinhong, professor of political science at Renmin University, says that it is now much more difficult for anyone to advocate a more balanced view of relations between the two countries. Unfortunately, thinking is changing drastically among some sectors of the public in both countries, making it increasingly difficult to put relations back on track.

There was a time when Tokyo, still feeling guilty over World War II, reflexively deferred to Beijing – but no longer. Japan's new leaders say it's time to leave history behind and become a "normal" country. And it seems to have a good degree of public support.

Chinese attribute this partially to China's growing economic and political influence in the region. "Japanese feel that China is developing quickly and getting stronger," says Ma Ling, a well known news commentator who studied in Japan, "and they're worried about this."

In recent months Japan has taken a number of steps that have enraged China's leaders. These include a new security agreement with the United States, wherein the two pronounced Taiwan a "common strategic concern." Also, Tokyo announced its intent to cancel soft loans to China beginning in 2008 and published a white paper naming China as a threat.

On the positive side, a Chinese scholar who closely follows Sino-Japanese relations says that Koizumi has reached an implicit agreement with China's top leaders that this year will be too sensitive for bilateral relations to make a visit to Yasukuni. If true, this could pave the way for the resumption of visits between the leaders of both countries.

Meanwhile, a new generation of Chinese is taking pride in China's growing international status, and they're itching to stand up against Japan. "Younger Chinese have a different sense of power than past generations," says Shi. "They see China getting stronger and Japan relatively weaker."

The government's worst fears came true over the weekend as news reports said 10,000 Chinese demonstrated in Chengdu, Sichuan province, on Saturday, with some attacking a Japanese-owned supermarket. On Sunday, an estimated 3,000 protesters damaged two Japanese department stores in Shenzhen, in the south. Meanwhile, local businesses in Northeast China began pulling Japanese products off their shelves.

What began as hyperventilating in cyberspace has now spread to the streets. It's still not clear whether the government condoned the increasing online anti-Japanese sentiment out of fear of domestic criticism or to pressure Japan. But as the recent dilemma with Japan shows, riding the internet can be like riding a tiger: Once you get on, it can be very hard to get off.

Paul Mooney, a freelance journalist, has been reporting on China for 15 years.