China’s expansive claims over the South China Sea and ongoing aggression push Vietnam to consider filing a suit with the Hague for violating the UN Convention on the Law of the Sea. The international court has already ruled that China’s claims are overly expansive, but the country has not complied. In July, Chinese survey ships entered Vietnam’s Exclusive Economic Zone and disrupted oil drilling operations in Vietnamese waters. “Vietnam fears the ultimate goal of the Chinese operation is to coerce claimant countries like Vietnam to become junior partners, by accepting joint explorations with China in all of the South China Sea,” explains Nayan Chanda, YaleGlobal’s founding editor, in his column for the Times of India. Vietnam’s leaders are currently seeking foreign investment and try to tamp down hostility against foreigners while some former officials grumble about the government response. Vu Ngoc Hoang, a former senior party official, has urged Vietnam’s current leaders to consider a military alliance with the United States. For 2019, Global Firepower ranks China’s military as third most powerful in the world and Vietnam’s military as 23rd, and the assumption is that only the US with the world’s most powerful military can block China’s intrusion. – YaleGlobal

China’s aggression in the South China Sea and rejection of international rulings may spur Vietnamese leaders to consider military alliance with the US
Nayan Chanda
Monday, October 28, 2019

Read the article from the Times of India about China disrupting Vietnam’s oil operations and some Vietnamese considering an alliance with the US.

Nayan Chanda, founding editor of YaleGlobal Online, is a US-based journalist who writes columns for the Times of India. 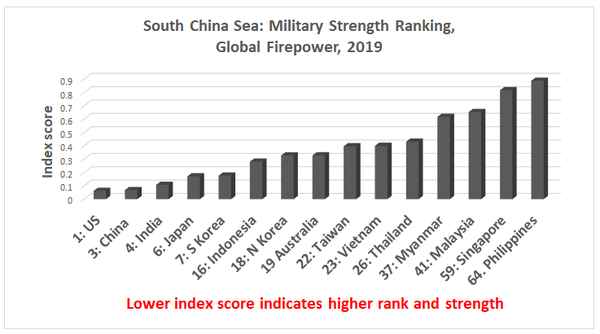 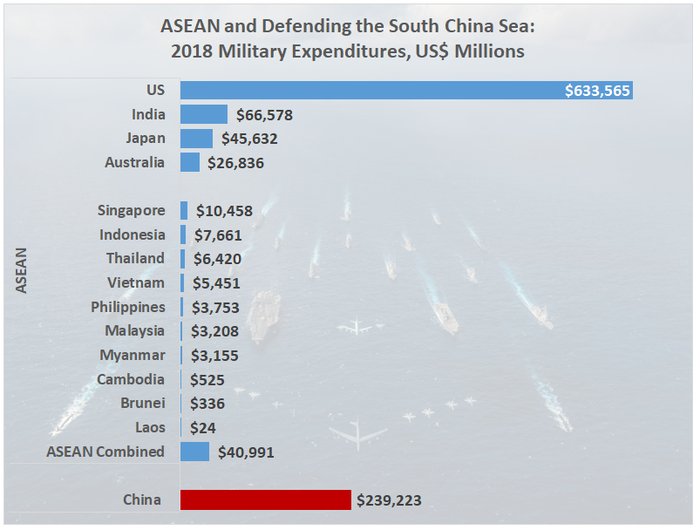 The 2018 military expenditures of ASEAN nations combined, along with those of Japan, Australia and India do not add up to China’s total (Data Source: Trading Economics and SIPRI; photo of USS Ronald Regan aircraft carrier and Japan’s Maritime Self-Defense Force helicopter destroyer)