The Invisible Hand of Globalization

Despite exponentially-advancing understanding of economic forces over the 20th century, Adam Smith’s invisible hand continues to elude. In his recently published book none other than former Chairman of the US Federal Reserve Alan Greenspan essentially throws up his hands. Every time a financial crisis hits the world, like the current turmoil caused by sub-prime mortgage lending in the US, calls rise for greater regulation. But Greenspan suggests that governmental regulation of the global markets would carry little effect. Markets move too fast for regulation to ever be up to date. Problems emerge quickly, and conditions change by the time a new policy is formed. The very laws of supply and demand resolve most imbalances on their own without intervention. YaleGlobal Assistant Editor Susan Froetschel reviews Greenspan’s stance on globalization, as presented in his book, “The Age of Turbulence: Adventures in a New World” – and the many challenges confronting regulators who attempt to bring globalization to its heels. Despite his cautions on regulation, Greenspan does see a role for government in the realm of global economic policy. – YaleGlobal

The Invisible Hand of Globalization

Billions of economic decisions from entrepreneurs, consumers and investors are a force beyond the control of regulators
Susan Froetschel
Thursday, January 3, 2008 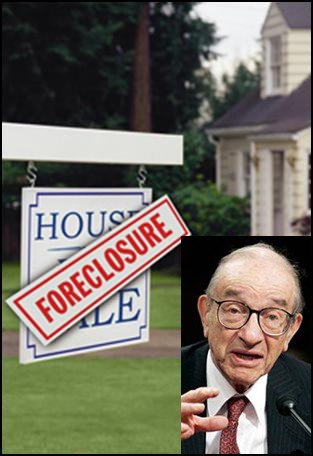 No control: Alan Greenspan (insert) argues that regulators cannot protect consumers from bad decisions, even as US families lose homes

In his recent book “The Age of Turbulence: Adventures in a New World” Alan Greenspan makes a compelling case for why global regulation of the financial markets would offer no relief.

The global markets, huge in size, with billions of transactions, move with too great speed for meaningful intervention by regulators. But that does not preclude international cooperation. Regarding globalization, two strands – almost contradictory – emerge in the book by the former chairman of the US Federal Reserve: first, the increasing irrelevance of central bankers in monitoring the markets, let alone controlling them, and second, the power of cooperation.

For Greenspan, the stress of international competition is not much different from that of domestic competition, except for greater speed and size. Regulation is supposed to order the markets, prevent panics, present a fair playing field and prevent fraud. It cannot protect consumers or businesses from bad decisions. Global markets expand the number of competitors for any job, contract or product; consumers and producers have unprecedented access to information on prices, conditions and quality.

Thus, Greenspan warns that international trade can be brutally unkind to the inefficient that waste resources. Consumers and politicians, worried about the speed of change and the potential for any crisis spreading via intricate linkages, may see chaos in global markets, but Greenspan sees balancing forces. “Even in crisis, economies seem inevitably to right themselves (though the process sometimes takes considerable time,” he writes. Crisis for one becomes an opportunity for another. “The scramble by market participants to seize those opportunities presses prices, exchange rates, and interest rates back to market-appropriate level,” Greenspan writes.

Greenspan urges limited regulation for several reasons. Often, regulators don’t know the source of a problem until long after the crisis is underway. Greenspan’s book repeatedly relies on words like “puzzling,” “surprising,” “mystery,” “conundrum” and “irrational” to describe events that emerge for no reason or don’t respond to economic intervention. “Unexplainable market episodes are something Fed policymakers have to deal with all the time,” said Greenspan, adding that the central bankers have a limited set of tools. For those who demand that financial policy rigidly conform to benchmarks, he urges flexibility: “Too often we have to deal with incomplete and faulty data, unreasoning human fear, and inadequate legal clarity,” he writes. “As elegant as modern-day econometrics has become, it is not up to the task of delivering policy prescriptions. The world economy has become too complex and interlinked.”

Economic history warns against attempts to provide rescue for every problem. If regulators assist every industry that takes on more debt than it can handle or makes bad business decisions, the intervention can encourage more reckless risk-taking. “Since markets have become too complex for effective human intervention, the most promising anti-crisis policies are those that maintain maximum market flexibility – freedom of action for key market participants such as hedge funds, private equity funds, and investment banks,” Greenspan writes.

Regulators cannot possibly monitor every cross-border transaction. No nation can hope to rein in the forces of globalization. “Regulators can still pretend to provide oversight, but their capabilities are much diminished and declining,” admits Greenspan. Innovative financial tools increase risk, speed and complexity, but also provide targeted investment and increased efficiency and liquidity, particularly in new fields. For example, the speed of modern transactions would make a global reporting system of hedge-fund positions futile, he explains, adding “No wonder this global behemoth stretches beyond the full comprehension of even the most sophisticated market participants.”

Reinforcing the success of free-market capitalism was the break-up of the Soviet bloc in 1991, Greenspan suggests. Yet that development left Western central bankers feeling “impotent” about imbalances building for four decades and a crumbling infrastructure that lacked institutions for handling basic financial transactions. Developing nations, once communist, turned to market capitalism with enthusiasm, and globalization pushed forward in a great wave of momentum as multinational firms discovered locales with low wages and skilled workers. Prices declined and inflation vanished temporarily as central bankers’ leading concern.

But globalization’s most recent wave, with all its gains, will eventually slow. “It is difficult to determine how long today’s globalization dynamic will take to play out,” writes Greenspan. “And even then we have to be careful not to fall into the trap of equating the leveling-off of globalization with the exhaustion of new opportunities for investment.”

With the inevitable slowdown, some groups can’t help but feel deprived about the end of a spending spree. “History warns us that globalization is reversible,” Greenspan writes. “A worldwide debate is under way on the future of globalization and capitalism, and its resolution will define the world markets and the way we live for decades to come.”

Globalization comes in many forms, and international cooperation on financial matters can smooth out the imbalances, rough edges or lurching reversals that stem from natural disasters, major defaults, panics or creative destruction as new inventions make some businesses obsolete. Members of groups like the G8, the International Monetary Fund and the World Trade Organization benefit from a lively exchange of ideas, accounting standards that provide accurate data and coordination of strategy in responding to crises.

Greenspan and other Federal Reserve economists recognized the global intricacy behind any crisis in 1997-98, after Russia defaulted on its dollar debt. That crisis, triggered by a drop in the price of oil, had the potential to wreak global havoc, according to Greenspan, and prompted “major rethinking” at the Federal Reserve, along with the recognition that financial pressures were global in scale and “the effort to contain them would have to be global, too.” He embarked on a series of speeches that rejected US exceptionalism. “It is not credible that the United States can remain an oasis of prosperity unaffected by a world that is experiencing greatly increased stress,” Greenspan said in a 1998 speech. Countries that rely on trade must worry about the standard of living for any of their trading partners.

Building on cooperation, governments can devote surpluses to purchasing “greater civility,” as Greenspan puts it, building infrastructure, improving education or protecting the environment. Governments and consumers can set priorities and reveal values with spending.

Political cooperation – legislation that establishes strong property rights, state-of-the-art education and systems of fair play, with transparent rules – also contributes to sustained prosperity. Government can do more to combat fraud. “I am coming around to the conclusion that the success of five- and ten-year economic forecasts is as much dependent on a forecast of the degree of the rule of law as on our most sophisticated econometrics,” Greenspan comments in a footnote.

The economist concludes that education, the rule of law, democracy and other forms of social cooperation offer greater protection from fast-moving global markets than regulation. Like economics, globalization is yet another invisible hand, the sum total of billions of daily economic decisions from entrepreneurs, consumers and investors. How global citizens reflect their exuberance, fears and hope is a force beyond the control of any group of regulators.

Susan Froetschel is assistant editor of YaleGlobal Online. Alan Greenspan’s “The Age of Turbulence: Adventures in a New World” was published by the Penguin Press in 2007.