Saddam Hussein’s dictatorship in Iraq relied on mass murder, torture and chemical warfare against its own citizens. He was also the last of several Iraqi rulers who elevated the Sunni minority at the expense of the Shiite majority. During the years of repression, the Shiite sect in Iraq sought refuge in the mosque, much like their spiritual brethren in Iran, who became more devout during the reign of the authoritarian shah. So when the US invaded Iraq, deposing Saddam in 2003, it was inevitable that Shiites would play a larger role in the new government. But as author Dilip Hiro notes, this new government, reflecting the will of the newly empowered majority, also moved toward rapprochement with Iran, a consequence evidently unforeseen by the US. Recently, Iraqi Prime Minister Nouri al-Maliki and other government officials visited Iran, expressing hope for closer relations. And Iran has extended offers to train the fledgling Iraqi army. The long-term effects of any closeness between the two governments, while unclear, surely bode ill for the US goal of creating an Iraqi regime, democratic in outlook as well as in composition. After all, there is a cruel irony and perhaps inevitability about the ties between the governments of Iran and Iraq: Both regimes, formed as a direct or indirect result of US intervention in the Middle East, claim to represent the true wishes of the Shiites. After centuries of suppression in Iraq, many Shiite voices speak out in favor of the Iranian model. Whether the world soon takes to calling Iraq an “Islamic Republic” remains to be seen. – YaleGlobal 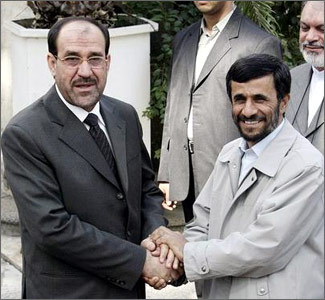 LONDON: Unnoticed by most Americans, while US President George W. Bush extolled Iraq as “a young but hopeful democracy” with a “unity government” in his national television address on the fifth anniversary of 9/11, Iraq’s chief executive, Nouri al-Maliki, was hobnobbing with the leaders of Iran, a member of Bush’s “Axis of Evil.”

On the eve of his meeting with Iran’s Supreme Leader Ayatollah Ali Khamanei – a rare honor for a visiting dignitary – Prime Minister Maliki called the Islamic Republic of Iran “a good friend and brother.” Such a statement runs counter to Bush’s policy of isolating Iran from the international community by focusing exclusively on Tehran’s uranium enrichment. At the same time it illustrates that the regimes deriving legitimacy from different versions of democracy in the Middle East can be warm friends.

Maliki followed the footsteps of his predecessor Ibrahim al-Jaafari, who led a delegation of 10 cabinet ministers during a Tehran visit a little more than a year ago. Both Maliki and Jaafari are leaders of the Islamic Daawa, a Shiite religious faction that found refuge in Iran during the Iran-Iraq War in the 1980s.

Jaafari’s state visit to Iran was preceded by his Defense Minister Sadoun al-Dulaimi, a Sunni Arab. “I have come to Iran to ask forgiveness for what Saddam Hussein had done [to Iran],” Dulaimi said. “Iraq will not be a source of insecurity and instability for any of its neighbors.”

The process of reconciliation between the two neighbors began in May 2004 when Iranian Foreign Minister Kamal Kharrazi arrived in post-Saddam Baghdad to meet his Iraqi counterpart Hoshiyar Zebari, a Kurdish leader who had collaborated with Iran against Saddam during the 1980-1988 Iran-Iraq War. They issued a joint statement: “Saddam committed aggression against Iran [in 1980], Kuwait [in 1990] and against the Iraqi people.”

Dulaimi built on the foundation laid by Zebari and Kharrazi during his July 2005 trip when he met Iranian counterpart Ali Shamkhani. At a joint press conference, he announced that a mutual military and anti-terrorism cooperation agreement would include Iranian help with training Iraq’s reconstituted armed forces.

This came as a nasty shock to the Bush administration. To have a member of its self-declared Axis of Evil involved in training Iraq’s emerging military – a project monopolized by the Pentagon – was unacceptable. Its unrelenting pressure on the Iraqi government resulted in the collapse of the proposed Baghdad-Tehran defense cooperation pact. 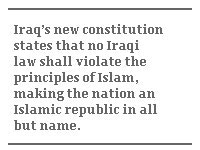 Even so, the underlying dynamic of closer ties between the two countries remained intact. Indeed it received a boost when in the general election held under Iraq’s new constitution in January 2006 resulted in the United Iraqi Alliance (UIA) of Shiite religious parties winning 80 percent of the seats reserved for Shiites.

Earlier the UIA had succeeded in inserting a clause in the new constitution stating that no Iraqi law shall violate the principles of Islam. This makes Iraq an Islamic republic in all but name.

Significantly, the first foreign leader greeted by the Maliki government, installed on May 20, was Iranian Foreign Minister Manuchehr Mottaki. He met Maliki as well as Zebari, who retained the foreign ministry in the new government.

“We do not want WMD [weapons of mass destruction] next door, but Iran’s program is for peaceful purposes,” said Zebari. “We believe in the wisdom of the Islamic Republic leadership in handling the subject, and we are against any tension with the Islamic Republic.”

Though a Sunni and a leader of a secular faction, the Kurdistan Democratic Party (KDP), Zebari was acutely conscious of the 750-mile border that Iran shares with Iraq, part of it along Iraq’s Kurdistan region. That enabled Iran to help the militias of KDP and the Patriotic Union of Kurdistan to liberate a third of Kurdistan from Saddam’s rule during the Iran-Iraq War.

Zebari seemed equally conscious of the sectarian affinity existing between Shiites in the two nations, with theological links between the Shiite holy cities of Najaf, in Iraq, and Qom, in Iran, going back centuries. 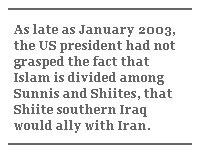 That crucial historical factor loomed large before US President George Herbert Walker Bush after the 1991 Gulf War and led him to deny support to the anti-Saddam Shiite uprisings in southern Iraq. He realized that, freed from Saddam’s dictatorship, the overwhelmingly Shiite southern Iraq would ally with Iran. Tehran’s influence would thus extend to the oil-rich monarchies of Kuwait and Saudi Arabia.

In stark contrast, it now transpires that, as late as January 2003, his president son, George Walker, had not grasped the fact that Islam is divided among Sunnis and Shiites.

Bush Jr. was not alone among the top policymakers in Washington who never bothered to grasp the salient points of Iraqi history and culture. Instead, they accepted unsubstantiated assertions of anti-Saddam exiles that the Iraqi people were predominantly secular.

Until 1638, Mesopotamia, consisting of the Arab region of modern Iraq, changed hands between the Shiite Persian Safavid Empire and the Sunni Ottoman Turkish Empire. Under the Safavids, Sunnis suffered persecution. Once the Ottomans had finally annexed Mesopotamia in 1638, the majority Shiite community became the underdog.

This continued after the dissolution of the Ottoman Empire after World War I and the forming of modern Iraq with the addition of the Kurdish majority province of Mosul by the victorious British, who installed a Sunni monarch in Baghdad. The overthrow of the monarchy in 1958 followed by a Baathist military coup in 1967 left intact the historic subordination of Shiites. Like subjugated groups elsewhere, Shiites found solace in religion, becoming more devout than their Sunni counterparts.

With the jack-boot of the Baathist dictatorship lifted and the principle of one person, one vote, applied strictly, as planned by the Bush administration, Shiites were bound to be in the driving seat, with most opting for an Islamic state.

As for Iran, US policymakers seem oblivious that the theocratic regime in Tehran that they detest is the end-result of the actions taken by Washington.

After World War II, Iran was poised to evolve into a secular, multiparty democracy that would pursue progressive nationalist policies and assume control over the country’s oil.

When in 1951 Prime Minister Mohammad Mossadegh nationalized the petroleum industry – Anglo-Iranian Oil Company, owned and managed by the British – Britain co-opted the US to overthrow the democratically elected government. 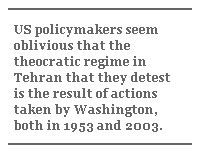 Soon the Central Intelligence Agency took over the task, with the British MI6 as its junior partner, implementing a coup against Mossadegh in August 1953 and unveiling a royal dictatorship under Mohammed Reza Shah. A quarter century later, the Shah’s regime was overthrown by a revolutionary movement consisting of several political forces led by the mosque, the only institution that the Shah, a nominal Shiite, could not curb.

Since then, Shiite clerics have established a political-administrative system that combines rule by Islamic law with a representative government. They claim that the Islamic Republic caters not only to the material needs of its citizens but also their spiritual needs.

It is arguable whether reality matches official claims. But there is little doubt that Iran has tried to fashion its own model of democracy rooted in its history and culture.

In the final analysis, only a home-grown variety of democracy can take root in the countries of the Middle East, not a Jeffersonian model imposed by America. The fallout of the US intervention in Iran 1953 and Iraq 50 years later has virtually ensured rejection of the American model.

Dilip Hiro is the author of “Secrets and Lies: Operation ‘Iraqi Freedom’ and After” and “The Iranian Labyrinth: Journeys Through Theocratic Iran and Its Furies,” both published by Nation Books.