Iran on the Brink

World leaders continue to debate the most effective way to prevent development of Iran's nuclear arsenal. Henry Sokolski, executive director of the Nonproliferation Policy Education Center, argues that the international community must now also address an even more ominous threat of nuclear proliferation throughout the Middle East. This will require instituting - and enforcing - strict rules against violators of the Nuclear Nonproliferation Treaty. Ultimately, however, he writes, the only sure way to lasting non-proliferation will require more moderate self-rule throughout the Middle East. - YaleGlobal

Iran on the Brink

Short of acquiescence or military action, how can the world community respond to Tehran's nuclear ambitions?
Henry Sokolski
Wednesday, September 22, 2004 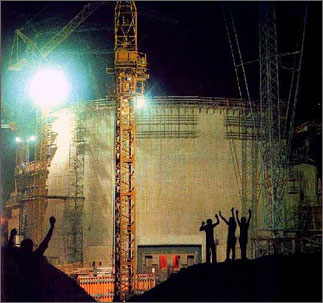 Damage control: Workers try to finish a nuclear reactor in Bushehr, Iran. The US and UN must prevent similar scenarios elsewhere.

WASHINGTON: This weekend, the UN's nuclear watchdog agency called on Tehran to freeze its efforts to produce nuclear fuel, since this would enable Iran to come within days of having a nuclear arsenal. On one side, the US and its allies want Iran to restrain its declared nuclear activities. On the other, Iran and its supporters insist that they have the right to pursue them all. Although it's unclear who will win, what's not is that the dispute is forcing all sides back to square one. At stake is the future of international nuclear controls, as well as any hopes of keeping the Middle East from following Iran's nuclear example.

Unfortunately, these risks are not yet well appreciated. When it comes to Iran's nuclear ambition, everyone, both hawks and doves, Europeans and Americans, is in some form of denial. They all still believe that there is some way to keep Iran from coming within a few weeks of having a nuclear bomb. Iran, however, is no more than 12 to 36 months from acquiring nuclear arms, possesses technology and material to produce them, and seems dead set on securing an option to do so. US officials insist that Iran has begun testing non-nuclear weapons components. Preventing Iran from building the bomb, therefore, can no longer be assured.

Still, most experts don't perceive this urgency. President Bush's detractors believe Iran's nuclear misbehavior is little more than a misunderstanding. By simply dealing directly with Tehran, they insist, the US can resolve the troubling nuclear ambitions. Washington, they argue, should offer a reliable supply of fresh reactor fuel in exchange for Iran's pledge to refrain from making its own (and thereby coming within days of making a bomb). Never mind that the US has tried and failed over the last two decades to settle an array of matters with Tehran, or that Iran's defiance of a year-old nuclear enrichment freeze agreement has humiliated Britain, France, and Germany. A new US president, according to Bush's opposition, can reverse these trends.

White House officials, meanwhile, insist that Iran, having repeatedly violated the Nuclear Nonproliferation Treaty (NPT), should be hauled before the United Nations Security Council to make sure it doesn't get the bomb. After two years of failed International Atomic Energy Agency (IAEA) attempts to get Iran to come clean, UN action is long overdue. What are the chances that the UN can keep Iran from getting the bomb? Judging from the Security Council's inability to ensure Saddam's compliance with international weapons inspections, hardly as much as one would hope.

This, then, gives rise to the hawkish solution: bombing (with or without UN approval). Israeli or US attack of Iran's nuclear plants, this group insists, is the only hope. Striking Iran's known nuclear plants would at least delay its program a few years, but at what cost? Certainly, any lasting results would require a much larger follow-up "game plan" to overthrow the current regime - an endeavor still underway in Afghanistan and Iraq.

If there is no sure way to prevent Iran from getting within a screw driver's turn from having nuclear arms, what should the international community do? The answer: Tackle the most worrisome preventable problems. This would clearly exclude getting Iran to keep its nuclear materials and capabilities out of the hands of terrorists. This scenario is not only unlikely (Tehran's power-controlling Mullahs are unlikely to allow it), but clearly beyond the scope of international powers.

What, then, deserves greater attention? The one thing that's even worse than a nuclear-ready Iran and that can still be thwarted: an entire Middle East cast in Iran's nuclear mold. Earlier in 2004, senior Saudi officials announced their interest in acquiring or "leasing" nuclear weapons from China or Pakistan (a legal move under the NPT, so long as the weapons remain under Chinese or Pakistani "control"). Egypt, having revealed plans to develop a large nuclear desalinization plant, also recently received sensitive nuclear technology from Libya. Syria, meanwhile, is believed to be experimenting with uranium enrichment centrifuges. And Algeria is in the midst of upgrading its second large research reactor facility, which is still, curiously, ringed with air defense units.

If these states continue to pursue their nuclear dreams (spurred by Iran's example), could Iraq, with its considerable number of nuclear scientists and engineers, be expected to stand idly by? And what of Turkey, whose private sector was recently revealed to have been part of Pakistani proliferator Dr. A. Q. Khan's network? Will nuclear agitation to its south and its repeated rejection from the European Union cause Turkey to reconsider its non-nuclear status? What would happen if, under the pressure of increasing anti-US sentiment in Turkey, the US withdrew its forces, along with the tactical nuclear weapons it has based there?

What can be done to stem these developments?

First, the international community must challenge Iran's claim that its nuclear activities are peaceful and protected under the NPT. No nation that sits on so much oil and gas as Iran does has a legitimate, "peaceful" need to generate nuclear electricity. Consider: Had Iran openly solicited proposals to provide electrical generating capacity, all of the non-nuclear bids would have come in at a fraction of the cost of building nuclear power reactors and fuel production plants. These points need to be hammered home in the lead-up to the NPT review conference next May. Certainly, if the NPT is to prevent nuclear proliferation, it cannot allow nations the right to pursue dangerous, uneconomical nuclear activities that bring them within days of having an arsenal.

Second, the US and its allies should build on France's recent proposals that the UN Security Council adopt country-neutral rules for dealing with NPT violators. These rules should stipulate that countries that reject inspections and withdraw from the NPT (something Iran has threatened to do) without first addressing their previous violations must surrender and dismantle their nuclear capabilities (especially large research and power reactors and bulk handling facilities) to come back into compliance. They also would stipulate that nations not found to be in full compliance should no longer receive nuclear assistance from any other country (e.g., Russia to Iran to complete the reactor at Bushehr, which has been the "peaceful" justification for Iran's most dangerous nuclear activities) until the IAEA Board of Governors unanimously issues a clean bill of health.

Surely, if France can support such rules, so can Europe, the US, and its allies. If these nations unite, Russia, moreover, will likely follow, particularly if it receives a reward. (Here, one might start with the cost-free nuclear cooperative agreement Moscow has been seeking for so many years from the US.)

Finally, the US and its allies need to pace themselves. In the end, the only sure path to nonproliferation is more moderate self-rule and increased arms restraint backed by US and allied military resolve and economic cooperation. Iran's current rulers, for sure, will have to go. Until then, though, bombing or bribing Tehran should be put aside in favor of tightening up and enforcing the rules to keep others from following Iran's example.

Henry Sokolski is executive director of the Nonproliferation Policy Education Center in Washington, DC, and is editor with Patrick Clawson of “Checking Iran’s Nuclear Ambitions” (US Army War College, 2004).