Iranians and Americans alike are weary of war in the Middle East and the many high costs. Both nations may try to harness that weariness. “By exercising restraint in responding to Washington’s provocations, Iran could play on American voters’ opposition to endless wars in the Middle East and help upend US President Donald Trump’s bid for reelection in November,” explains author Dilip Hiro. Meanwhile, Iranian protesters have turned out in force, demanding resignations after their government admitted to firing missiles that brought down a Ukrainian passenger jet, killing 176. Iranian officials apologized. Hiro suggests that US reliance on military tactics rather than diplomacy, killing Qasem Soleimani in Baghdad, has increased Trump’s political vulnerability: “Iran and its proxies in the region will engage in more reprisals, carefully timed to damage Trump’s re-election chances at critical moments.” – YaleGlobal

LONDON: By exercising restraint in responding to Washington’s provocations, Iran could play on American voters’ opposition to endless wars in the Middle East and help upend US President Donald Trump’s bid for reelection in November. Even though Hossein Salami, commander of the Revolutionary Guards, told Parliament, “I have never been so ashamed in my entire life,” anti-government protestors in Tehran demand the ouster of senior officials while pro-government citizens demonstrated in support of Maj. Gen. Qasem Soleimani and against the United States.

So far, the contrast in the two adversaries’ behavior is stark since Trump withdrew from an international denuclearization agreement with Iran in 2018. Trump has applied maximum economic pressure on Iran while hollowing out traditional US procedures for formulating national security policy. He has acted on his whims, ranging from last-minute cancellation of missile strikes on three Iranian targets in June to drone assassination of Soleimani, Iran’s most effective military leader, on 3 January.

Since 2018, Iran responded incrementally – orchestrating sabotage of oil tankers in the Strait of Hormuz area, masterminding missile and drone attacks on Saudi oil facilities, and then encouraging Iraqi proxies to compel US troops in Iraq to depart. In its latest move, Iran gave three hours advance notice through Iraq’s acting Premier Adil Abdul-Mahdi before firing missiles at two US-Iraq bases, which fell outside the perimeter and caused no casualties.

An unintended consequence of super-charged Iranian-American tensions was a jittery unit of Iran’s air defense system mistakenly firing a missile at a Ukrainian civilian aircraft carrying 176 people minutes after it took off from Tehran’s international airport. After three days, the Iranian government conceded it was a “disastrous mistake.”

By assassinating Soleimani near the Baghdad airport, the Trump administration inducted Iraq into its ongoing struggle with Iran. Angered by Washington’s violation of Iraq’s sovereignty, its lawmakers called on the government a) to work to end the presence of any foreign troops on Iraqi soil and b) cancel its 2014 request for assistance from the US-led anti-ISIS coalition in the aftermath of Baghdad’s declaration of victory over the Islamic State in December 2017. Accomplishing b) would require new legislation to cancel the existing agreement. This enabled Abdul-Mahdi to tell Matthew Tueller, US ambassador to Iraq, that any withdrawal of foreign troops would apply to combat troops and not those providing training and logistic support, as is the case with most of the 5,200 American soldiers.

The murder of Iran’s leading general has boosted those who want to bring about the exit of US troops from Iraq, while failing to advance Washington’s aim to weaken Iran’s influence in the region. Still, protests over the downed aircraft spread throughout Iran. Some conservative newspapers called for resignations of top officials. Trump tweeted in Farsi, demanding that Iran not harm the protesters. 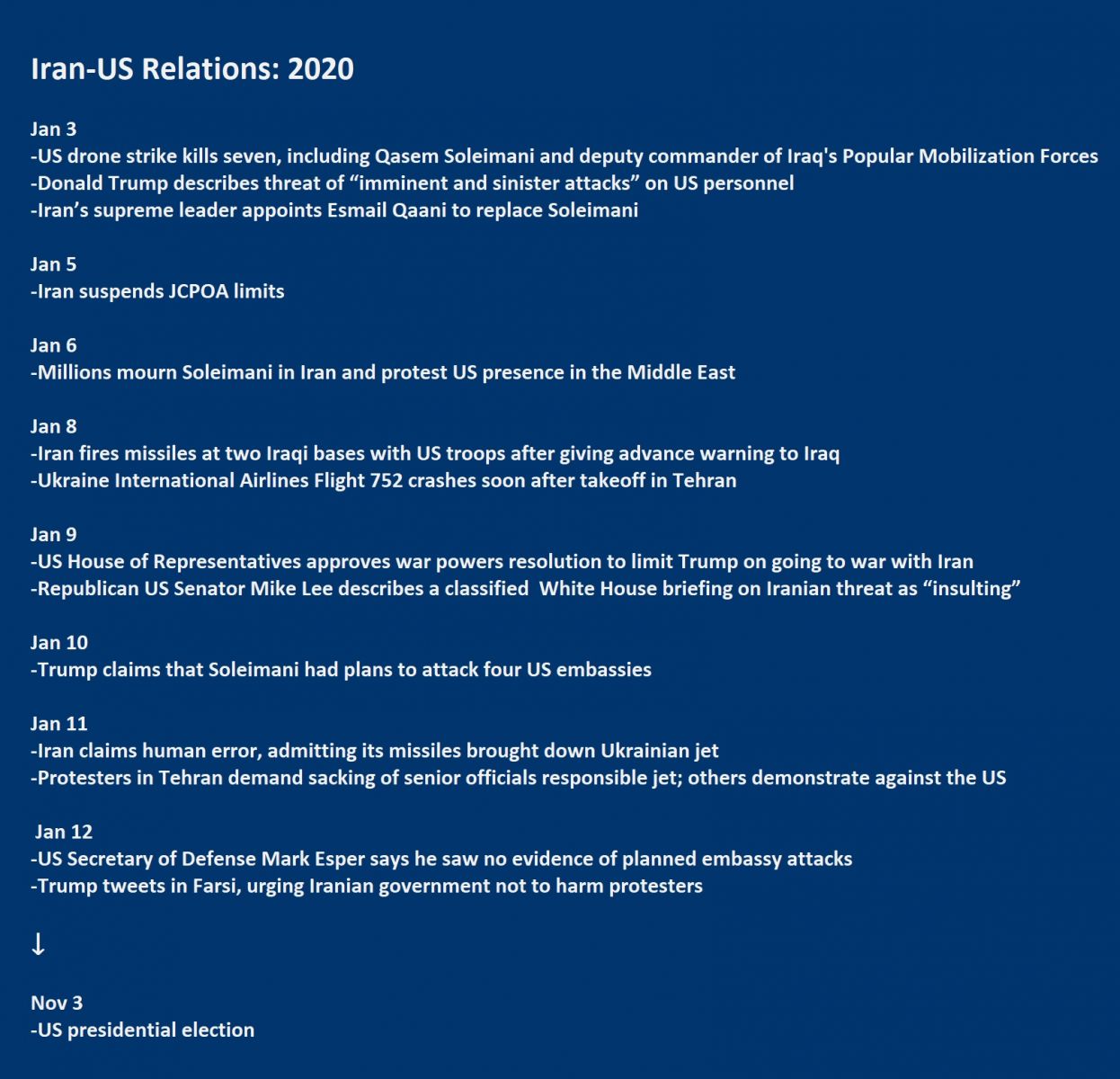 Senior Pentagon officials were stunned, according to the New York Times, when Trump chose the most extreme option of killing Soleimani while overlooking such alternatives as US airstrikes on Iranian ships or missile facilities or against Tehran-backed militia groups in Iraq. Trump’s authorization of the extrajudicial killing of a senior military commander of a sovereign state constituted a major military act. In such instances, the White House traditionally gives warning to senior members of Congress. Trump did not contact House Speaker Nancy Pelosi or Senate minority leader Chuck Schumer.

On 9 January, the House of Representatives passed a war powers resolution by 224 to 194 votes, limiting Trump’s power to strike Iran without congressional authorization or unless “use of the Armed Forces is necessary and appropriate to defend against an imminent armed attack upon the United States.” Cracks appeared in Trump’s Republican base. Three Republican representatives joined Democrats, and two Republican senators expressed fury at the “insulting and demeaning” classified military briefing about the imminent threat posed by Soleimani. Leading Democratic presidential candidates were unanimous in condemning Trump. Joe Biden warned that Trump’s recklessness could leave the United States “on the brink of a major conflict across the Middle East.”

The Trump administration’s description of Soleimani’s killing as a preemptive defensive strike to abort an alleged imminent plan to orchestrate attacks on US personnel in Iraq fell apart when Abdul-Mahdi referred to a scheduled 3 January meeting with the commander. The topic: the Iranian government’s response to a Saudi message Abdul-Mahdi had delivered to achieve “an important breakthrough in the situation in Iraq and the region.”

Soleimani’s death initially united Iranians across the political spectrum. On 6 January, millions of mourners in Tehran slowly passed his flag-draped coffin mounted on a raised platform above their heads – scenes reminiscent of the 1989 funeral procession of Ayatollah Rohollah Khomeini, founder of the Islamic Republic of Iran. Soleimani’s death provided the regime’s leadership a cause célèbre to rally the nation against a hegemonic United States and its president, who through secondary sanctions have caused Iran’s economy to shrink by more than 8 percent and fueled inflation to nearly 50 percent. The economic woes led to serious nationwide demonstrations in November that the government suppressed with an iron fist.

Likewise, earlier street protests in Iraq against rampant corruption and Iran’s interference in Iraq’s domestic affairs gave way to condemnation of the United States. The Iraqi National Security Council, chaired by Abdul-Mahdi, was quick to condemn the US drone attack for violating the country's sovereignty. So too did Grand Ayatollah Ali al-Sistani, the highest religious authority for most Shias.

Sistani’s fatwa in 2014 called on Iraqis to fight ISIS. That led to the formation of the voluntary Popular Mobilization Forces that played a leading role in ground fighting with the rabidly anti-Shia ISIS forces while the United States provided critical air cover. After ISIS was put on the defensive in 2016, the forces were integrated into Iraq’s regular military in stages.

With the extraterritorial branch of Iran’s Islamic Revolutionary Guard Corps, the Quds Force, undertaking training, arming and directing of the volunteers, Tehran expanded its influence in Iraq. The plan was so successful that every member of successive Iraqi cabinets was vetted for his stance on Iran, according to 700 pages of secret 2014-2015 documents published by the New York Times and Intercept.

Actually, as far back as 2009 in a secret cable to the State Department, Christopher Hill, then US Ambassador to Iraq, headlined, “The Great Game, in Mesopotamia: Iraq and Its Neighbors, Part I,” noting that “Iranian influence in Iraq remains pervasive, as Tehran manipulates a range of levers to mold Iraq’s political, religious, social, and economic landscape.” Roots of the tight bonds were laid in the 1980s during the anti-Shia presidency of Saddam Hussein, 1979 to 2003, when Shia leaders took refuge in Iran. Abdul-Mahdi was a guest of the Iranian regime as was former Premier Nouri al-Maliki.

Soleimani, 62, stood out for his charisma and strategic experience, and Iran’s footprint in Iraq, Syria, Lebanon and Yemen will remain intact. The senior commander gave much operational freedom to his lieutenants in these countries. Thus, Iran’s Supreme Leader Ayatollah Ali Khamenei appointed Soleimani’s long-time deputy, Esmail Qaani, as his successor within 12 hours of the death.

Tehran’s strategic alliance with Damascus dates back to the founding of the Islamic Republic of Iran in 1979. Iran’s ambassador to Syria, Ali Akbar Mohtashamipur, was instrumental in merging several Shia groups in Lebanon to form Hezbollah in 1982. And Saudi-led military intervention in Yemen’s long-running civil war since 2015 created an alliance between Shia Houthi rebels and Iran.

By turning to military tactics in his dealings with Iran, Trump made himself vulnerable to Tehran’s responses. Iran and its proxies in the region will engage in more reprisals, carefully timed to damage Trump’s reelection chances at critical moments. In short, by failing to curb his impetuosity in matters of war and peace, Trump has become hostage to the decisions of Iran’s leaders.

The EU Splits With Trump on Iran Nuclear Deal

Russia-Iran-Turkey Alliance Puts the US on Back-Foot

Two Opposing Middle East Alliances for the US