Iran’s Nukes in a Power Game

World leaders disagree about how to control Iran’s nuclear program. With respect to Iran’s steadfast dedication to preserving its uranium-enrichment program, the US and the EU-3 countries are upfront – they want to halt Iran before the program advances any further. China and Russia agree that Iran should not acquire nuclear weapons, but disagree with the US and Europe about how to contain Iran. The two nations calculate not only the risks of the Iran program, but also their relations with the US as the world’s sole superpower. US decision-making preceding the Iraq war set a precedent for unilateral action that both China and Russia oppose. As China and Russia increasingly view themselves in competition with the US, Iran’s enrichment program has become a test of their bargaining power with Washington on broader strategic issues. While the US and the EU-3 sound alarms about Iran, and China and Russia straddle the fence, the Arab governments have been unruffled about proliferation in their vicinity. Most Arab leaders would prefer the Middle East to be a nuclear-free zone, but Israel likely won’t give up their nuclear weapons any time soon. So most Arab leaders expect that nuclear weapons in the hands of Iran could deter any attacks from the US or Israel. – YaleGlobal

Iran’s Nukes in a Power Game 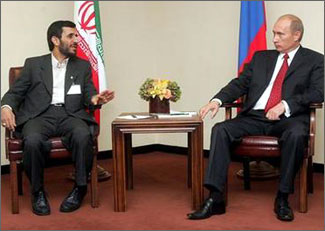 ALEXANDRIA: When one reads the profusion of analysis on Iran's determination to continue its uranium-enrichment program, it becomes clear what the US and the EU-3 countries – Germany, France, and the UK – want to achieve. They expect Iran to abandon its uranium-enrichment program, once and for all. The role of China and Russia in this controversy, on the contrary, is confusing. They want to play a role in resolving the issue, but not by making it easy for the US to take any military action against Iran. But one hears little on the subject about the position of Arab states, especially those in the immediate neighborhood of Iran.

Iran has continued its uranium-enrichment program. Even though it intermittently insists that it has no intention to develop nuclear weapons, three issues make the US and Europe suspicious: First, Iran kept its uranium-enrichment program a secret for some time. In 2002, the Mujahideen-e-Khalq brought to the world's attention two secret nuclear plants at Natanz and Arak that created ample suspicion about Iran's desire to develop nuclear weapons. Second, Iran has done business with Pakistan's nuclear scientist, Dr. A. Q. Khan, who has been widely regarded as a rogue proliferator. Third, Iran also has a highly active ballistic missile development program.

Iran's detractors in the West argue that, given that the nation has the world's third largest oil and second largest gas reserves, it does not have any reason to be so determined about developing nuclear know-how. Second, they also conclude, rightly or wrongly that, considering its highly active ballistic missile program, Iran will have no difficulty capping those missiles with nuclear weapons, once it acquires that know-how. Moreover, the US is suspicious that China or Russia, or even North Korea, would be more than happy to help Iran in that regard. Apart from the opportunity to constrain US power, Iran has plenty of hard cash, thanks to the soaring price of oil, which makes it an attractive partner.

China and Russia have bitter memories that the US originally did not want to go to the UN regarding its contention that Iraq was developing weapons of mass destruction. The US eventually sought the first resolution from the world body. However, when it became apparent that France would veto the second resolution sanctioning military action, the Bush administration made a unilateral decision to invade Iraq. As an ironclad guarantee that the Bush administration would not sabotage the UN sanctioning process involving Iran, both China and Russia wanted no strong language in a UN Security Council resolution aimed at setting a timetable for punishing Iran. In the resolution passed on March 29, 2006 – adopted unanimously by 15 members – they achieved that purpose. The resolution calls on Iran to suspend its uranium-enrichment program, but it is nonbinding. More to the point, it does not commit the UN to act against Iran, and clearly avoids language that might set the stage for sanctions or military maneuvers – a clear victory for Beijing and Moscow.

There is little doubt, however, that the US and the EU-3 countries would apply pressure on China and Russia either to talk Iran into abandoning its uranium-enrichment program and make its nuclear activities transparent to the International Atomic Energy Agency, or adopt a tougher line, if Iran refuses to meet the demands of the latest UN Security Council resolution. 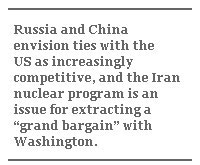 As much as China and Russia engage in the diplomatic maneuvers to pressure Iran, they are not expected to toe the US party line. Their own respective great power agendas play a silent, but potent role in their maneuvers involving Iran. Russia is getting increasingly frustrated about the US “crowding” the immediate neighborhood. President Vladimir Putin bristled at the criticism that the recent elections in Belarus were rigged, simply because they did not bring about the breakup of ties between Russia and what the Western media derisively depict as “the last dictatorship in Europe.” Russia also remains on the defensive about the proposition from the West that it is backing away from democracy. US-Russian competition in Central Asia has become rather nasty.

China is equally annoyed at the Bush administration's intermittent depiction of it as competitor or even as a “potential adversary.” Beijing was displeased by reports that the recently signed US-India nuclear deal was also aimed at “containing” China.

In view of these conflicting agendas, both Russia and China envision their ties with the US as becoming increasingly competitive. Consequently, Iran’s nuclear enrichment program emerges as an issue where the two countries have ample maneuvering space to extract a “grand bargain” with Washington regarding issues that are of great strategic significance to each of them.

What about Iran's Arab neighbors? They certainly do not want Iran to develop nuclear weapons. However, they do not share the fear-mongering analyses of the US or the EU-3 countries about what happens if Iran does develop those weapons. What the Arab states really want is a permanent declaration of their region as a nuclear-free zone, a development that would deprive Israel of its current large nuclear arsenal.

However, knowing that the Jewish state is not about to give up those weapons, and that the US is not about to insist that it does so, the Arab states have learned to develop a relaxed perspective on the nuclear issue involving Iran. They assume that, even if that country were to develop nuclear weapons, it would use them only as deterrence against the US and Israel. At the same time, the Arab states also know that the US nuclear umbrella already protects them against any potential nuclear threats. In the meantime, the Arab states appear content about letting the US and the EU-3 countries to do all the “dirty bidding” related to pressuring Iran to give up its uranium-enrichment program. In this complex interplay of strategic interests, what favors the Islamic Republic in the short run is the possibility that the US, China, and Russia might not agree on a common framework of action that would persuade Iran to give up its uranium option. However, the Arab states as well as China and Russia remain wary that President Bush has reserved for himself the option of preemptive action, reiterated in his latest National Security Strategy document issued in March 2006.

No persuasive evidence suggests that Iran is dedicated to developing nuclear weapons at this point. The nation might only be insisting on continuing its uranium-enrichment programs as a bargaining chip, especially to engage in direct talks with the United States. Only Beijing and Moscow are capable of pushing the Bush administration in that direction, and that might be their price for cooperation with Washington on this issue. However, they must also do it in a way that not only resolves the US-Iran conflict, but also improves their standing vis-à-vis the lone superpower.

Ehsan Ahrari is the CEO of Strategic Paradigms in Virginia. He was a professor at the US Air War College from 1990 to 1994 and at the Joint Forces Staff College, National Defense University, from 1994 to 2005. His website: www.ehsanahrari.com.