Muslims initially condemned Al Qaeda’s 2001 attacks on the US. But then the US invaded Iraq, triggering chaos that could overwhelm more than one country throughout the Middle East. As a result, even more moderate Muslims support anyone who defends Muslim lands and values against occupiers, particularly in Palestine and Iraq. Jihadists emerged during the early 1980s, opposed to Egypt and Israel seeking peace; then during the 1990s in Afghanistan, in armed opposition to the Russian invasion. But the war in Iraq has unleashed deep bitterness and instability throughout the region, and many more young Muslims with minimal education aspire to a form of jihad more volatile and deadly than what was seen in the previous decades. Instead of containing terrorism with war in Iraq, the US has fortified it, giving terrorists a new base of operations, argues international affairs professor and author Fawaz Gerges. US voters have rejected their president’s strategies for the Iraq war. If US leaders and Iraqis can find a way to stop fighting and set goals that benefit ordinary Muslims, then jihadists may still be discouraged and political stability for Iraq may yet be a reality. – YaleGlobal

US intervention infuriates even mainstream Muslims, giving Al Qaeda and other jihadists a boost
Fawaz A. Gerges
Thursday, December 21, 2006 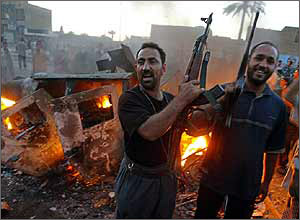 CAIRO: Five years after the September 11 attacks, Al Qaeda's notion of a clash of religions is no longer farfetched. In both camps, tiny minorities beat the drums, rallying the faithful to fight in a war they believe was caused by the other. Ordinary Muslims, not just Islamists and jihadists, view the “war on terror” as a war against their religion and values. Many Muslims who had initially condemned Al Qaeda and 9/11 are having second thoughts about bin Laden’s fight against the Americans and their allies. Bin Laden has gained credibility in their eyes. “Now he is defending the Ummah,” confided a young rising poet, Massoud Hamed.

Top American policymakers – as opposed to intelligence officers – have little appreciation for how their military involvement in Iraq, as well as their staunch support of Israel, is radicalizing mainstream Muslim opinion and legitimizing radical groups that wage armed struggle in Iraq, Palestine, Afghanistan, Lebanon and elsewhere. “Al-Muqawama,” or resistance, is the most popular slogan in the Muslim world today, resonating deeply among men and women of all ages with religious and nationalist orientation alike. The plight of the Palestinians and Iraqis, in particular, echoes widely.

I have yet to hear a Friday sermon in which believers are not reminded to lend a helping hand to their beleaguered Palestinian and Iraqi counterparts. The ability of Lebanon’s Hezbollah, or Party of God, to resist the Israeli military onslaught has lent credence to Al-Muqawama proponents. “Hezbollah’s victory over the mighty Israeli army had broken the psychological barrier of fear among Muslims,” a leading political activist told me. “We no longer fear American and Israeli military power. We are armed with faith.”

Furthermore, while Muslim public backing for global jihad – as opposed to local jihad – is limited, Iraq today is one of the most promising theaters for the movement’s revival. Local jihad focuses only on occupied Arab and Muslim territories like Palestine, Iraq, and Afghanistan, while global jihad’s boundaries extend wide and far to New York, Washington, Madrid and London. The American-led invasion and occupation of Iraq has given rise to a new generation of jihadists who differ dramatically from the first generation – the founding fathers who killed Egyptian President Anwar Sadat in 1981 – and the second generation, Afghan Arabs or Al Qaeda.

Members of the first generation of the jihadist movement – the pioneers – came from the middle class and upper middle class and graduated from top scientific and social sciences departments in Egypt’s best universities. They possessed a complex, though distorted, grasp of various schools of Islamic thought and laid the theoretical foundation of jihadism utilized by the Al Qaeda generation and the Iraq generation alike.

In contrast, many of the Iraq generation of jihadists, who represent a tiny minority of all fighters in Iraq, come from the poverty belts of Arab and Muslim ghettos and streets. Many have shockingly little religious and formal education. I met teenagers who aspired to join the fight against the American occupiers and were nearly illiterate, with no grasp of interpretations of religious texts. They lack the financial means – a few hundred US dollars – to travel to Iraq, but they and others like them form a huge pool of potential recruits for global jihad.

Moreover, unlike the first and second generation, the Iraq jihadists, few as they are so far, do not make a clear distinction between the near enemy (Muslim ruling “renegades”) and the far enemy (the US and its allies). They wage an all-out war against internal and external enemies alike. The lines of demarcation between Muslims and non-Muslims have also become blurred. The Iraq jihadists are willing to kill thousands of fellow Muslims who, in their eyes, are kufar, or apostates, and are as dangerous, if not more so, as Americans and Westerners.

In my conversation with members of the first generation and some of the Afghan-trained Arab fighters, they were at a loss to explain the beastly acts of terror carried out by their Iraq counterparts. While jihadists are conspiratorial by nature, they conceded that the indiscriminate killings of Muslims and civilians are a byproduct of the Iraq generation’s scanty religious education, low social status and America’s violation of Muslim sanctity.

“Foreign recruits to Iraq are vulnerable to Takfiri ideology [excommunication of Muslims and non-Muslims], which puts them on the wrong path,” a leader of the first generation told me. “There is no other way to make sense of the proliferation of suicide bombings – thousands of operations – against fellow believers in Iraq.”

In other words, foreign recruits to global jihad in Iraq are raw material easily molded by Al Qaeda leaders there. They serve as human bombs, carriers of death and destruction. We are witnessing further mutation and militarization with every jihadist generation. Who ever thought that the Iraq generation would be more violent than the Al Qaeda generation?

Both mainstream and militant Islamists whom I interviewed distanced themselves from the Iraq jihadists, “a liability to the honorable resistance,” as one put it. However, the Iraq jihadists no longer rely on foreign recruits, instead quickly winning some Sunni Iraqis to their cause. During the last year dramatic transformation has taken place within the Iraq generation, with the homegrown Iraqi contingent outnumbering Arab recruits. Although they are a tiny minority within the overall Iraq resistance, the Iraq generation of jihadists is becoming more Iraqi by the day. That means there are more Iraqi jihadists than foreigners, and that Al Qaeda has succeeded in establishing a home-base in the war-ravaged country.

Once the Americans exit Iraq, jihadists will face stiff opposition from the Sunni community that now provides them with protection and shelter. Jihadists would become a liability to the Sunni Arab community that’s already trying to distance itself from their dark vision. However, Al Qaeda and its affiliates feed on turmoil and chaos. Al Qaeda is in the process of establishing an indigenous base in war-ravaged Iraq. If the country sinks into all-out war, it will become to global jihad what Afghanistan was in the 1990s and early 2000s. “America invaded Iraq under the pretext of [the US] war against Al Qaeda,” Kamal Habib, a leading radical Islamist told me, laughing. “But America succeeded in reviving a dormant Al Qaeda and the global jihad movement. It has also awakened the Ummah from its political slumber.”

The US debate over Iraq focuses mainly on the effects of the American military presence on Al Qaeda and its affiliates – a tiny fringe in the political landscape in Iraq and beyond – while largely ignoring the negative effects of the war on mainstream Muslim opinion worldwide. The American military presence in the Arab heartland has become a liability, not an asset, to long-term political stability in Iraq and maintenance of US vital interests in the region, particularly the fight against global jihad.

The sad irony is that the American war in Iraq has proved to be counterproductive to the struggle against the global jihad movement and has alienated the floating middle of Muslim public opinion. It has given Al Qaeda central and its affiliates a new lease on life.

Even US intelligence services have reluctantly arrived at the same conclusion. The US public had turned against the costly Iraq adventure. Results of the mid-term US elections show the American people’s dissatisfaction with “staying the course” in Iraq. This correcting mechanism might herald a fresh start for Iraq and the US. One would hope that Iraq is still salvageable, and that it is not already too late.

Fawaz A. Gerges, a Carnegie Scholar and visiting professor at the American
University in Cairo, is the author of “Journey of the Jihadist: Inside Muslim Militancy.” He holds Christian Johnson Chair in Middle East and International Affairs at Sarah Lawrence College.