It Takes Two Hands to Clap

Two days after Afghanistan's parliamentary elections in September, President Hamid Karzai boasted that his country "now has a constitution, a president, a parliament, and a nation fully participating in its destiny." But as journalist Ahmed Rashid writes, that is not exactly the case. Despite Karzai's previous promises of reform and nation-building, conditions in Afghanistan have hardly improved: Warlords and drug barons remain in provincial, parliamentary, and cabinet-level positions, while the country lacks substantial infrastructure and state institutions. With a decreasing foreign commitment to battle heated Taliban insurgencies, Afghanistan may be in dire straits. Karzai may still have time to get his country back on course, should he choose to fulfill his previous promises, but he cannot do it alone. "Ultimately, only a renewed Western commitment – not a withdrawal – will give the Afghans the confidence to tackle their monumental problems," writes Rashid. "It will continue to take two hands to clap in order to rebuild Afghanistan." – YaleGlobal

It Takes Two Hands to Clap

Afghanistan will require both domestic and international action for any hope of rebuilding
Ahmed Rashid
Thursday, October 6, 2005 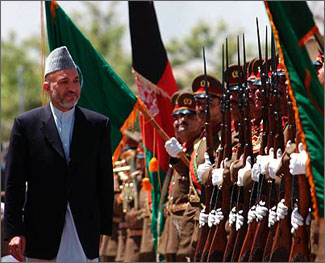 LAHORE: On October 3, a crowd of a least 5000 Afghanis gathered in Kabul to protest the murder of a prominent parliamentary candidate and demanded the resignation of powerful warlord General Atta Mohammed, a provincial governor. Just a few days earlier, Interior Minister Ali Ahmad Jalali, one of President Hamid Karzai's closest aides – highly respected for his honesty and desire for radical reforms – resigned, in what his friends say is a mood of "anger and frustration."

Karzai faces challenges both from the Afghan people and from elites within his own government. Clearly, though Afghanistan's parliamentary elections have concluded, the hard part is yet to come. At least 1200 people have been killed this year in Taliban-related violence, and the presidential and parliamentary elections cost the international community nearly US$300 million. Both the international community and the Karzai administration now face the challenges of building stable, functioning state machinery and infrastructure, while fighting off a Taliban insurgency, warlordism, drug trafficking, and corruption.

Little of this agenda has been accomplished in the four years following the defeat of the Taliban. And now the two components essential to success – the Western alliance (the US-led coalition, NATO, and international aid donors) and the Karzai government – appear to be faltering even as a resurgent Taliban escalate their offensive.

Two days after the September 18 elections for a new parliament and 34 provincial councils, Karzai proudly told reporters that Afghanistan, "now has a constitution, a president, a parliament, and a nation fully participating in its destiny." However, he has failed to ensure that the political architecture, constructed at enormous loss of life and expense, matches reforms on the ground.

The low voter turnout showed growing public disillusionment with the government and the slow pace of reforms. Compared to the 70 percent of votes cast in the presidential elections a year ago, only 53 percent turned out for the parliamentary elections. In Kabul, the most politicized city in the nation, the turnout was only 36 percent.

Meanwhile, the Taliban insurgency demonstrated its staying power by an unusual and devastating urban attack, when on September 28, a suicide bomber killed nine Afghan soldiers and wounded 36 outside a military training center in Kabul. Afghans, including Karzai, are deeply frustrated that the Taliban leadership continues to live and operate from Pakistan.

The current situation differs drastically from the hopes and visions for Afghanistan a year ago. After the presidential elections, Karzai promised to use the coming 12 months to carry out a vigorous reform agenda that would change Afghanistan from the bottom up. Instead, through his actions – and more importantly, inaction – he has wasted the past year.

Despite the support of the US embassy and the United Nations, Karzai abandoned the reform agenda in favor of maintaining the status quo and his own power. Afghanistan has never had a strong central government, and only now has Karzai managed to extend the government's writ to provinces beyond the center. Still, an enormous amount of crucial legislation (to encourage local and foreign investment, set up state institutions, establish a modern judiciary, and so on) has not been carried out.

Encouraged by their leader's pledge to enforce accountability for the massive human rights violations committed by warlords over the past 25 years, Afghans expected that he would continue a vigorous campaign against them. Instead, warlords have only been reshuffled among top cabinet or provincial jobs. Not a single drug baron – many of whom are well-known warlords, cabinet ministers, and commanders – has been outed or convicted.

And the initial election results indicate that the warlords and their supporters will dominate the future parliament. They will block every reform agenda Karzai may want to make and demand he retire progressives in the cabinet and install their own nominees. Instead of spurring on development goals and reconstruction, the parliament will likely become a major hinderance for both.

Further, Karzai's refusal to allow a party political system to flourish before the elections – a hallmark of any serious democracy – will also allow individual warlords to exert unnecessary influence. An indecisive man at the best of times, Karzai is unlikely to either control or confront the new parliament. Karzai believes that political parties were responsible for destroying Afghanistan in the past and that he can control parliament through one-on-one meetings with representatives.

While things look bleak within Afghanistan, Western countries are showing signs of wanting to back off just when they are needed the most. "The need for the international community to have a commitment here and patience is absolutely essential," said Lt. Gen. Karl Eikenberry, the head of US forces in Afghanistan.

The United States, however, may be decreasing its commitment. US Secretary of Defense Donald Rumsfeld indicated his desire to see up to a quarter of the 18,000-strong US forces out of Afghanistan by next spring, to be replaced by NATO troops. Further, battered by the insurgency in Iraq, the hurricane in Louisiana, and historically low poll ratings, President George W. Bush is desperate to show the American people a success story in the war against terrorism and also bring some troops home from somewhere.

Plans call for the US-led coalition fighting the Taliban and the separate NATO-led peace-keeping force to merge in the spring of 2006. But major NATO countries, including France, Spain, and Germany, are resisting the merger or refusing to take part in counter-insurgency fighting. Other European members are refusing to commit more troops to Afghanistan – even in a peace-keeping mode.

The international donor community is faltering in its commitment to provide sufficient aid for reconstructing the country so that a self-sustaining economy can emerge. Western donors have committed on average about US$2.5 billion every year for the past four years for reconstruction, but less than half that money has actually been disbursed. Four years on, not a single new dam, power station, or major water system has been built. Afghanistan remains the third poorest country in the world.

Though Western donors are also financing the training of an Afghan army, police, justice system, and bureaucracy, the process is too slow and funds are inadequate. Jean Arnault, the UN s envoy to Afghanistan says the Afghan people "were exasperated" over the inability of the bureaucracy and the judiciary to function as it should.

Karzai faced bigger problems in 2001, but had always sided with the public's desire for change, reform, and an end to past abuses. Now, after four years and little change in their lives, people are becoming frustrated. Karzai seems to be acting against the people's wishes by retaining warlords, refusing to allow parties, or carrying out accountability. However, he still has the time to rediscover his vision for the nation.

Afghanistan's political system will not succeed without steady and substantial assistance from the international community over the long term. Ultimately, only a renewed Western commitment – not a withdrawal – will give the Afghans the confidence to tackle their monumental problems. It will continue to take two hands to clap in order to rebuild Afghanistan.

Ahmed Rashid is the author of “Taliban” and “Jihad” and is a correspondent for The Daily Telegraph for Pakistan, Central Asia and Afghanistan.